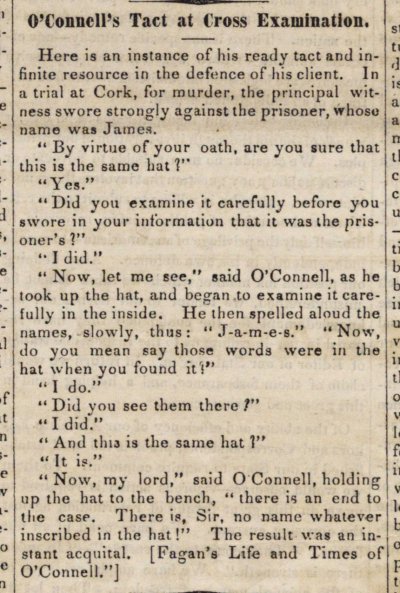 Here is an instance of his ready tact and infinite resource in the defence of his client. In a trial at Cork, for murder, the principal witness swore strongly against the prisoner, whose name was James. "By virtue of your oath, are you sure that this is the same hat?" "Yes." "Did you examine it carefully before you swore in your information that it was the prisoner's?" "Idid." "Now, let me see," said O'Connell, as he took up the hat, and began to examine it carefully in the inside. He then spelled aloud the names, slowly, thus: "J-a-m-e-s." "Now, do you mean say those words were in the hat when you found it?" "I do." "Did you see them there?" "I did." "And this is the same hat?" "It is" "Now, my lord," said O'Connell, holding up the hat to the bench, "there is an end to the case. There is, Sir, no name whatever inscribed in the hat!" The result was an instant acquital. [Fagan's Life and Times of O'Connell."]