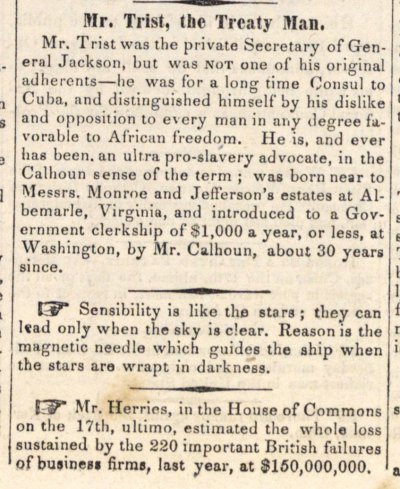 Mr. Trist was the private Secretary of General Jackson, but was NOT one of his original adherents - he was for a long time Consul to Cuba, and distinguished himself by his dislike and opposition to every man in any degree favorable to African freedom. He is, and ever has been, an ultra pro-slavery advocate, in the Calhoun sense of the term; was born near to Messrs. Monroe and Jefferson's estates at Albemarle, Virginia, and introduced to a Government clerkship of $1,000 a year, or less, at Washington, by Mr. Calhoun, about 30 years since. Sensibility is like the stars; they can lead only when the sky is clear. Reason is the magnetic needle which guides the ship when the stars are wrapt in darkness. Mr. Herries, in the House of Commons on the 17th, ultimo, estimated the whole loss sustained by the 220 important British failures of business firms, last year, at $150,000,000.