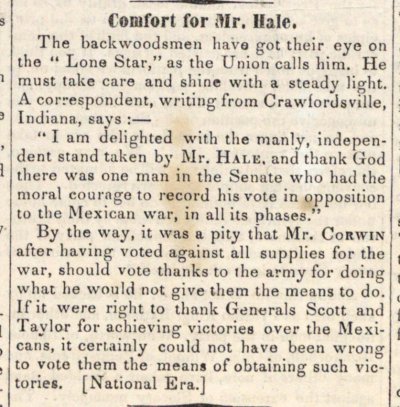 The backwoodsmen have got their eye on the "Lone Star," as the Union calls him. He must take care and shine with a steady light. A correspondent, writing from Crawfordsville, Indiana, says : - "I am delighted with the manly, independent stand taken by Mr. Hale, and thank God there was one man in the Senate who had the moral courage to record his vote in opposition to the Mexican war, in all its phases." By the way, it was a pity that Mr. Corwin after having voted against all supplies for the war, should vote thanks to the army for doing what he would not give them the means to do. If it were right to thank Generals Scott and Taylor for achieving victories over the Mexicans, it certainly could not have been wrong to vote them the means of obtaining such victories. [National Era.]