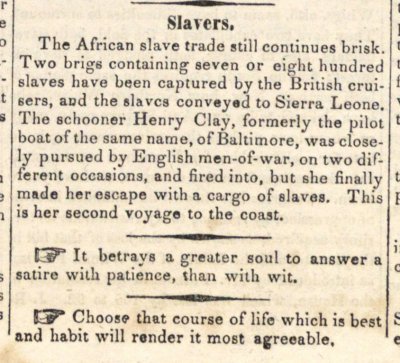 The African slave trade still continues brisk. Two brigs containing seven or eight hundred slaves have been captured by the British cruisers, and the slaves conveyed to Sierra Leone. The schooner Henry Clay, formerly the pilot boat of the same name, of Baltimore, was closely pursued by English men-of-war, on two different occasions, and fired into, but she finally made her escape with a cargo of slaves. This is her second voyage to the coast. It betrays a greater soul to answer a satire with patience, than with wit. Choose that course of life which is best and habit will render it most agreeable.