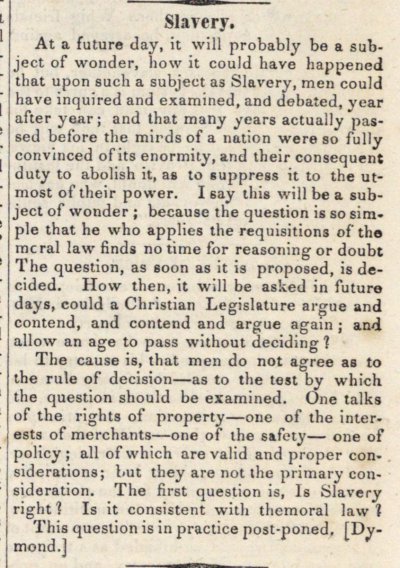 At a future day, it will probably be a subject of wonder, how it could have happened that upon such a subject as Slavery, men could have inquired and examined, and debated, year after year; and that many years actually passed before the minds of a nation were so fully convinced of its enormity, and their consequent duty to abolish it, as to suppress it to the utmost of their power. I say this will be a subject of wonder; because the question is so simple that he who applies the requisitions of the moral law finds no time for reasoning or doubt The question, as soon as it is proposed, is decided. How then, it will be asked in future days, could a Christian Legislature argue and contend, and contend and argue again; and allow an age to pass without deciding? The cause is, that men do not agree as to the rule of decision - as to the test by which the question should be examined. One talks of the rights of property - one of the interests of merchants - one of the safety - one of policy; all of which are valid and proper considerations; but they are not the primary consideration. The first question is, Is Slavery right? Is it consistent with the moral law? This question is in practice postponed, [Dymond.]