Mr. Clay In The Field Again 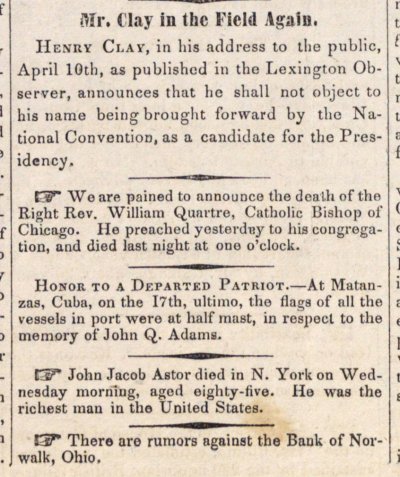 Henry Clay, in his address to the public, April 10th, as published in the Lexington Observer, announces that he shall not object to his name being brought forward by the National Convention, as a candidate for the Presidency. We are pained to announce the death of the Right Rev. William Quartre, Catholic Bishop of Chicago. He preached yesterday to his congregation, and died last night at one o'clock. Honor to a Departed Patriot. - At Matanzas, Cuba, on the 17th, ultimo, the flags of all the vessels in port were at half mast, in respect to the memory of John Q. Adams. John Jacob Astor died in N. York on Wednesday morning, aged eighty-five. Ha was the richest man in the United States. There are rumors against the Bank of Norwalk, Ohio.