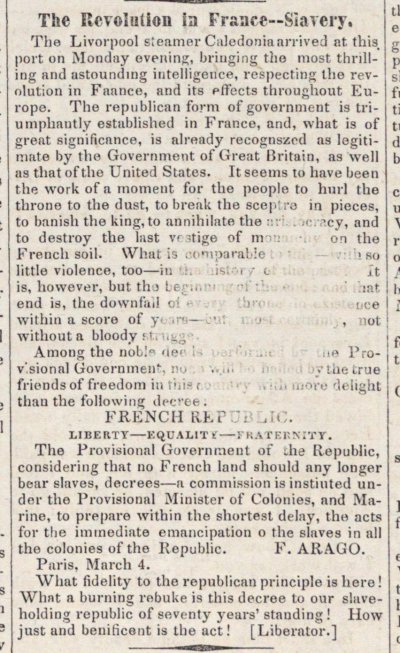 The Livorpool steamer Caledonia arrived at this port on Monday evening; bringing the most thrilling and astounding intelligence, respecting the revolution in France, and its effects throughout Europe. The republican form of government is triumphantly established in France, and, what is of great significance, is already recognized as legitimate by the Government of Great Britain, as well as that of the United States. It seems to have been the work of a moment for the people to hurl the throne to the dust, to break the sceptre in pieces, to banish the king, to annihilate the aristocracy, and to destroy the last vestige of monarchy on the French soil. What is comparable to this - with so little violence, too - in the history of ... It is, however, but the beginning of the end and that end is, the downfall of every throne in existence within a score of years - but most certainly, not without a bloody struggle. Among the noble deeds performed by the Provisional Government, none will be hailed by the true friends of freedom in this country with more delight than the following decree: FRENCH REPUBLIC. Liberty - Equality - Fraternity The Provisional Government of the Republic, considering that no French land should any longer bear slaves, decrees - a commission is instituted under the Provisional Minister of Colonies, and Marine, to prepare within the shortest delay, the acts for the immediate emancipation of the slaves in all the colonies of the Republic. F. ARAGO. Paris, March 4. What fidelity to the republican principle is here! What a burning rebuke is this decree to our slave-holding republic of seventy years' standing! How just and beneficent is the act! [Liberator.]