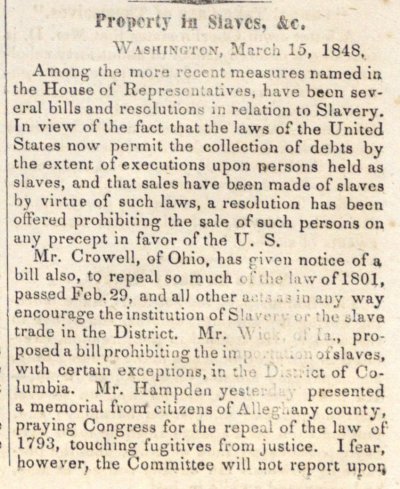 Washington, March 15, 1848, Among the more recent measures named in the House of Representatives, have been several bills and resolutions in relation to Slavery. In view of the fact that the laws of the United States permit the collection of debts by the extent of executions upon persons held as slaves, and that sales have been made of slaves by virtue of such laws, a resolution has been offered prohibiting the sale of such persons on any precept in favor of the U. S. Mr. Crowell, of Ohio, has given notice of a bill also, to repeal so much of the law of 1801, passed Feb. 29, and all other acts as in any way encourage the institution of Slavery of the slave trade in the District. Mr. Wick, of Ia., proposed a bill prohibiting the importation of slaves, with certain exceptions, in the District of Columbia. Mr. Hampden yesterday presented a memorial from citizens of Alleghany county, praying Congress for the repeal of the law of 1793, touching fugitives from justice. I fear, however, the Committee will not report upon this subject at all, though it has been the subject of much earnest consideration; and during the session, one of the Southern Senators has urged a more stringent law, for the reason that there is a want of power to arrest fugitive slaves. [Pittsburgh Gazette.]