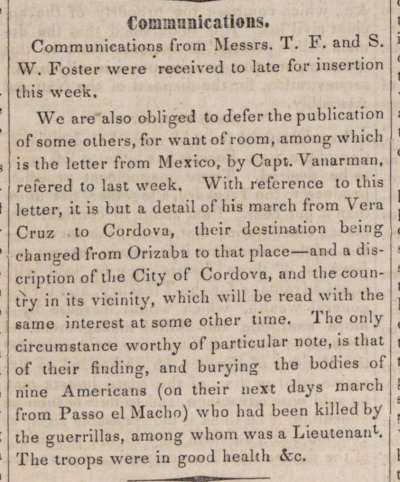 Communications from Messrs. T. F. and S. W. Foster were received to late for insertion this weÃ©fe, We are also c-bliged to defer the publicaron ofsome otliers, for want of room, among which is the letter from Mexico, by Capt. Vanarman, refered to last week. With reference to this letter, it is but a detail of his marcli from Vera Cruz to Cordova, their destination beitig lianged from Orizaba to that place - and a disliption of tlie City of Cordova, and thecouny in its vicinity, which will be read with the ame interest at some other time. The only ircumstance worthy of particular note, is that of their fincling, and burying the bodies of nine Americans (on their next days march rom Passo el Macho) who had been killed by ba guerrillas, among whom was a Lieutenan1. fhe troops were in good heakh Sec.