Fourth Of July--sons Of Temperance 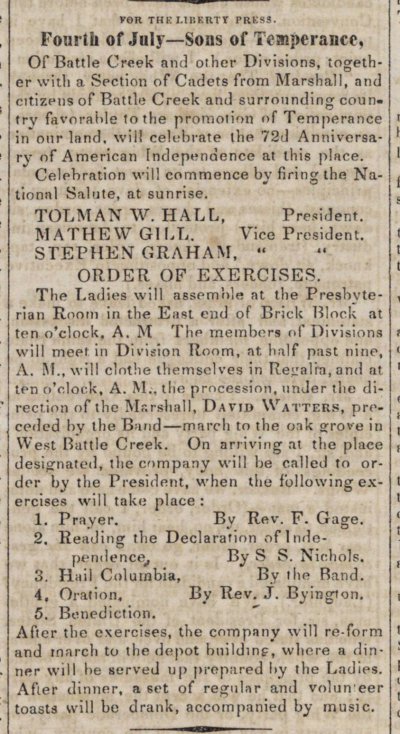 Of Battle Creek and olher Divisions, together with a Section of Cadets from Marshall, and citizens of Battle Creek and surrounding coun. trv favorable tothe promotion "f Temperance in our land, wil! celÃ©brate the 72d Anmversarv of American Independence at this place. Celebration will commence by firing the National Salute, at sunrise. TOLMAN W. HALL, President. MATHEW GILL. Vice President. stephen: graham, order of exercises. The Ladiea will assemble at the Presbyterian Room in the East end of Brick Blnck at ten o'clock, A. M The members of Divisions will meet in DivisiÃ³n Room, at half past nine, A. M., will clnthe themsolves in Rejialra, and at ten o'clock, A. M., the procession, nnjer the direction of the Marshall, David Watters, preceded by the Band - march to the oak grove in West Battle Creek. On arriying at the place desigfnated, the company will be called to order by the President, when the ibllowing exercises will taki: place : 1. Prayer. By Rev. F. Gage. 2. Reading the Declaration of litdopentlenci By S S. Nir:hols. 3. Hail Columbia, By the Band. 4. Oration, By Rev. J. Byingion. 5. Bonediction. After tlie exercises, the company will re-form and march to the depot building, wliere a dinner will be served up prepared by the Ladies. Afler dinner, a set of regular and voluneer toasts will be drank, accompanied by rnusic.