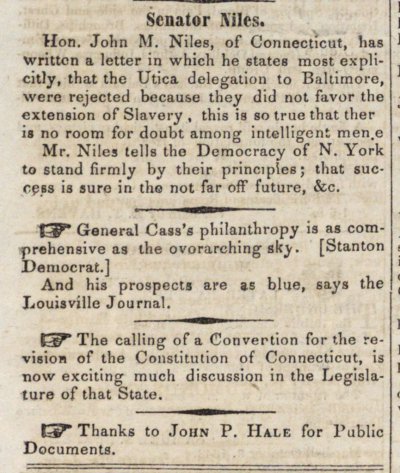 Hon. John M. Niles, of Connecticut, lias writtcn a letter in which he states most explicitly, that the Utica delegation to Baltimore, wero rejected because they did not favor the extensiÃ³n of Slavery , this is so true that ther is no room for doubt arnong intelligent men. e Mr. Niles tells the Democracy of N. York to stand firmly by their principies; that sucreBS is sure in tho not far off future, &c. CP" General Cass's philanthropy is as comprehensive as the ovorarching sky . [Stanton Democrat.] And his prospect are as blue, says the Louisville Journal. (3F The calling of a Convertion for the revisiÃ³n of the Constitution of Connecticut, is now exciting much discussion in the Legislature of that State. tS" Thanks to John P. Hale for Public Documenta.