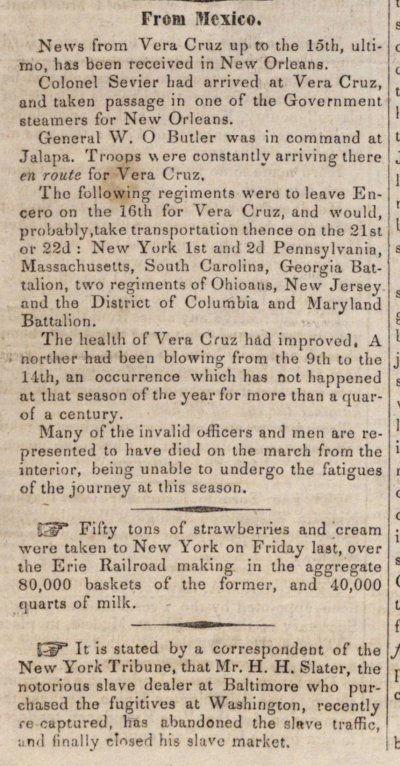 News from Vera Cruz up to the 15th, ultimo, has been received in New Orlean8. Colonel Sevier had arrived at Vera Cruz, and taken passage in one of the Government steamers for New Orleans. General W. O Butler was in command at Jalapa. Troops ere constantly arriving there en route for Vera Cruz, The fÃ¼llowing regiments wero to leave Encero on the IGlh for Vera Cruz, and would, probably.take transportation thence on the 21st or 22d : New York lst and 2d Pennsylvania, Massachuselts, South Carolina, Georgia Battalion, two regiments of Ohioans, New Jersey and the District of Columbia and Maryland Battalion. The hualth of Vera Cruz had improved. A northor had been blowing from the 9th to the 1 Ith, an occurrence which has not happened at that season of the year for more than a quaroÃ­ a century. Many of the invalid officers and men are represented to have died on the march from the interior, being unable to undergo the fatigues of the journey at this season. 1LT Fifty tons of strawberries and cream wuro taken to New York on Friday last, over the Erie Railroad making in the aggregate 80,000 baskets of the former, and 40,000 quarts of milk. L5P" It is stated by a correspondent of the New York Tribune, that Mr. H. H. Slater, the notorÃ­ous slave dealer at Baltimore who purchased the fugitivos at Washington, recently re captured, has abundoned the slftve traffic, und finally clseri his slavc market.