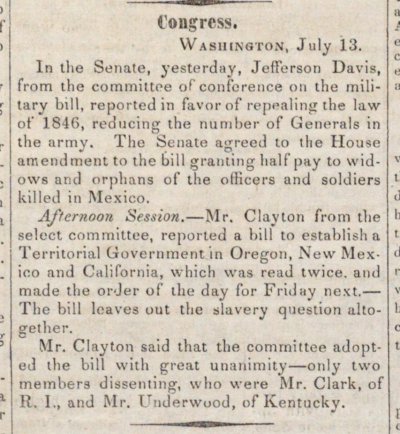 Washington, July 13. In the Senate, yesterday, Jefferson Davis, from the committee of conference on the military bilÃ­, reponed in favor of repealing the law of 1846, reducing the number of GenerÃ¡is in the army. The Sunate agreed to the House amendment to the bill granting half pay to widows and orpham of the officers and soldiers killed in Mexico. Afternoon Session. - Mr. Clavton from the select committee, reponed a bill to establish a Territorial Government in Oregon, New Mexico and California, which was read twice. and made the order of the day for Fridny next. - The bill leaves out the slavery question altogether. Mr. Clayton said that the committee adopted the bill with great unanimity - only two members dissenling, who were Mr. Clark, of R. I., and Mr. Underwood, of Kentucky.