Speaking Out In Meeting 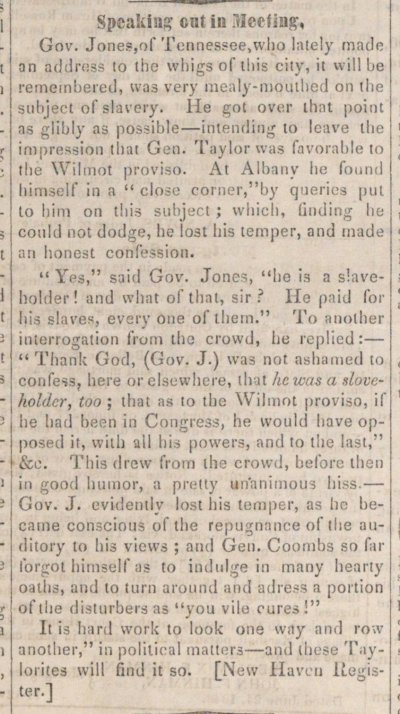 Gov. Jone?, of T ennessee.who lately made an address !o the whigs of ihis city, it will be remembered, was very raealy-moutlied on tlio subject of slavery. He got over ihat point as glibly as possibte - intending to leave the mpression that Gen. Taylor was favorable to the Wilmot proviso. At Albany lio found bimself in a " close corner,"by queries put lo liini on this subject ; which, linding he co;il(l Dot dodge, he lost his temper, and made an honcst confession. " Yps," said Gov. Jones, "he is a slavebolder! and what of that, sir ? He paid for liis slaves, every Ã¶ne of tliem." To another inlerrogation froni the crovvd, he replied: - " Thank God, (Gov. J.) was nor. ashamed to confesSj here or elsewhere, thut he was a slovekolder, too ; that as to the Wilmot proviso, f he liad been in Congress, he vvould have opposed it, wiih all hi.s powers, and to the last," &c. This drew from the crowd, before then in good humor, a pretty lÃ­n'animous hiss. - Gov. J. eviilentlv lost his temper, as hc became conscious of the repugnance of the auditory to his views ; and Gen. Coombs so far forgot himself as to indulge in many heorty oaths, and to turn around and adress a poition of the disturbÃ©is as "you vile cures!" It is hard work to look one wny and row another," in nolilical mattera - and these