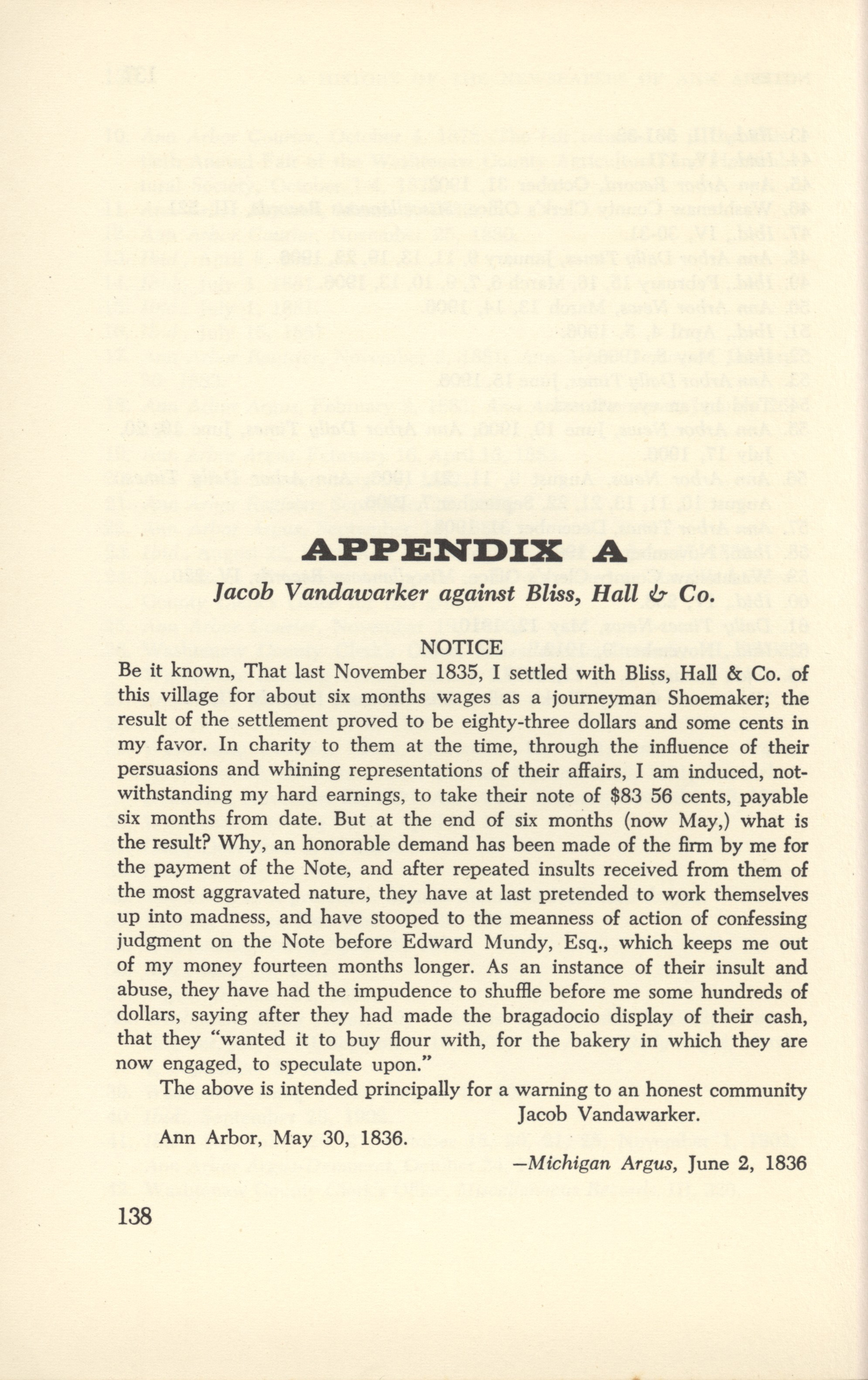 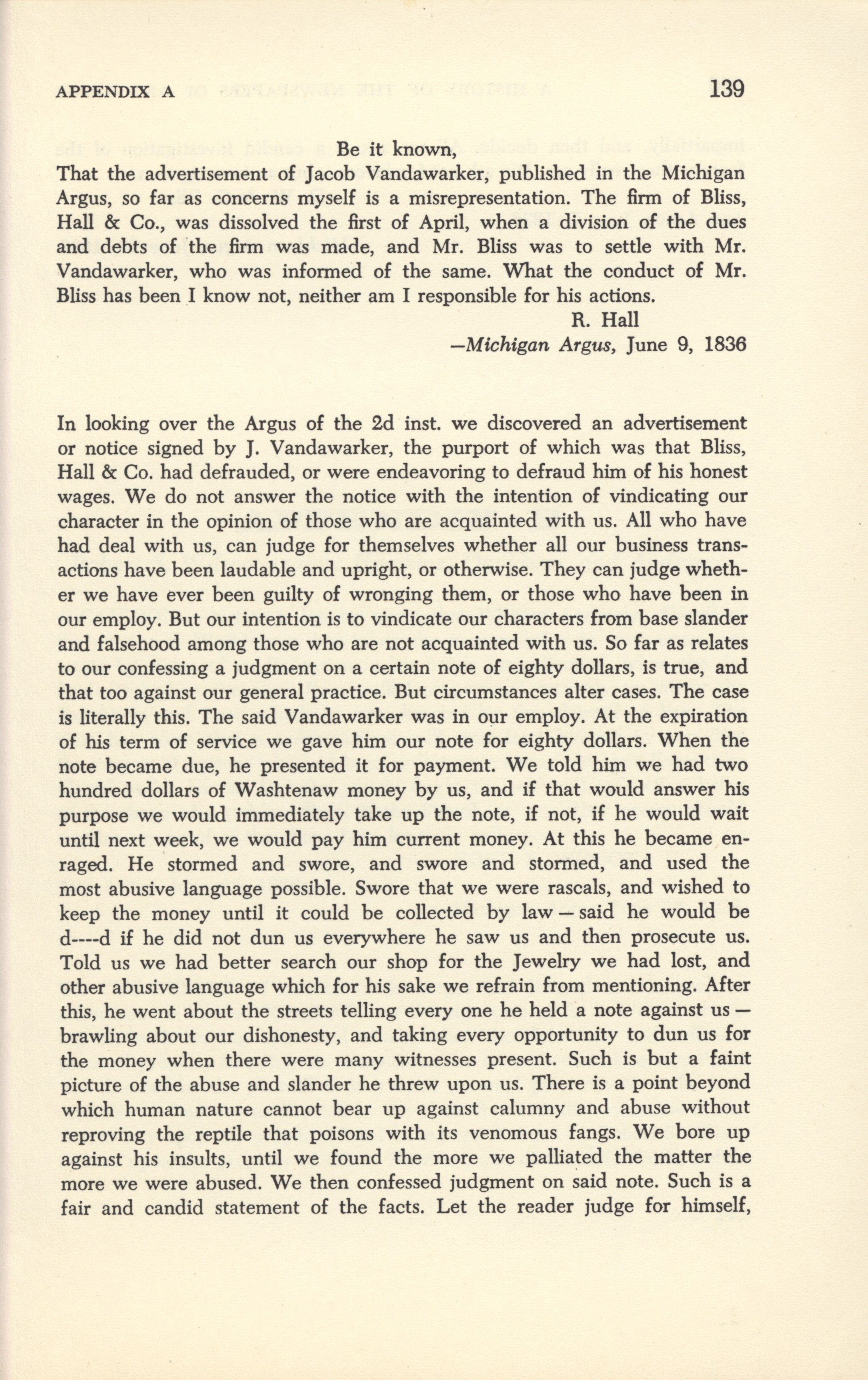 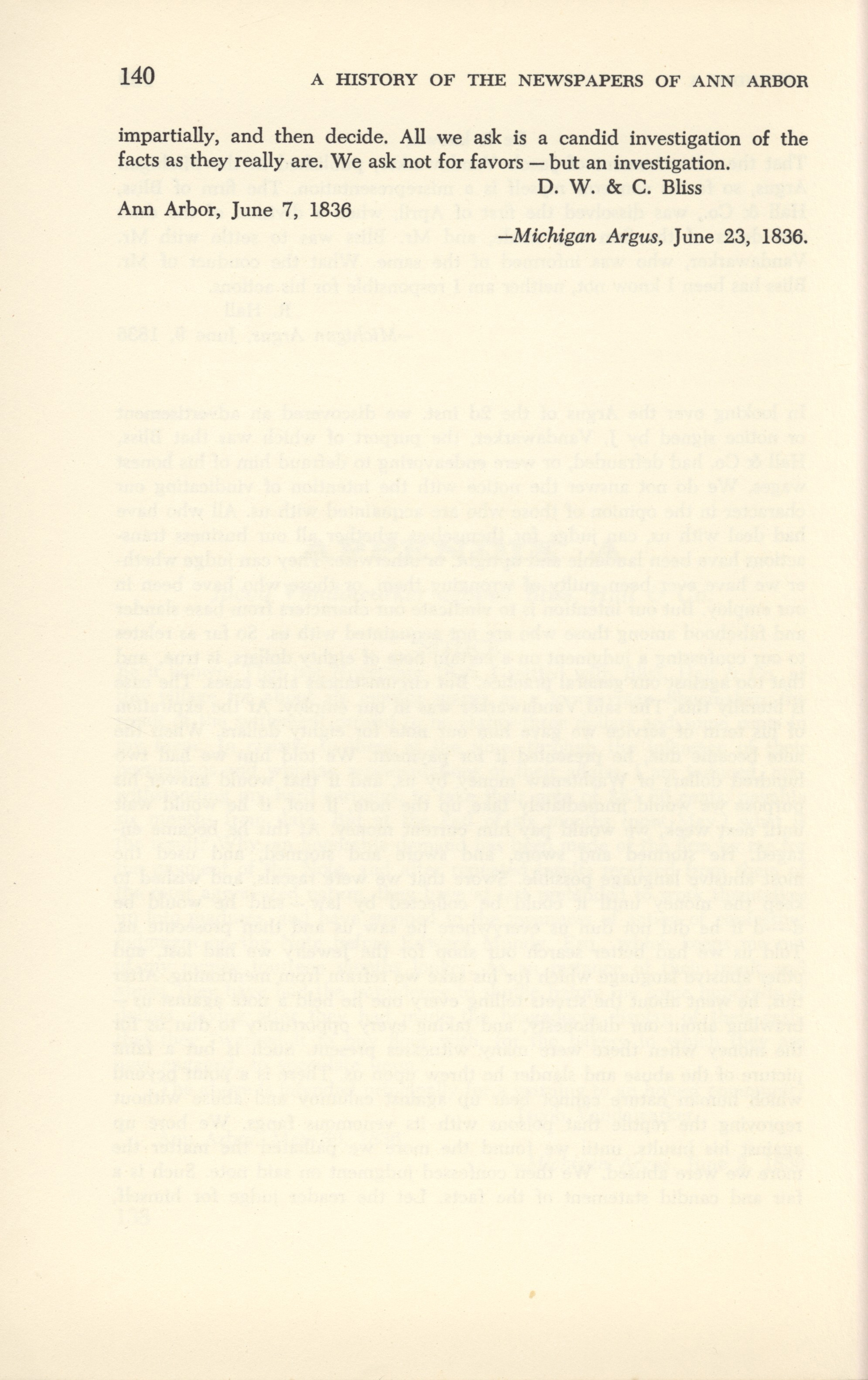 NOTICE
Be it known, That last November 1835, I settled with Bliss, Hall & Co. of this village for about six months wages as a journeyman Shoemaker; the result of the settlement proved to be eighty-three dollars and some cents in my favor. In charity to them at the time, through the influence of their persuasions and whining representations of their affairs, I am induced, notwithstanding my hard earnings, to take their note of $83 56 cents, payable six months from date. But at the end of six months (now May,) what is the result? Why, an honorable demand has been made of the firm by me for the payment of the Note, and after repeated insults received from them of the most aggravated nature, they have at last pretended to work themselves up into madness, and have stooped to the meanness of action of confessing judgment on the Note before Edward Mundy, Esq., which keeps me out of my money fourteen months longer. As an instance of their insult and abuse, they have had the impudence to shuffle before me some hundreds of dollars, saying after they had made the bragadocio display of their cash, that they "wanted it to buy flour with, for the bakery in which they are now engaged, to speculate upon."
The above is intended principally for a warning to an honest community
Jacob Vandawarker.
Ann Arbor, May 30, 1836.
-Michigan Argus, June 2, 1836

Be it known,
That the advertisement of Jacob Vandawarker, published in the Michigan Argus, so far as concerns myself is a misrepresentation. The firm of Bliss, Hall & Co., was dissolved the first of April, when a division of the dues and debts of the firm was made, and Mr. Bliss was to settle with Mr. Vandawarker, who was informed of the same. What the conduct of Mr. Bliss has been I know not, neither am I responsible for his actions.
R. Hall
-Michigan Argus, June 9, 1836

In looking over the Argus of the 2d inst. we discovered an advertisement or notice signed by J. Vandawarker, the purport of which was that Bliss, Hall & Co. had defrauded, or were endeavoring to defraud him of his honest wages. We do not answer the notice with the intention of vindicating our character in the opinion of those who are acquainted with us. All who have had deal with us, can judge for themselves whether all our business transactions have been laudable and upright, or otherwise. They can judge whether we have ever been guilty of wronging them, or those who have been in our employ. But our intention is to vindicate our characters from base slander and falsehood among those who are not acquainted with us. So far as relates to our confessing a judgment on a certain note of eighty dollars, is true, and that too against our general practice. But circumstances alter cases. The case is literally this. The said Vandawarker was in our employ. At the expiration of his term of service we gave him our note for eighty dollars. When the note became due, he presented it for payment. We told him we had two hundred dollars of Washtenaw money by us, and if that would answer his purpose we would immediately take up the note, if not, if he would wait until next week, we would pay him current money. At this he became enraged. He stormed and swore, and swore and stormed, and used the most abusive language possible. Swore that we were rascals, and wished to keep the money until it could be collected by law -said he would be d----d if he did not dun us everywhere he saw US and then prosecute us. Told us we had better search our shop for the Jewelry we had lost, and other abusive language which for his sake we refrain from mentioning. After this, he went about the streets telling everyone he held a note against us brawling about our dishonesty, and taking every opportunity to dun us for the money when there were many witnesses present. Such is but a faint picture of the abuse and slander he threw upon us. There is a point beyond which human nature cannot bear up against calumny and abuse without reproving the reptile that poisons with its venomous fangs. We bore up against his insults, until we found the more we palliated the matter the more we were abused. We then confessed judgment on said note. Such is a fair and candid statement of the facts. Let the reader judge for himself, impartially, and then decide. All we ask is a candid investigation of the facts as they really are. We ask not for favors -but an investigation.
D. W. & C. Bliss
Ann Arbor, June 7, 1836
-Michigan Argus, June 23, 1836.