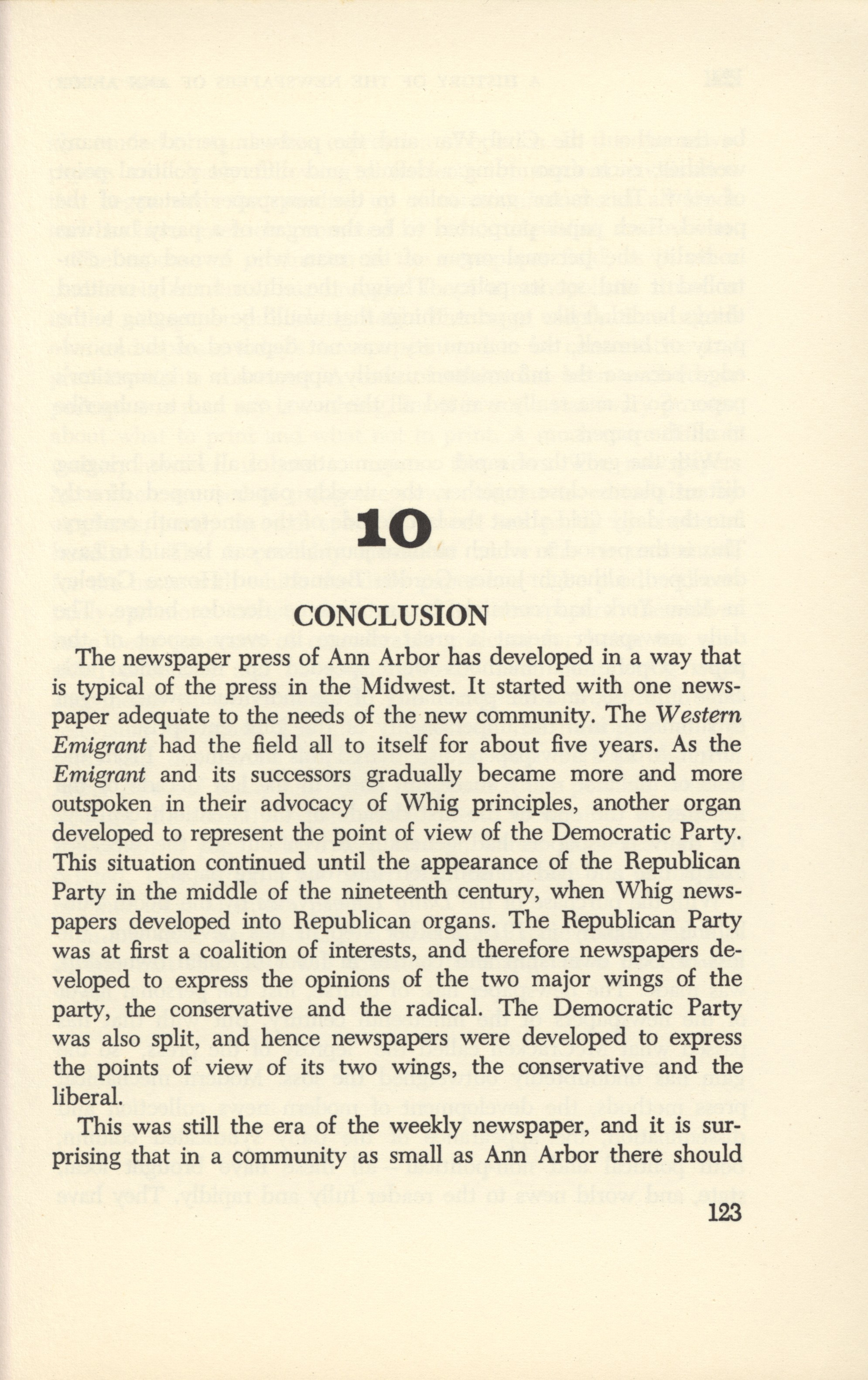 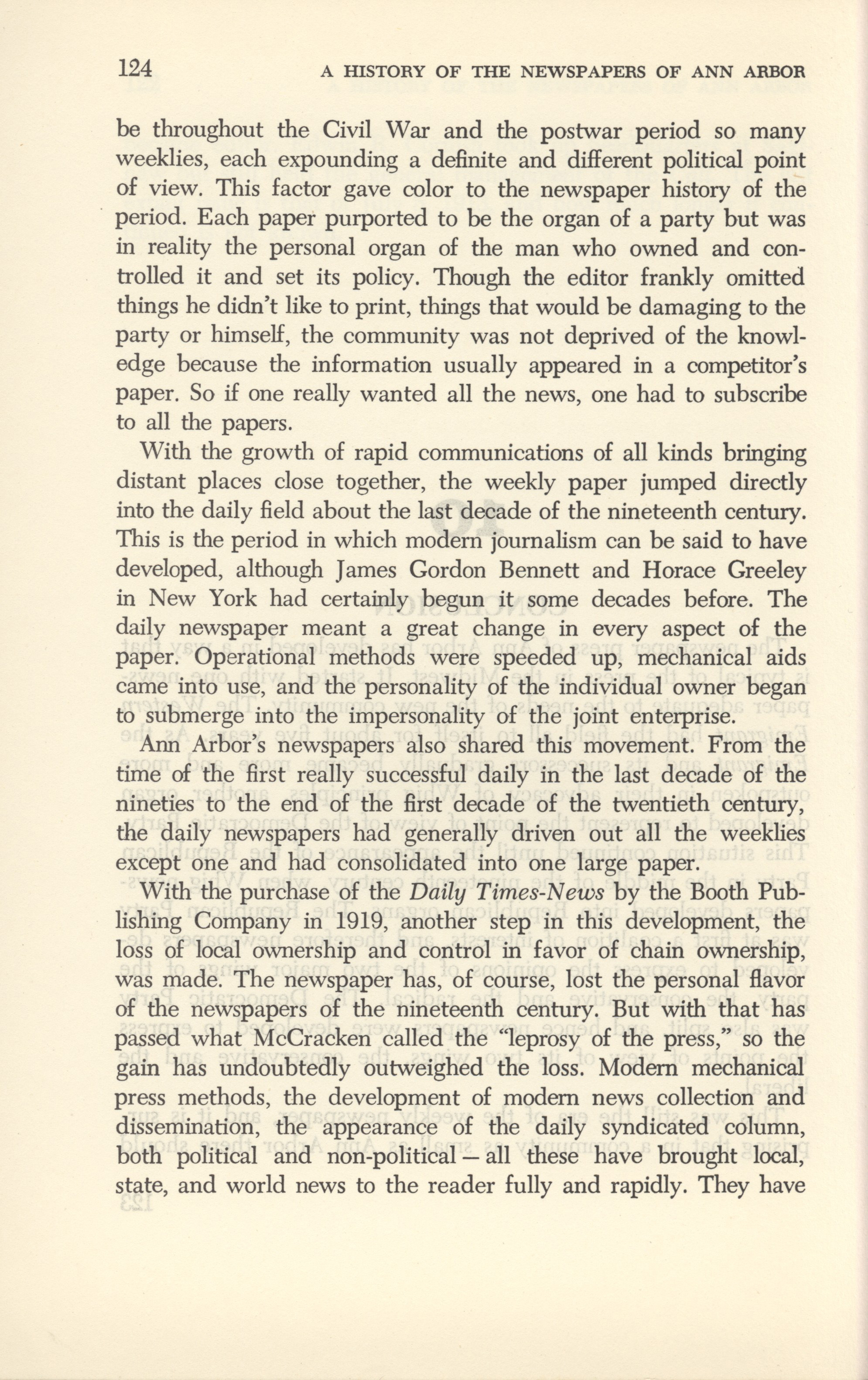 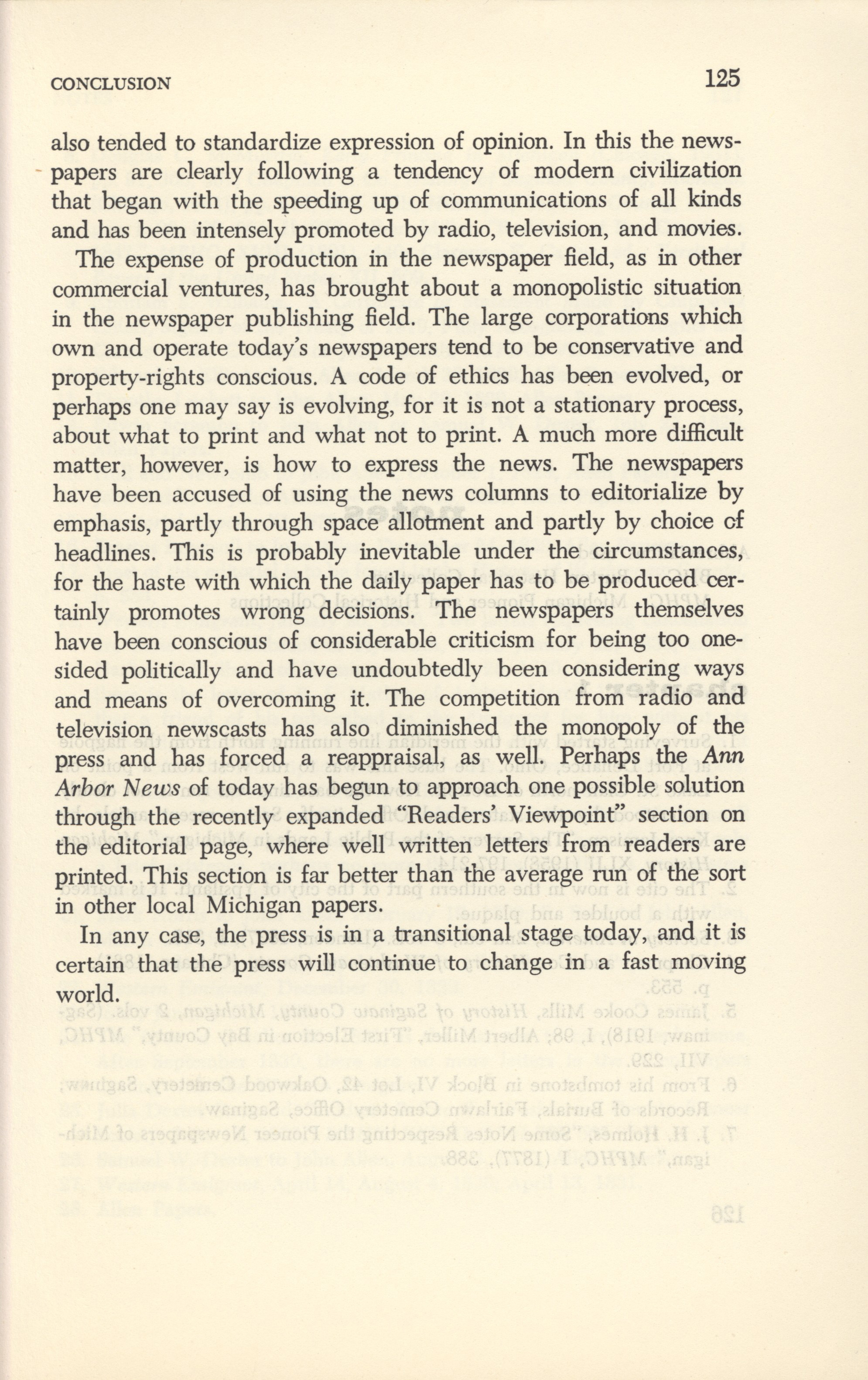 The newspaper press of Ann Arbor has developed in a way that is typical of the press in the Midwest. It started with one newspaper adequate to the needs of the new community. The Western Emigrant had the field all to itself for about five years. As the Emigrant and its successors gradually became more and more outspoken in their advocacy of Whig principles, another organ developed to represent the point of view of the Democratic Party. This situation continued until the appearance of the Republican Party in the middle of the nineteenth century, when Whig newspapers developed into Republican organs. The Republican Party was at first a coalition of interests, and therefore newspapers developed to express the opinions of the two major wings of the party, the conservative and the radical. The Democratic Party was also split, and hence newspapers were developed to express the points of view of its two wings, the conservative and the liberal.

This was still the era of the weekly newspaper, and it is surprising that in a community as small as Ann Arbor there should be throughout the Civil War and the postwar period so many weeklies, each expounding a definite and different political point of view. This factor gave color to the newspaper history of the period. Each paper purported to be the organ of a party but was in reality the personal organ of the man who owned and controlled it and set its policy. Though the editor frankly omitted things he didn't like to print, things that would be damaging to the party or himself, the community was not deprived of the knowledge because the information usually appeared in a competitor's paper. So if one really wanted all the news, one had to subscribe to all the papers.

With the growth of rapid communications of all kinds bringing distant places close together, the weekly paper jumped directly into the daily field about the last decade of the nineteenth century. This is the period in which modern journalism can be said to have developed, although James Gordon Bennett and Horace Greeley in New York had certainly begun it some decades before. The daily newspaper meant a great change in every aspect of the paper. Operational methods were speeded up, mechanical aids came into use, and the personality of the individual owner began to submerge into the impersonality of the joint enterprise.

With the purchase of the Daily Times-News by the Booth Publishing Company in 1919, another step in this development, the loss of local ownership and control in favor of chain ownership, was made. The newspaper has, of course, lost the personal flavor of the newspapers of the nineteenth century. But with that has passed what McCracken called the "leprosy of the press," so the gain has undoubtedly outweighed the loss. Modern mechanical press methods, the development of modern news collection and dissemination, the appearance of the daily syndicated column, both political and non-political - all these have brought local, state, and world news to the reader fully and rapidly. They have also tended to standardize expression of opinion. In this the newspapers are clearly following a tendency of modern civilization that began with the speeding up of communications of all kinds and has been intensely' promoted by radio, television, and movies.

The expense of production in the newspaper field, as in other commercial ventures, has brought about a monopolistic situation in the newspaper publishing field. The large corporations which own and operate today's newspapers tend to be conservative and property-rights conscious. A code of ethics has been evolved, or perhaps one may say is evolving, for it is not a stationary process, about what to print and what not to print. A much more difficult matter, however, is how to express the news. The newspapers have been accused of using the news columns to editorialize by emphasis, partly through space allotment and partly by choice of headlines. This is probably inevitable under the circumstances, for the haste with which the daily paper has to be produced certainly promotes wrong decisions. The newspapers themselves have been conscious of considerable criticism for being too onesided politically and have undoubtedly been considering ways and means of overcoming it. The competition from radio and television newscasts has also diminished the monopoly of the press and has forced a reappraisal, as well. Perhaps the Ann Arbor News of today has begun to approach one possible solution through the recently expanded "Readers' Viewpoint" section on the editorial page, where well written letters from readers are printed. This section is far better than the average run of the sort in other local Michigan papers.

In any case, the press is in a transitional stage today, and it is certain that the press will continue to change in a fast moving world.