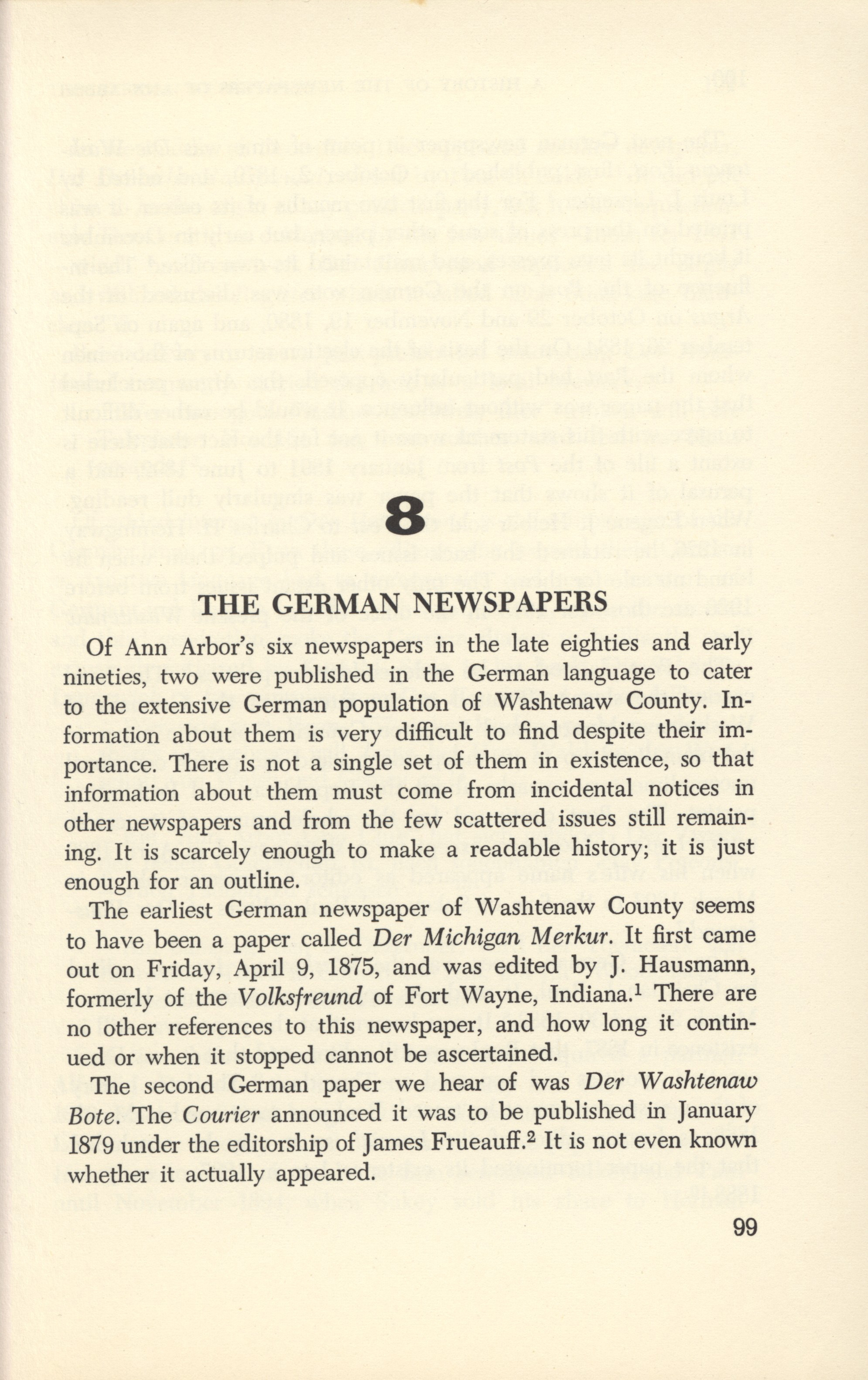 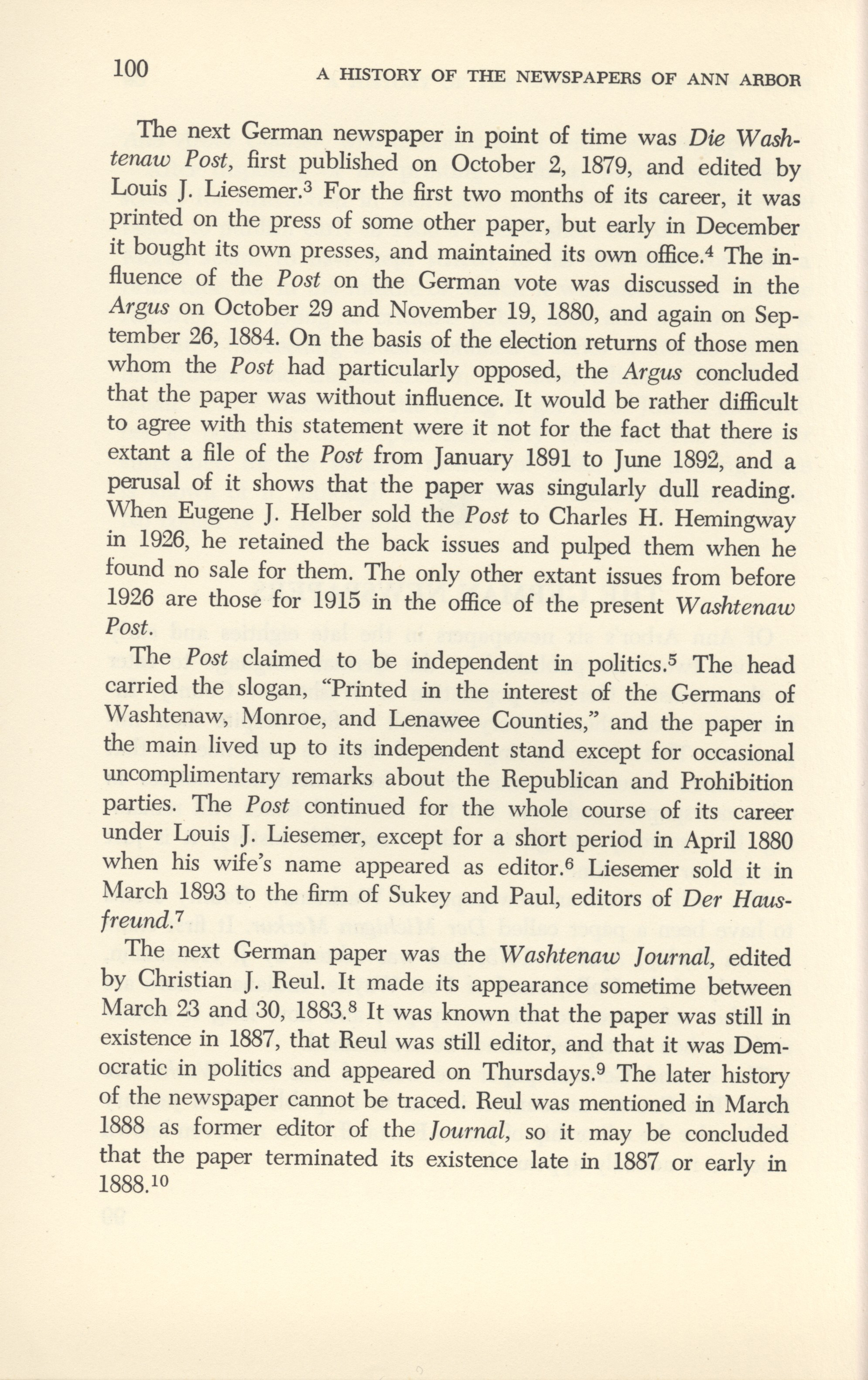 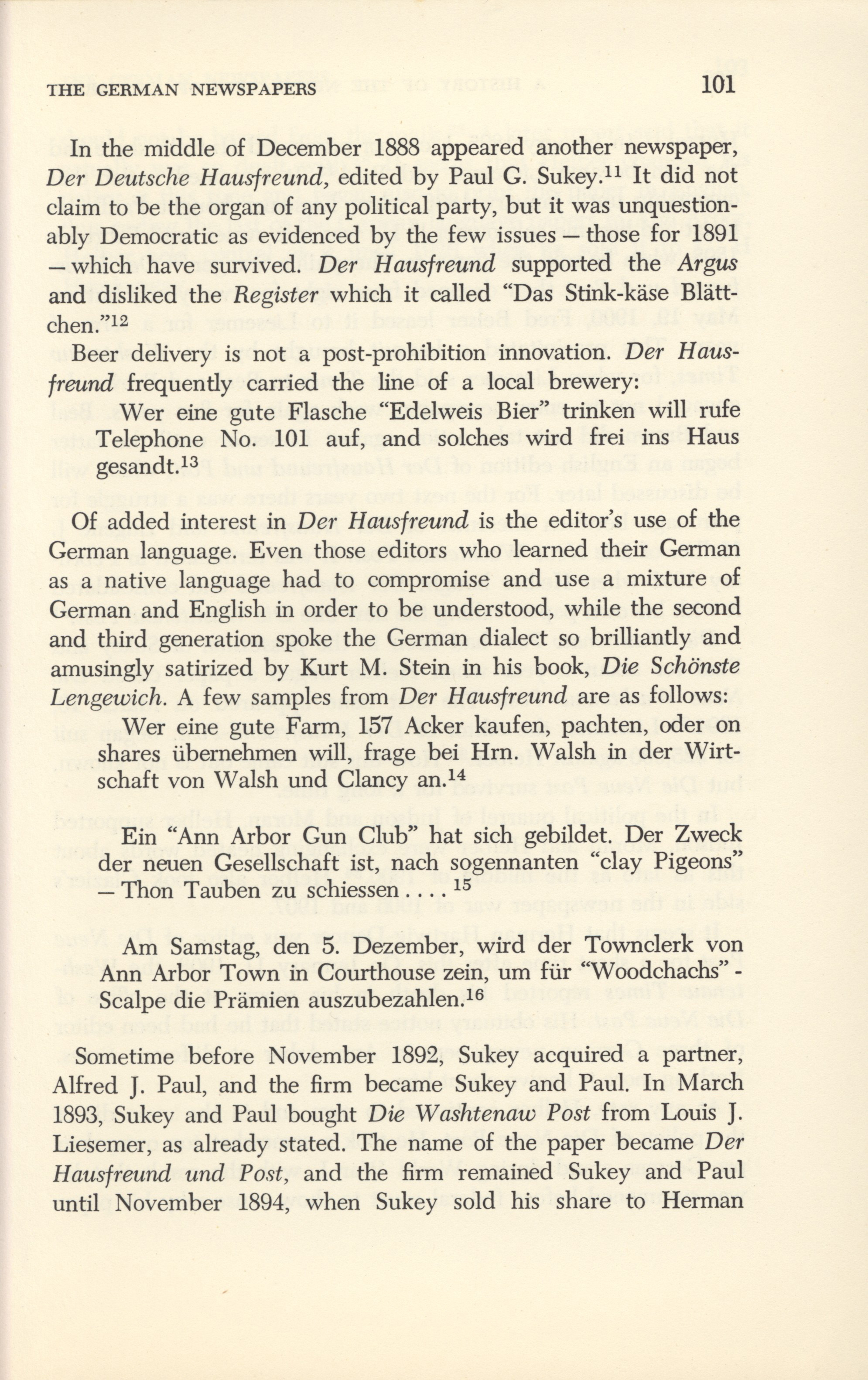 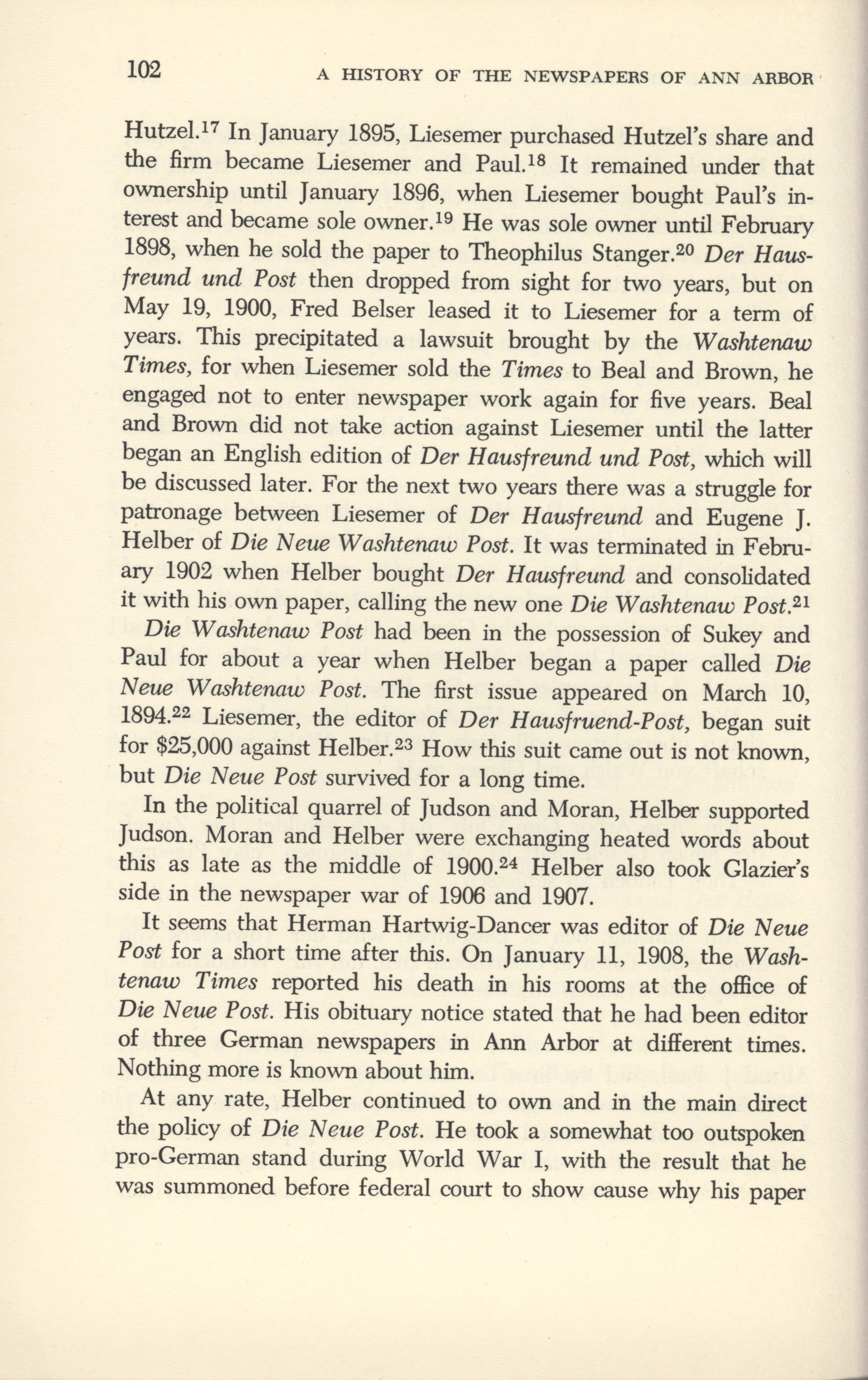 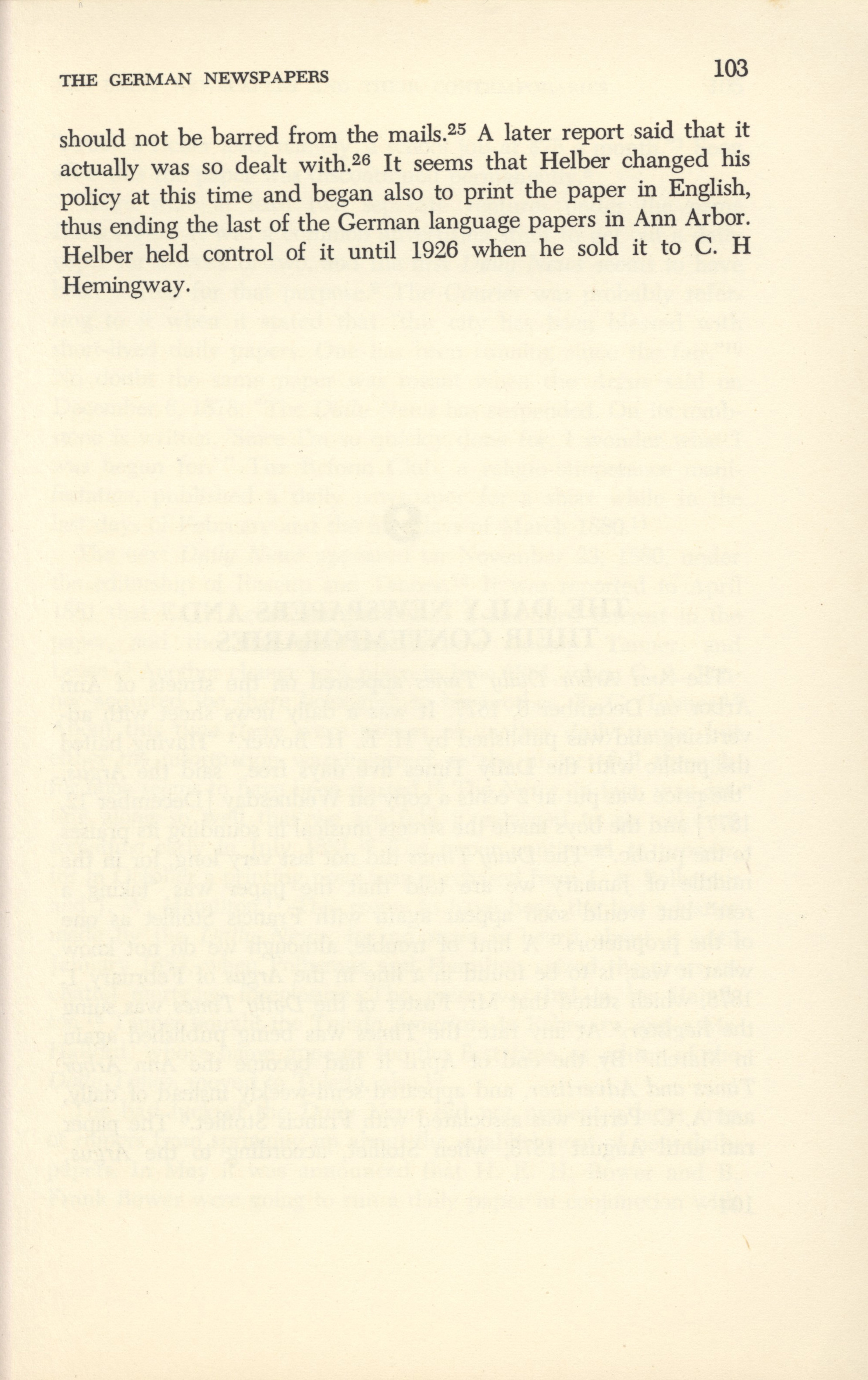 Of Ann Arbor's six newspapers in the late eighties and early nineties, two were published in the German language to cater to the extensive German population of Washtenaw County. Information about them is very difficult to find despite their importance. There is not a single set of them in existence, so that information about them must come from incidental notices in other newspapers and from the few scattered issues still remaining. It is scarcely enough to make a readable history; it is just enough for an outline.

The earliest German newspaper of Washtenaw County seems to have been a paper called Der Michigan Merkur. It first came out on Friday, April 9, 1875, and was edited by J. Hausmann, formerly of the Volksfreund of Fort Wayne, Indiana. 1 There are no other references to this newspaper, and how long it continued or when it stopped cannot be ascertained.

The second German paper we hear of was Der Washtenaw Bote. The Courier announced it was to be published in January 1879 under the editorship of James Frueauff. 2 It is not even known whether it actually appeared.

The next German newspaper in point of time was Die Washtenaw Post, first published on October 2, 1879, and edited by Louis J. Liesemer. 3 For the first two months of its career, it was printed on the press of some other paper, but early in December it bought its own presses, and maintained its own office. 4 The influence of the Post on the German vote was discussed in the Argus on October 29 and November 19, 1880, and again on September 26, 1884. On the basis of the election returns of those men whom the Post had particularly opposed, the Argus concluded that the paper was without influence. It would be rather difficult to agree with this statement were it not for the fact that there is extant a file of the Post from January 1891 to June 1892, and a perusal of it shows that the paper was singularly dull reading. When Eugene J. Helber sold the Post to Charles H. Hemingway in 1926, he retained the back issues and pulped them when he found no sale for them. The only other extant issues from before 1926 are those for 1915 in the office of the present Washtenaw Post.

The Post claimed to be independent in politics. 5 The head carried the slogan, "Printed in the interest of the Germans of Washtenaw, Monroe, and Lenawee Counties," and the paper in the main lived up to its independent stand except for occasional uncomplimentary remarks about the Republican and Prohibition parties. The Post continued for the whole course of its career under Louis J. Liesemer, except for a short period in April 1880 when his wife's name appeared as editor. 6 Liesemer sold it in March 1893 to the firm of Sukey and Paul, editors of Der Hausfreund. 7

The next German paper was the Washtenaw Journal, edited by Christian J. Reul. It made its appearance sometime between March 23 and 30, 1883. 8 It was known that the paper was still in existence in 1887, that Reul was still editor, and that it was Democratic in politics and appeared on Thursdays. 9 The later history of the newspaper cannot be traced. Reul was mentioned in March 1888 as former editor of the Journal, so it may be concluded that the paper terminated its existence late in 1887 or early in 1888. 10

In the middle of December 1888 appeared another newspaper, Der Deutsche Hausfreund, edited by Paul G. Sukey. 11 It did not claim to be the organ of any political party, but it was unquestionably Democratic as evidenced by the few issues - those for 1891 - which have survived. Der Hausfreund supported the Argus and disliked the Register which it called "Das Stink-kÃ¤se BlÃ¤ttchen." 12

Of added interest in Der Hausfreund is the editor's use of the German language. Even those editors who learned their German as a native language had to compromise and use a mixture of German and English in order to be understood, while the second and third generation spoke the German dialect so brilliantly and amusingly satirized by Kurt M. Stein in his book, Die Schonste Lengewich. A few samples from Der Hausfreund are as follows:
Wer eine gute Farm, 157 Acker kaufen, pachten, oder on shares ubernehmen will, frage bei Hrn. Walsh in der Wirtschaft von Walsh und Clancy an.14

Sometime before November 1892, Sukey acquired a partner, Alfred J. Paul, and the firm became Sukey and Paul. In March 1893, Sukey and Paul bought Die Washtenaw Post from Louis J. Liesemer, as already stated. The name of the paper became Der Hausfreund und Post, and the firm remained Sukey and Paul until November 1894, when Sukey sold his share to Herman Hutzel. 17 In January 1895, Liesemer purchased Hutzel's share and the firm became Liesemer and Paul. 18 It remained under that ownership until January 1896, when Liesemer bought Paul's interest and became sole owner. 19 He was sole owner until February 1898, when he sold the paper to Theophilus Stanger. 20 Der Hausfreund und Post then dropped from sight for two years, but on May 19, 1900, Fred Belser leased it to Liesemer for a term of years. This precipitated a lawsuit brought by the Washtenaw Times, for when Liesemer sold the Times to Beal and Brown, he engaged not to enter newspaper work again for five years. Beal and Brown did not take action against Liesemer until the latter began an English edition of Der Hausfreund und Post, which will be discussed later. For the next two years there was a struggle for patronage between Liesemer of Der Hausfreund and Eugene J. Helber of Die Neue Washtenaw Post. It was terminated in February 1902 when Helber bought Der Hausfreund and consolidated it with his own paper, calling the new one Die Washtenaw Post. 21

Die Washtenaw Post had been in the possession of Sukey and Paul for about a year when Helber began a paper called Die Neue Washtenaw Post. The first issue appeared on March 10, 1894. 22 Liesemer, the editor of Der Hausfruend-Post, began suit for $25,000 against Helber. 23 How this suit came out is not known, but Die Neue Post survived for a long time.

In the political quarrel of Judson and Moran, Helber supported Judson. Moran and Helber were exchanging heated words about this as late as the middle of 1900. 24 Helber also took Glazier's side in the newspaper war of 1906 and 1907.

It seems that Herman Hartwig-Dancer was editor of Die Neue Post for a short time after this. On January 11, 1908, the Washtenaw Times reported his death in his rooms at the office of Die Neue Post. His obituary notice stated that he had been editor of three German newspapers in Ann Arbor at different times. Nothing more is known about him.

At any rate, Helber continued to own and in the main direct the policy of Die Neue Post. He took a somewhat too outspoken pro-German stand during World War I, with the result that he was summoned before federal court to show cause why his paper should not be barred from the mails. 25 A later report said that it actually was so dealt with. 26 It seems that Helber changed his policy at this time and began also to print the paper in English, thus ending the last of the German language papers in Ann Arbor. Helber held control of it until 1926 when he sold it to C. H. Hemingway.