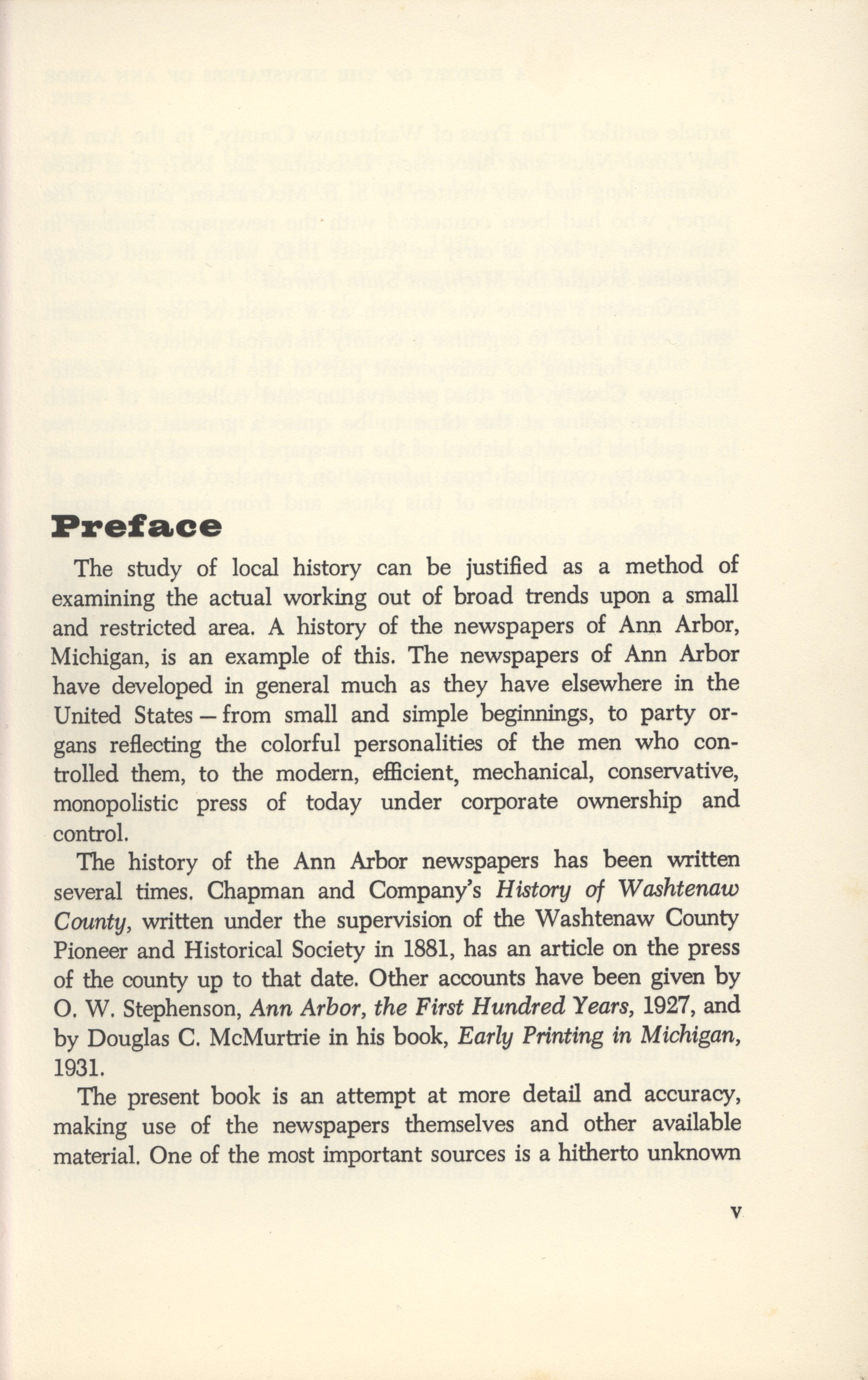 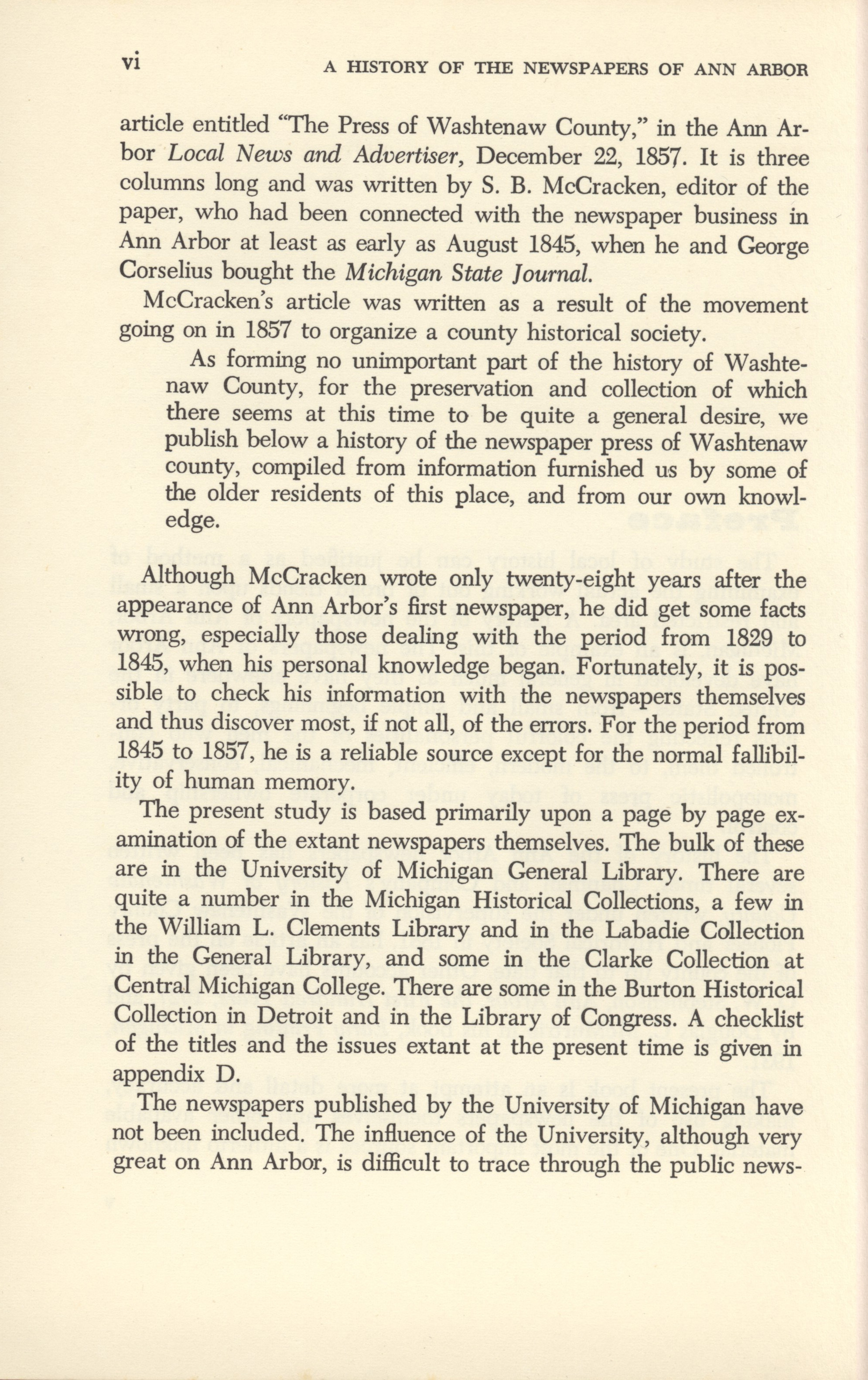 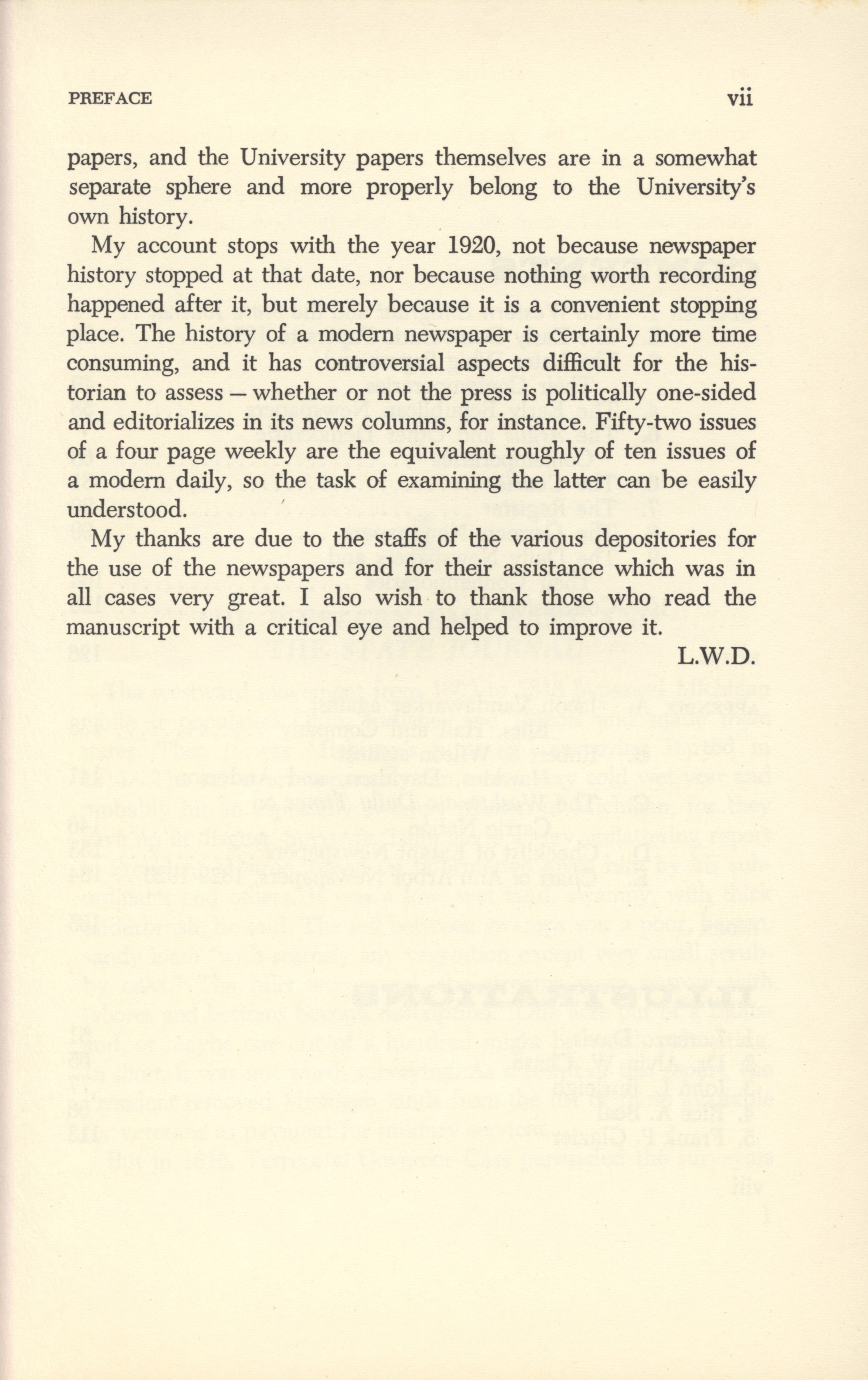 The study of local history can be justified as a method of examining the actual working out of broad trends upon a small and restricted area. A history of the newspapers of Ann Arbor, Michigan, is an example of this. The newspapers of Ann Arbor have developed in general much as they have elsewhere in the United States -from small and simple beginnings, to party organs reflecting the colorful personalities of the men who controlled them, to the modern, efficient, mechanical, conservative, monopolistic press of today under corporate ownership and control.

The history of the Ann Arbor newspapers has been written several times. Chapman and Company's History of Washtenaw County, written under the supervision of the Washtenaw County Pioneer and Historical Society in 1881, has an article on the press of the county up to that date. Other accounts have been given by O. W. Stephenson, Ann Arbor, the First Hundred Years, 1927, and by Douglas C. McMurtrie in his book, Early Printing in Michigan, 1931.

The present book is an attempt at more detail and accuracy, making use of the newspapers themselves and other available material. One of the most important sources is a hitherto unknown article entitled "The Press of Washtenaw County," in the Ann Arbor Local News and Advertiser, December 22, 1857. It is three columns long and was written by S. B. McCracken, editor of the paper, who had been connected with the newspaper business in Ann Arbor at least as early as August 1845, when he and George Corselius bought the Michigan State Journal.

McCracken's article was written as a result of the movement going on in 1857 to organize a county historical society.
As forming no unimportant part of the history of Washtenaw County, for the preservation and collection of which there seems at this time to be quite a general desire, we publish below a history of the newspaper press of Washtenaw county, compiled from information furnished us by some of the older residents of this place, and from our own knowledge.

Although McCracken wrote only twenty-eight years after the appearance of Ann Arbor's first newspaper, he did get some facts wrong, especially those dealing with the period from 1829 to 1845, when his personal knowledge began. Fortunately, it is possible to check his information with the newspapers themselves and thus discover most, if not all, of the errors. For the period from 1845 to 1857, he is a reliable source except for the normal fallibility of human memory.

The present study is based primarily upon a page by page examination of the extant newspapers themselves. The bulk of these are in the University of Michigan General Library. There are quite a number in the Michigan Historical Collections, a few in the William L. Clements Library and in the Labadie Collection in the General Library, and some in the Clarke Collection at Central Michigan College. There are some in the Burton Historical Collection in Detroit and in the Library of Congress. A checklist of the titles and the issues extant at the present time is given in appendix D.

The newspapers published by the University of Michigan have not been included. The influence of the University, although very great on Ann Arbor, is difficult to trace through the public newspapers, and the University papers themselves are in a somewhat separate sphere and more properly belong to the University's own history.

My account stops with the year 1920, not because newspaper history stopped at that date, nor because nothing worth recording happened after it, but merely because it is a convenient stopping place. The history of a modem newspaper is certainly more time consuming, and it has controversial aspects difficult for the historian to assess -whether or not the press is politically one-sided and editorializes in its news columns, for instance. Fifty-two issues of a four page weekly are the equivalent roughly of ten issues of a modem daily, so the task of examining the latter can be easily understood.

My thanks are due to the staffs of the various depositories for the use of the newspapers and for their assistance which was in all cases very great. I also wish to thank those who read the manuscript with a critical eye and helped to improve it.