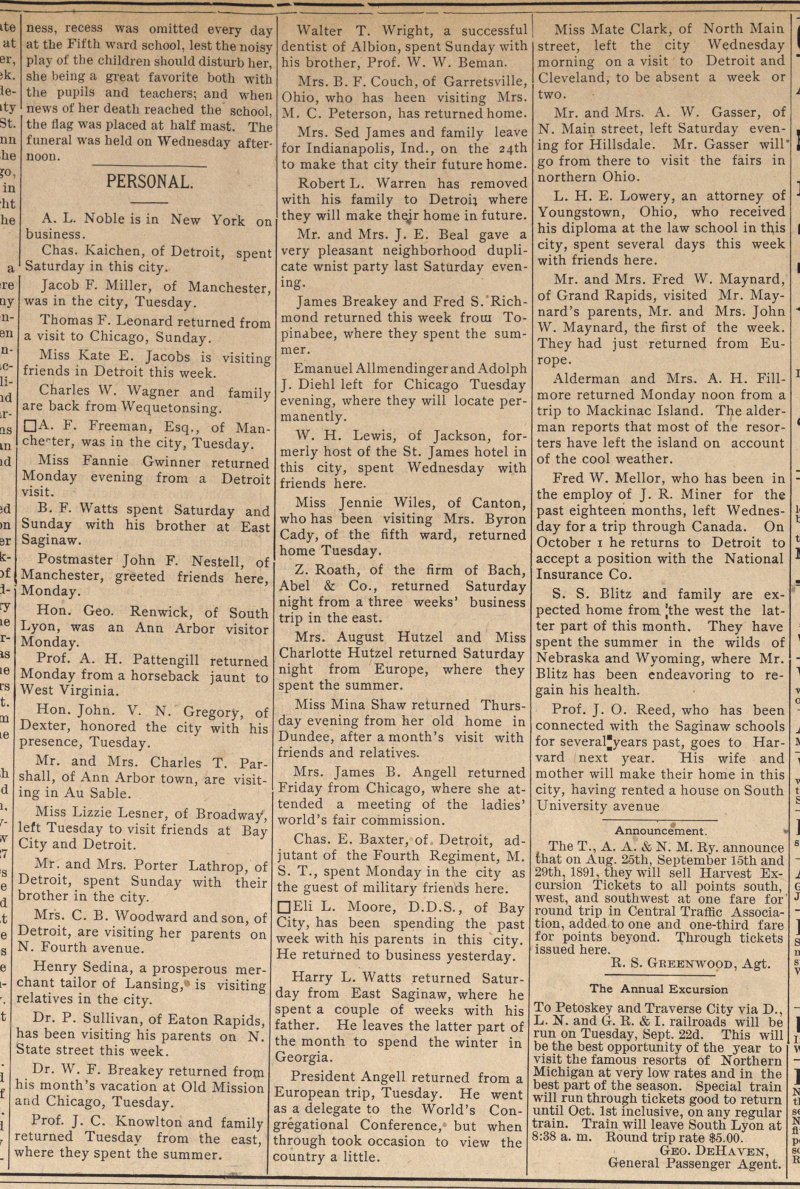 A. L. Noble is in New York on business. Chas. Kaichen, of Detroit, spent Saturday in this city. Jacob F. Miller, of Manchester, was in the city, Tuesday. Thomas F. Leonard returned from a visit to Chicago, Sunday. Miss Kate E. Jacobs is visiting friends in Detroit this week. Charles W. Wagner and family are back from Wequetonsing. DA. F. Freeman, Esq., of Manche-ter, was in the city, Tuesday. Miss Fannie Gwinner returned Monday evening from a Detroit visit. B. F. Watts spent Saturday and Sunday with his brother at East Saginaw. Postmaster John F. Nestell, of Manchester, greeted friends here, Monday. Hon. Geo. Renwick, of South Lyon, was an Ann Arbor visitor Monday. Prof. A. H. Pattengill returned Monday from a horseback jaunt to West Virginia. Hon. John. V. N. Gregory, of Dexter, honored the city with his presence, Tuesday. Mr. and Mrs. Charles T. Parshall, of Ann Arbor town, are visiting in Au Sable. Miss Lizzie Lesner, of Broadway', left Tuesday to visit friends at Bay City and Detroit. Mr. and Mrs. Porter Lathrop, of Detroit, spent Sunday with their brother in the city. Mrs. C. B. Woodward and son, of Detroit, are visiting her parents on N. Fourth avenue. Henry Sedina, a prosperous merchant tailor of Lansing," is visiting relatives in the city. Dr. P. Sullivan, of Eaton Rapids, has been visiting his parents on N. State street this week. Dr. W. F. Breakey returned frorn his month's vacation at Old Mission and Chicago, Tuesday. Prof. J. C. Knowlton and family returned Tuesday from the east, where they spent the summer. Waker T. Wright, a successful dentist of Albion, spent Sunday with his brother, Prof. W. W. Beman. Mrs. B. F. Couch, of Garretsville, Ohio, who has heen visiting Mrs. M. C. Peterson, has returned home. Mrs. Sed James and family leave for Indianapolis, Ind., on the 24Ü1 to make that city their future home. Robert L. Warren has removed with his family to Detroi; where they will make thejr home in future. Mr. and Mrs. J. E. Beal gave a very pleasant neighborhood duplícate wnist party last Saturday evening. James Breakey and Fred S. Richmond returned this week froui Topinabee, where they spent the summer. Emanuel Allmendingerand Adolph J. Diehl left for Chicago Tuesday evening, where they will lócate permanently. W. H. Lewis, of Jackson, formerly host of the St. James hotel in this city, spent Wednesday with friends here. Miss Jennie Wiles, of Cantón, who has been visiting Mrs. Byron Cady, of the fifth ward, returned home Tuesday. Z. Roath, of the firm of Bach, Abel & Co., returned Saturday night from a three weeks' business trip in the east. Mrs. August Hutzel and Miss Charlotte Hutzel returned Saturday night from Europe, where they spent the summer. Miss Mina Shaw returned Thursday evening from her old home in Dundee, after a month's visit with friends and relatives. Mrs. James B. Angelí returned Friday from Chicago, where she attended a meeting of the ladies' world's fair commission. Chas. E. Baxter, of Detroit, adjutant of the Fourth Regiment, M. S. T., spent Monday in the city as the guest of military friends here. qEli L. Moore, D.D.S., of Bay City, has been spending the past week with his parents in this city. He returned to business yesterday. Harry L. Watts returned Saturday from East Saginaw, where he spent a couple of weeks with his father. He leaves the latter part of the month to spend the winter in Georgia. President Angelí returned from a European trip, Tuesday. He went is a delégate to the World's Con'régational Conference, but when :hrough took occasion to view the :ountry a little. Miss Mate Clark, of North Main street, left the city Wednesday morning on a visit to Detroit and Cleveland, to be absent a week or two. Mr. and Mrs. A. W. Gasser, of N. Main street, left Saturday evening for Hillsdale. Mr. Gasser will" go from there to visit the fairs in northern Ohio. L. H. E. Lowery, an attorney of Youngstown, Ohio, who received his diploma at the law school in this city, spent several days this week with friends here. Mr. and Mrs. Fred W. Maynard, of Grand Rapids, visited Mr. Maynard's parents, Mr. and Mrs. John W. Maynard, the first of the week. They had just returned from Europe. Alderman and Mrs. A. H. Fillmore returned Monday noon from a trip to Mackinac Island. The alderman reports that most of the resorters have left the island on account of the cool weather. Fred W. Mellor, who has been in the employ of J. R. Miner for the past eighteen months, left Wednesday for a trip through Canada. On October i he returns to Detroit to accept a position with the National Insurance Co. S. S. Blitz and family are expected home from the west the latter part of this month. They have spent the summer in the wilds of Nebraska and Wyoming, where Mr. Blitz has been endeavoring to regain his health. Prof. J. O. Reed, who has been connected with the Saginaw schools for several'years past, goes to Harvard next year. His wife and mother will make their home in this city, having rented a house on South University avenue