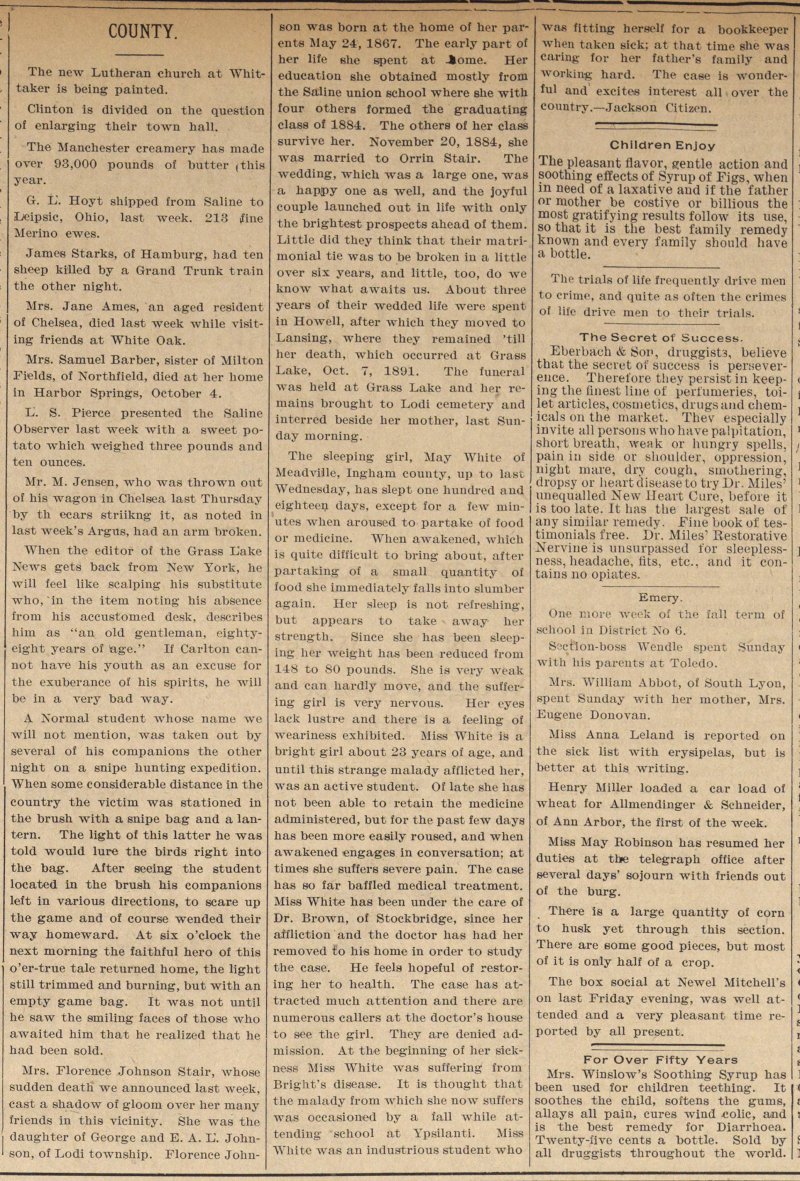 The new Lutheran chureh at WMttaker is being painted. Clinton is divided on the question of enlarging their town hall. The Manchester creamery has made over 93,000 pounds of Initter ,this year. G. L'. Hoyt shipped from Saline to Jjeipsic, Ohio, last week. 213 fine Merino ewes. James Starks, of Hamburg, had ten sheep killed by a Grand Trunk train the other night. Mrs. Jane Ames, an aged resident of Chelsea, died last week while visiting friends at White Oak. Mrs. Samuel Barber, sister of Milton Fields, of Northfield, died at her home in Harbor Springs, October 4. L S. Pierce presented the Saline Obserrer last week with a sweet potato whieh weighed three pounds and ten ounces. Mr. M. Jensen, who was thrown out of his wagon in Chelsea last Thursday by th ecars striikng it, as noted in last week's Argus, had an arm brokcn. When the editor of the Grass Uake News gets back from New York, he will feel like scalping his substitute who, 'in the item noting his absence from his accustomed desk, describes him as "an old gentleman, eightyeight years of age." If Carlton cannot have his youth as an excuse for the exuberance of his spirits, he will be in a very bad way. A Normal student whose name we will not mention, was taken out by several of his companions the other night on a snipe hunting expedition. When some considerable distance in the country the victim was stationed in the brush with a snipe bag and a lantern. The light of this latter he was told would lure the birds right into the bag. After seeing the student located in the brush his companions left in various directions, to scare up the game and of course wended their way homeward. At six o'clock the next morning the faithful nero of this o'er-true tale returned home, the light still trimmed and burning, but with an empty game bag. It was not until he saw the emiling faces of those who awaited him that he realized that he had been sold. Mrs. Florence Johnson Stair, whose sudden death we announced last week, cast a shadow of gloom over her niany friends in this vicinity. She was the daughter of George and E. A. L Johnson, of Lodi township. Florence son was bom at the home of her parents May 24, 1867. The early part of her life she spent at -ome. Her educatiou ghe obtained mostly from the Saline union school where she with four others iormed the graduating class of 1884. The others of her class survive her. November 20, 1884, she was married to Orrin Stair. The wedding, which was a large one, was a happy one as well, and the joyful couple launched out in life with only the brightest prospects ahead of them. Little did they think that their matrimonial tie was to be broken in a little over six years, and little, too, do we know what awaits us. About three years of their wedded life were speni in Howell, after which they moved to Lansing, where they remained 'till her death, which occurred at Grass Lake, Oct. T, 1891. The funeral was held at Grass Lake and remains brought to Lodi cemetery and Interréd beside her mother, last Sunday morning. The sleeping girl, May White of Meadville, Ingham county, up to last Wednesday, has slept one hundred and eighteen days, except for a few minutes when aroused to partake of food or medicine. When awakened, which is quite difficult to bring about, after partaking of a small quantity of food she Lmmediately falls into slumber again. Her sleep is not refreshing, but appears to take away her strength. Since she has been sleeping her weight has been reduced from 148 to S0 pounds. She is very wèak and can hardly move, and the suffering girl is very nervous. Her eyeB lack lustre and there is a feeling of weariness exhibited. Miss White is a bright girl about 23 years of age, and until this strange malady afflicted her, was an active student. Of late she has not been able to retain the medicine administered, but for the past few days has been more easily roused, and when awakened ngages in conversation; at times she suffers severe pain. The eaBe has so far baffled medical treatment. Miss White has been under the care of Dr. Brown, of Stockbridge, since her affliction and the doctor has had her removed to his home in order to study the case. He feels hopeful of restoring her to health. The case has attraeted much attention and there are numcrons callers at the doctor's house to see the girl. They are denied admission. At the beginning of her sickoeSÉ Miss White was suffering from Bi-ight's disease. It is thought that the malady from which slie now suffers was occasioiied by a fall while attendiBg school at Ypsilanti. Miss White was an industrious student who "sva fitting hernelf for a bookkeeper when taken siek; at that time 6he was cariag for her father's family and wor-king hard. The case is wonderful and exciten interest all over the country.-