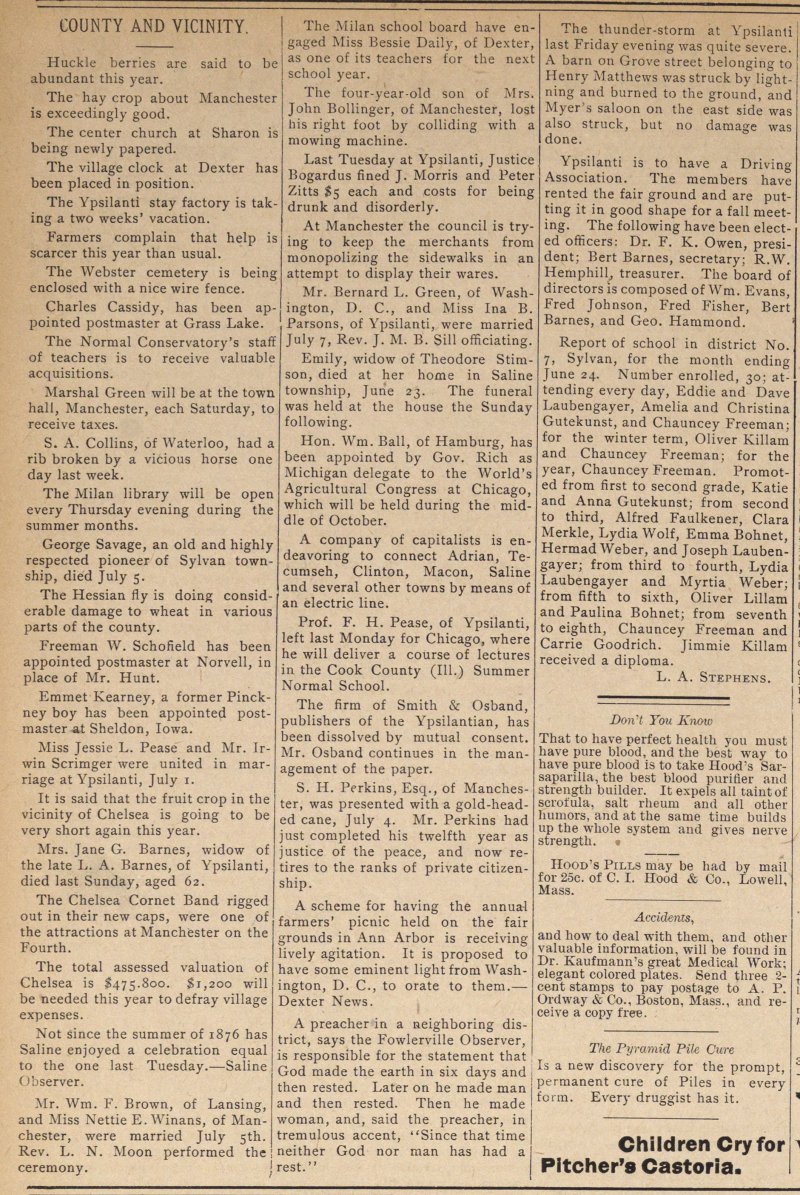 Huckle berries are said to be abundant this }rear. The hay erop about Manchester is exceedingly good. The center church at Sharon is being newly papered. The village clock at Dexter has been placed in position. The Ypsilanti stay factory is taking a two weeks' vacation. Farmers complain that help is scarcer this year than usual. The Webster cemetery is being enclosed with a nice wire fence. Charles Cassidy, has been appointed postmaster at Grass Lake. The Normal Conservatory's staff of teachers is to receive valuable acquisitions. Marshal Green will be at the town hall, Manchester, each Saturday, to receive taxes. S. A. Collins, of Waterloo, had a rib broken by a vicious horse one day last week. The Milan library will be open every Thursday evening during the summer months. George Savage, an old and highly respected pioneer of Sylvan township, died July 5. The Hessian fly is doing considerable damage to wheat in various parts of the county. Freeman W. Schofield has been appointed postmaster at Norvell, in place of Mr. Hunt. Emmet Kearney, a forrner Pinckney boy has been appointed postmaster at Sheldon, Iowa. Miss Jessie L. Pease and Mr. Irwin Scrimger were united in marriage at Ypsilanti, July 1. It is said that the fruit erop in the vicinity of Chelsea is going to be very short again this year. Mrs. Jane G. Barnes, widow of the late L. A. Barnes, of Ypsilanti, died last Sunday, aged 62. The Chelsea Cornet Band rigged out in their new caps, were one of the attractions at Manchester on the Fourth. The total assessed valuation of Chelsea is $475.800. $1,200 will be needed this year to defray village expenses. Not since the summer of 1876 has Saline enjoyed a celebration equal to the one last Tuesday. - Saline Observer. Mr. Wm. F. Brown, of Lansing, and Miss Nettie E. Winans, of Manchester, were married July 5th. Rev. L. N. Moon performed the ! ceremony. ! The Milán school board have engaged Miss Bessie Daily, of Dexter, , as one of its teachers for the next school year. The four-yearold son of Mrs. John Bollinger, of Manchester, lost his right foot by colliding with a mowing machine. Last Tuesday at Ypsilanti, Justice ' Bogardus fined J. Morris and Peter Zitts $5 each and costs for being ' drunk and disorderly. At Manchester the council is try■ ing to keep the merchants from raonopolizing the sidewalks in an ; attempt to display their wares. Mr. Bernard L. Green, of Washington, D. C, and Miss Ina B. Parsons, of Ypsilanti, were married : July 7, Rev. J. M. B. Sill officiating. Emily, widow of Theodore Stimson, died at her home in Saline township, June 23. The funeral was held at the house the Sunday following. Hon. Wm. Ball, of Hamburg, has been appointed by Gov. Rich as Michigan delégate to the World's Agricultural Congress at Chicago, which will be held during the middle of October. A company of capitalists is endeavoring to connect Adrián, Tecumseh, Clinton, Macón, Saline and several other towns by means of an electric line. Prof. F. H. Pease, of Ypsilanti, left last Monday for Chicago, where he will deliver a course of lectures in the Cook County (111.) Summer Normal School. The firm of Smith & Osband, publishers of the Ypsilantian, has been dissolved by mutual consent. Mr. Osband continúes in the management of the paper. S. H. Perkins, Esq., of Manchester, was presented with a gold-headed cane, July 4. Mr. Perkins had just completed his twelfth year as justice of the peace, and now retires to the ranks of private citizenship. A scheme for having the annua4 farmers' picnic held on the fair grounds in Ann Arbor is receiving lively agitation. It is proposed to have some eminent light from Washington, D. C, to orate to them. - Dexter News. A preacher in a neighboring district, says the Fowlerville Observer, is responsible for the statement that God made the earth in six days and I then rested. Later on he made man j and then rested. Then he made ! woman, and, said the preacher, in tremulous accent, "Since that time neither God nor man has had a rest." The thunder-storm at Ypsilanli last Friday evening was quite severe. A barn on Grove street belonging to Henry Matthews was struck by lightning and burned to the ground, and Myer's saloon on the east side was also struck, but no damage was done. Ypsilanti is to have a Driving Association. The members have rentad the fair ground and are putting it in good shape for a fall meeting. The following have been elected officers: Dr. F. K. Owen, president; Bert Barnes, secretary; R.W. Hemphill, treasurer. The board of directors is composed of Wm. Evans, Fred Johnson, Fred Fisher, Bert Barnes, and Geo. Hammond. Report of school in district No. 7, Sylvan, for the month ending june 24. Number enrolled, 30; attending every day, Eddie and Dave Laubengayer, Amelia and Christina Gutekunst, and Chauncey Freeman; for the winter term, Oliver Killam and Chauncey Freeman; for the year, Chauncey Freeman. Promoted from first to second grade, Katie and Anna Gutekunst; from second to third, Alfred Faulkener, Clara Merkle, Lydia Wolf, Emma Bohnet, Hermad Weber, and Joseph Laubengayer; from third to fourth, Lydia Laubengayer and Myrtia Weber; from fifth to sixth, Oliver Lillam and Paulina Bohnet; from seventh to eighth, Chauncey Freeman and Carrie Goodrich. Jimmie Killam received a diploma.