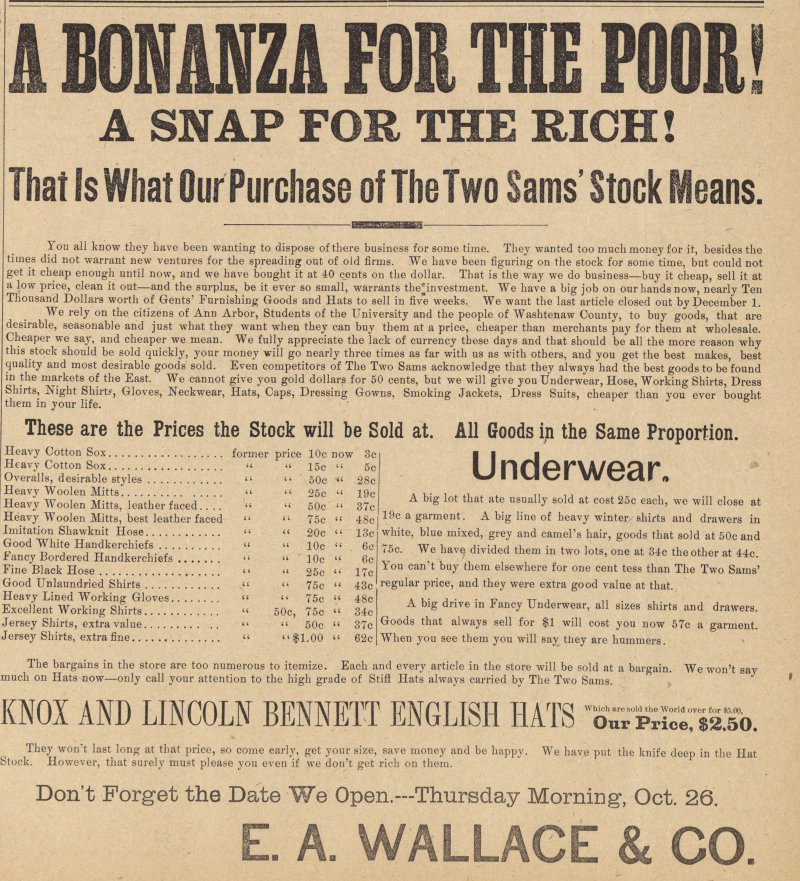 A SNAP FOR THE RICH ! Thai Is What öur Purchase of TSieïwo Sams' Stock ieans. You all know they have been wanting to dispose ofthere business for some time. They wanted too much money for it, besides the times did not warrant new ventures for the spreading out of old firms. We have been figuring on the stock for some time, but could not get it cheap enough until now, and we have bought it at 40 cents on the dollar. That is the way we do business- buy it cheap, sell it at a low price, clean it out - and the surplus, be it ever so small, warrants theinvestnient. We have a big job on our hands now, nearly Ten Thousand Dollars worth of Gents' Furnishing Goods and Hats to sell in five weeks. We want the last article closed out by December 1. We rely on the citizens of Ann Arbor, Students of the University and the people of Washtenaw County, to buy goods, that are desirable, seasonable and just what they want when they can buy them at a price, cheaper than merchants pay for them at wholesale. Cheaper we say, and cheaper we mean. We fully appreciate the lack of currency these days and that should be all the more reason why this stock should be sold quickly, your money will go nearly three times as far with us as with others, and you get the best makes, best quality and most desirable goods sold. Even competitors of The Two Sams acknowledge that they always had the best goods to be found in the markets of the East. We cannot give you gold dollars for 50 cents, but we will give you Underwear, Hose, Working Shirts, Dress Shirts, Night Shirtf, Gloves, Neckwear, Hats, Caps, Dressing Gowns, Smoking Jackets, Dress Suits, cheaper than you ever bought them in your life. ' These are the Prices the Stock will be Sold at. All Goods in the Same Proporíion. Heavy Cotton Sox former price 10c now 3c III Heavy Cotton Sox u 15c " 5c I IMP FXAÍI I Dveralls, desirable styles " " 50c " 28c W I IVIVyl WvCtl n Heavy Woolen Mitts " " 9kc u iq,, . _. , , Heavy Woolen Mitts, leather faced . . '. '. ' 0c "37c A blg lot that ate U8Ually Sld at COst 25c each' we wül clo8e at Seavy Woolen Mitts, best leather faced " " 75c " 48c 19c a garment. A big line of heavy winter shirts and drawers in [mitation Shawknit Hose " 20c " 13c white, blue mixed, grey and camel's hair, goods that sold at 50c and ZHSief :::;:■ " :: -It :.' ■ t: w!--!- .4.- ?ine Black Hose " 25c" 17c Can t y them elsewhere for one cent tess than The Two Sams' aood Unlaundried Shirts " " 75c " 43c regular price, and they were extra good value at that. ïeavy Lined Working Gloves " " 75c " 48c &. ,- a ■ v tt j i . ïxcellent Working Shirts 50c, 75c 34c g 1V6 m FanCy Underwear' a11 8izes shirts and drawers. iersey Shirts, extra value " ' 50c " 37c Goods tnat always sell for $1 will cost you now 57c a garment. rersey Shirts, extra fine " "$1.00 " 62c When you see them you will say tüey are hummers. The bargains in the store are too numerous to itemize. Each and every article in the store will be sold at a bargain. We won't say tiuch on Hats now - only cali your attention to the high grade of Stift Hats always carried by The Two Sams. ' (N0Ï AND LINCOLN BENNETT ENGLISH HATS "ophsSIo. They won't last long at that price, so come early, get your size, save money and be happy. We have put the knife deep in the Hat 'tock. However, that surely must please you even if we don't get rich on them. Don't Forget the Date We Open.- Thursday Morning, Oct. 26.