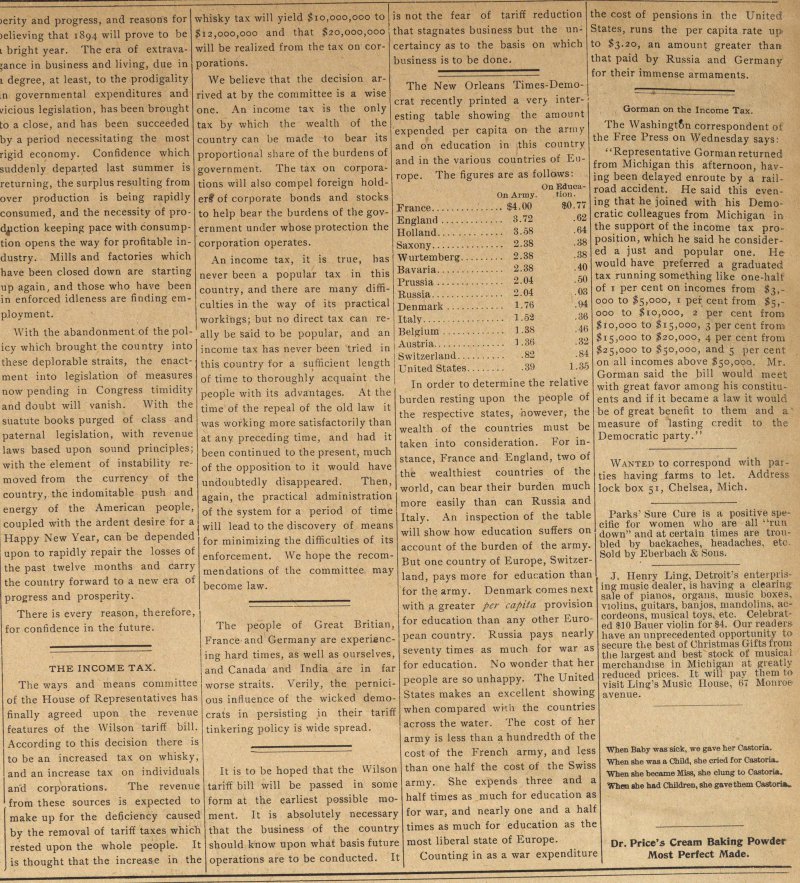 The ways and means committee of the House of Representatives has finally agreed upon the revenue features of the Wilson tariff bill. According to this decisión there is to be an increased tax on whisky, and an increase tax on individuals and corporations. The revenue from these sources is expected to make up for the deficiency caused by the removal of tariff taxes which rested upon the whole people. It is thought that the increase in the whisky tax will yield $10,000,000 to L12,000,000 and that $20,000,000 will be realized from the tax 011 corporations. We believe that the decisión arrived at by the committee is a wise one. An income tax is the only tax by which the wealth of the country can be made to bear its proportional share of the burdens of government. The tax 011 corporations will also compel foreign holder? of corporate bonds and stocks to help bear the burdens of the government under whose protection the corporation operates. An income tax, it is true, has never been a popular tax in this country, and there are many difficulties in the way of its practical workings; but no direct tax can really be said to be popular, and an income tax has never been tried in this country for a sufficient length of time to thoroughly acquaint the people with its advantages. At the time of the repeal of the oíd law it was working more satisfactorily than at any preceding time, and had it been continued to the present, much of the opposition to it would have undoubtedly disappeared. Then, again, the practical administration of the system for a period of time will lead to the discovery of means for minimizing the difficulties of its enforcement. We hope the recommendations of the committee may become law. The people of Great Britian, Franceand Germany are experLencing hard times, as well as ourselves, and Canada and India are in far worse straits. Verily, the pernicious influence of the wicked democrats in persisting in their tariff tinkering policy is wide spread. It is to be hoped that the VVilson tariff bill will be passed in some form at the earliest possible moment. It is absolutely necessary that the business of the country should know upon what basis future operations are to be conducted. It is not the fear of tariff reduction that stagnates business but the uncertaincy as to the basis on which business is to be done. The New Orleans Times-Democrat recently printed a ver interesting table showing the amount expended per capita on the arm y and on education in this country and in the various countries of Europe. The figures are as follows: On EducaOnArmy. tion. France $4.00 $0.77 England 3.72 .62 Holland 3.58 .64 Saxony 2.38 .38 Wurtemberg 2.38 .38 Bavaria 2.38 .40 Prussia 2.04 .50 Eussia 2.04 .03 Denmark 1.76 .94 Italy 1.5 -36 Belgium 1-38 .46 Austria 1-36 .32 Switzerland 82 .84 United States 39 1.35 In order to determine the relative . burden resting upon the people of the respective states, however, the wealth of the countries must be taken into consideration. For instance, France and England, two of the wealthiest countries of the world, can bear their burden much more easily than can Russia and Italy. An inspection of the table will show how education suffers on account of the burden of the army. But one country of Europe, Switzerland, pays more for education than for the army. Denmark comes next with a greater per capita provisión for education than any other European country. Russia pays nearly seventy times as much for war as for education. No wonder that her people are so unhappy. The United States makes an excellent showing when compared with the countries across the water. The cost of her army is less than a hundredth of the cost of the French army, and less than one half the cost of the Swiss army. She expends three and a half times as much for education as for war, and nearly one and a half times as much for education as the most liberal state of Europe. Counting in as a war expenditure the cost of pensions in the United States, runs the per capita rate upto $3.20, an amount greater than that paid by Russia and Germany for their immense armaments.