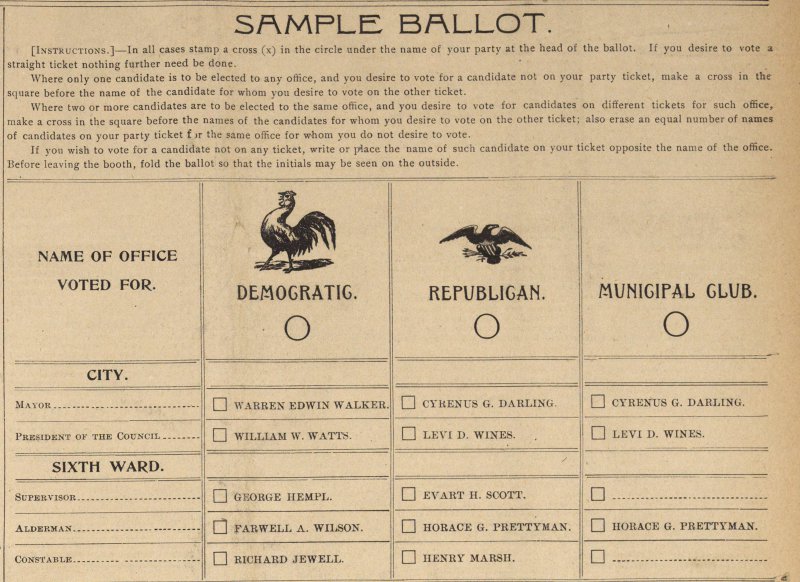 [Instructions.] - In all cases stamp a cross (x) in the circle under the name of your party at the head of the ballot. If you desire to vote a traight ticket nothing further need be done. Where only one candidate is to be elected to any office, and you desire to vote for a candidate not on your party ticket, make a cross in the quare before the name of the candidate for whom you desire to vote on the other ticket. Where two or more candidates are to be elected to the same office, and you desire to vote for candidates on different tickets for such office, ïake a cross in the square before the names of the candklates for whom you desire to vote on the other ticket; also erase an equal numberof names f candidates on your party ticket fjr the same office for whom you do not desire to vote. If yon wish to vote for a candidate not on any ticket, write or place the name of such candidate on your ticket opposite the name of the office. Sefore leaving the booth, fold the ballot so that the initials may be seen on the outside. NAME OF OFFICE Tfs voted for. DEMOGRATIG. REPUBLIGAN. MUNICIPAL GLUB. O JO O CITY. =========== ."■'" Mayor - □ WARREN EDWIN WALKER. D CYRENÜS G. DARLING. j D CYRENUS G. DARLING. President of the Council.. □ WILLI AM W. WATTS. □ LEVI D. WINES. . j D LEVI D. WINES. SIXTH WARD. ' ________ Supervisor Q GKORGE HEMPL. D EVART H. SCOTT, D - Alderman -- Q FARWELL A. WILSON. Q HORACE G. PRETTYÍÍAN. Q HORACE G. PRETTYMAN. Constablk - Q RICHARD JEWELL. □ HENRY MARSH. D - -