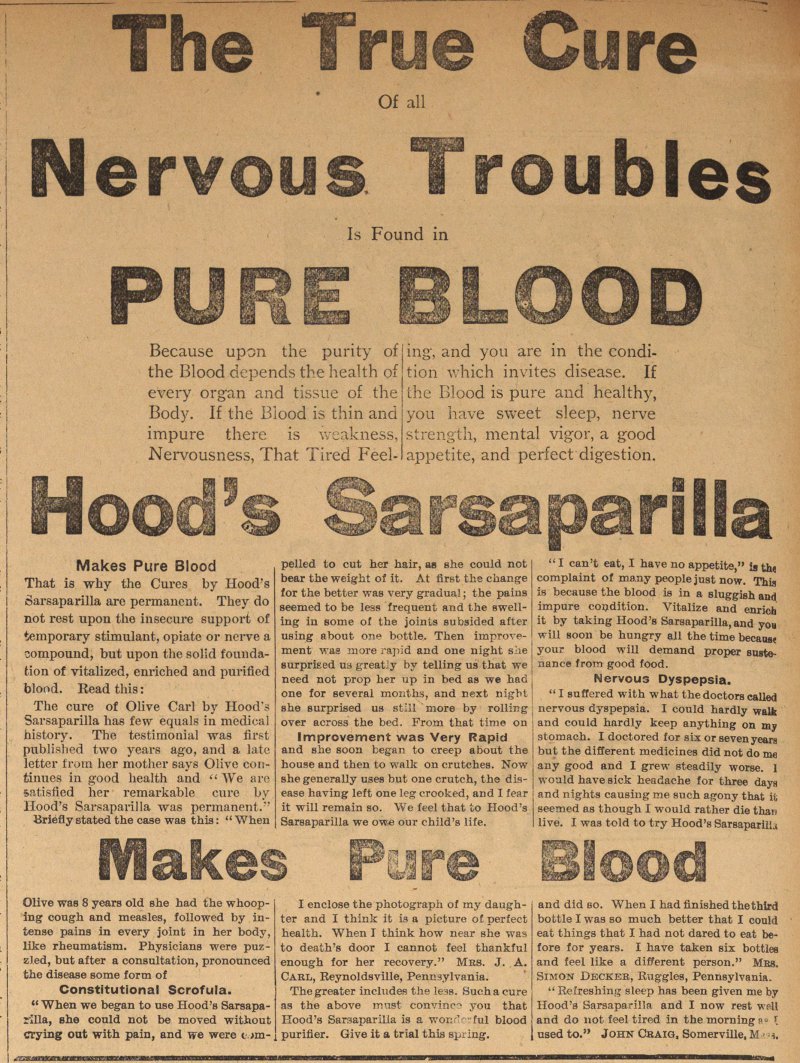 Of all Nerveus Troubles Is Found in PP 1 ii2 F3 W% 9 éF%k f 1 UrfË oLlJUD Because upon the purity of ing, and you are in the condithe Blood depends the health of tion which invites disease. If every organ and tissue of the the Blood is pure and healthy, Bod)7. If the Biood is thin and you have sweet sleep, nerve impure therc is weakness, strength, mental vigor, a good Nervousness, That Tired appetite, and perfect digestión. Makes Pure Blood That is why the Cures by Hood's Sarsaparilla aro permanent. They do not rest upon the insecure support of temporary stimulant, opiate or nerve a oompound, but upon the solid foundation of vitalized, enriched and purified blood. Readthis: The cure of Olive Cari by Hood"? Sarsaparilla has few equals in medical history. The testimonial was first published two years ago, and a late letter trom her mother says Olive continúes in good health and " We aro satisfied her remarkable cure by Hood's Sarsaparilla was permanent." Briéfly stated the case was this : " When pelled to cut her hair, as she could not bear the weight of it. At first the chance for the better was very gradual ; the pains seemed to be less frequent and the swelling in Borne oí the joints subsided after using about one bottle. Then improrement wae more rapid and one night s je Burprked ua greatJy by telling us that we need not prop her up in bed as we had one for severai months, and next night she surprised us stlll 'more by rolling over across the bed. From that time on Improvement was Very Rapid and she soon began to creep about the house and then to walk on crutches. Now she generally uses but one crutch, the disease having left one leg crooked, and I fear it will remain so. We feel that to Hood's Sarsaparilla we one our child's lile. " I can 't eat, I have no appetite," Ja tlu complaint of many peoplejust now. This is because the blood is in a sluggish and impure condition. Vitalize and enrich it by taking Hood's Sarsaparilla, and yon will soon be hungry all the time because your blood will demand proper sustonance from good food. Nervous Dyspepsia. " I suffered with what the doctora caUed nervous dyspepsia. I eonld hardly walk and could hardly keep anything on my stomach. I doctored íor six or sevenyeara but the different medicines did not do me any good and I grew steadily worse. I would have sick headache for three daya and nights causing me such agony that it seemed as though I would rather die than live. I was told to try Hood's SarsaparilU IVB&Res Pyre SloocS Olive was 8 years old she had the whooping cough and measlea, íollowed by intense pains in every joint in her body, like rheumatism. Physicians were puzzled, but after a consultation, pronounced the disease some form of Constitutional Scrofula. " When we began to use Hood's Sarsaparilla, she could not be moved without crying out with pain, and we were I endose the photograph of my daughter and I think it is a picture oL perfect health. When I think how near she was to death's door I cannot feel thankful enough for her recovery." Mes. J. A. Carl, Reynoldsville, Pennaylvania. Thegreater includes the le?ts. Sucha cure as the above must convino-! you that Hood's Sarsaparilia is a wopdorfnl blood purifier. Give it a trial this spring. and did so. When I had finished thethlrd bottle I was so much better that I could eat things that I had not dared to eat before for years. I have taken six bottles and feel like a different person." Mes. Simon Dbckeb, ltuggles, Pennsylvania. " Refreshing sleep haa been given me by Hood'a Sarsaparilla and I now rest well and do not feel tired in the morninga ï used to." John Craig, Somerville, M i.