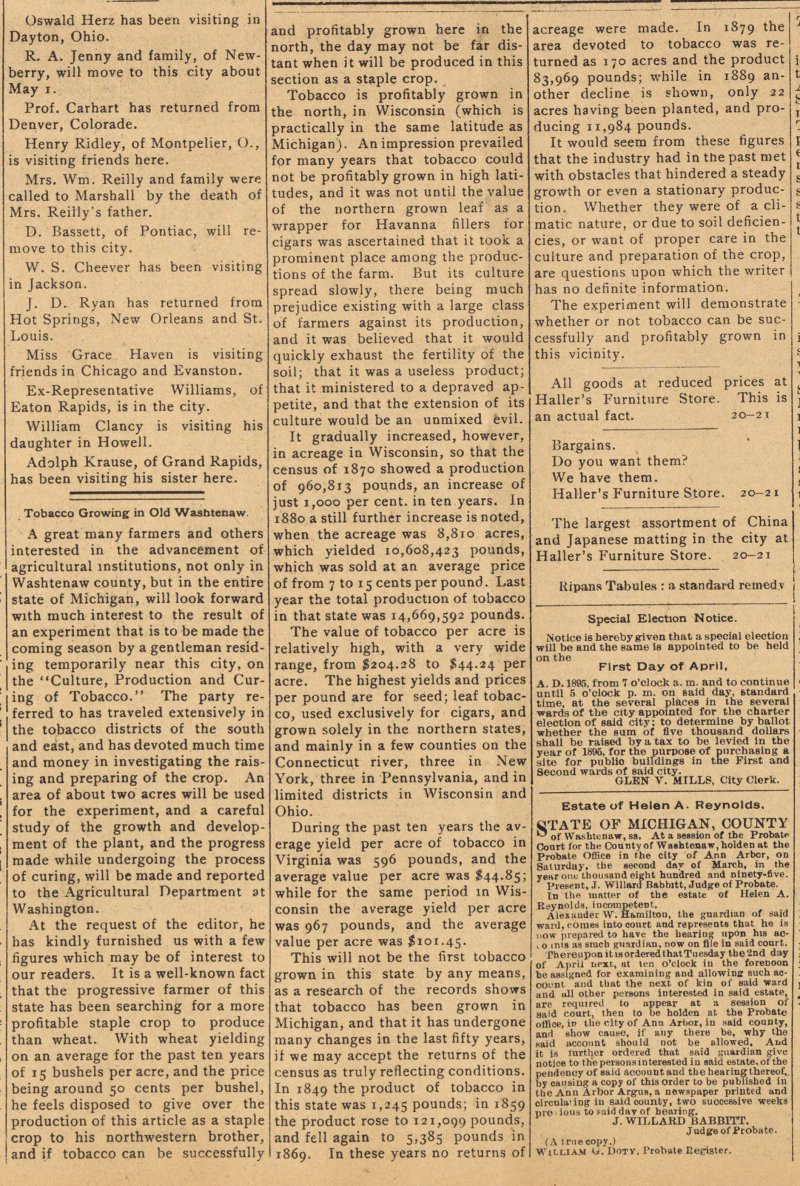 A great many farmers and others interested in the advancement of agricultural institutions, not only in Washtenaw county, but in the entire state of Michigan, will look forward with much interest to the result of an experiment that is to be made the coming season by a gentleman residing temporarily near this city, on the "Culture, Production and Curing of Tobacco." The party referred to has traveled extensively in the tobáceo distriets of the south and eást, and has devoted much time and money in investigating the raising and preparing of the erop. An area of about two acres will be used for the experiment, and a carefnl study of the growth and development of the plant, and the progres made while undergoing the proces of curing, will be made and reportec to the Agricultural Department 3 Washington. At the request of the editor, h has kindly furnished us with a few figures which may be of interest to our readers. It is a well-known fact that the progressive farmer of this state has been searching for a more profitable staple erop to produce than wheat. With wheat yielding on an average for the past ten years of 15 bushels per acre, and the price being around 50 cents per bushei, he feels disposed to give over the production of this article as a staple erop to his northwestern brother, and if tobáceo can be successfully and profitably grown here in the north, the day may not be far distant when it will be produced in this section as a staple erop. Tobacco is profitably grown in the north, in Wisconsin (which is practically in the same latitude as Michigan). An impression prevailed for many years that tobáceo could not be profitably grown in high latitudes, and it was not until the value of the northern grown leaf as a wrapper for Havanna fillers tor cigars was ascertained that it took a prominent place among the productions of the farm. But its culture spread slowly, there being much prejudice existing with a large class of farmers against its production, and it was believed that it would quickly exhaust the fertility of the soil; that it was a useless product; that it ministered to a depraved appetite, and that the extensión of its culture would be an unmixed evil. It gradually increased, however, in acreage in Wisconsin, so that the census of 1870 showed a production of 960,813 pounds, an increase of just 1,000 per cent. in ten years. In 1880 a still further increase is noted, when the acreage was 8,810 acres, which yielded 10,608,423 pounds, which was sold at an average price of f rom 7 to 1 5 cents per pound . Last year the total production of tobáceo in that state was 14,669,592 pounds. The value of tobáceo per acre is relatively high, with a very wide range, from $204.28 to $44.24 per acre. The highest yields and prices per pound are for seed; leaf tobáceo, used exclusively for cigars, and grown solely in the northern states, and mainly in a few counties on the Connecticut river, three in New York, three in Pennsylvania, and in limited districts in Wisconsin and Ohio. During the past ten years the average yield per acre of tobáceo in Virginia was 596 pounds, and the average value per acre was $44.85; while for the same period in Wisconsin the average yield per acre was 967 pounds, and the average value per acre was $101.45. This will not be the first tobáceo grown in this state by any means, as a research of the records shows that tobáceo has been grown in Michigan, and that it has undergone many changes in the last fifty years, it we may accept the returns of the census as truly reflecting conditions. In 1849 e product of tobáceo in this state was 1,245 pounds; in 1859 the product rose to 121,099 pounds, and feil again to 5,385 pounds in 1869. In these years no returns of acreage were made. In 1879 the área devoted to tobáceo was returned as 170 acres and the product 83,969 pounds; while in 1889 another decline is shown, only 22 acres having been planted, and producing 11,984 pounds. It would seem from these figures that the industry had in the past met with obstacles that hindered a steady growth or even a stationary production. Whether they were of a climatic nature, or due to soil deficiencies, or want of proper care in the culture and preparation of the erop, are questions upon which the writer has no definite information. The experiment will demónstrate whether or not tobáceo can be successfully and profitably grown in this vicinity.