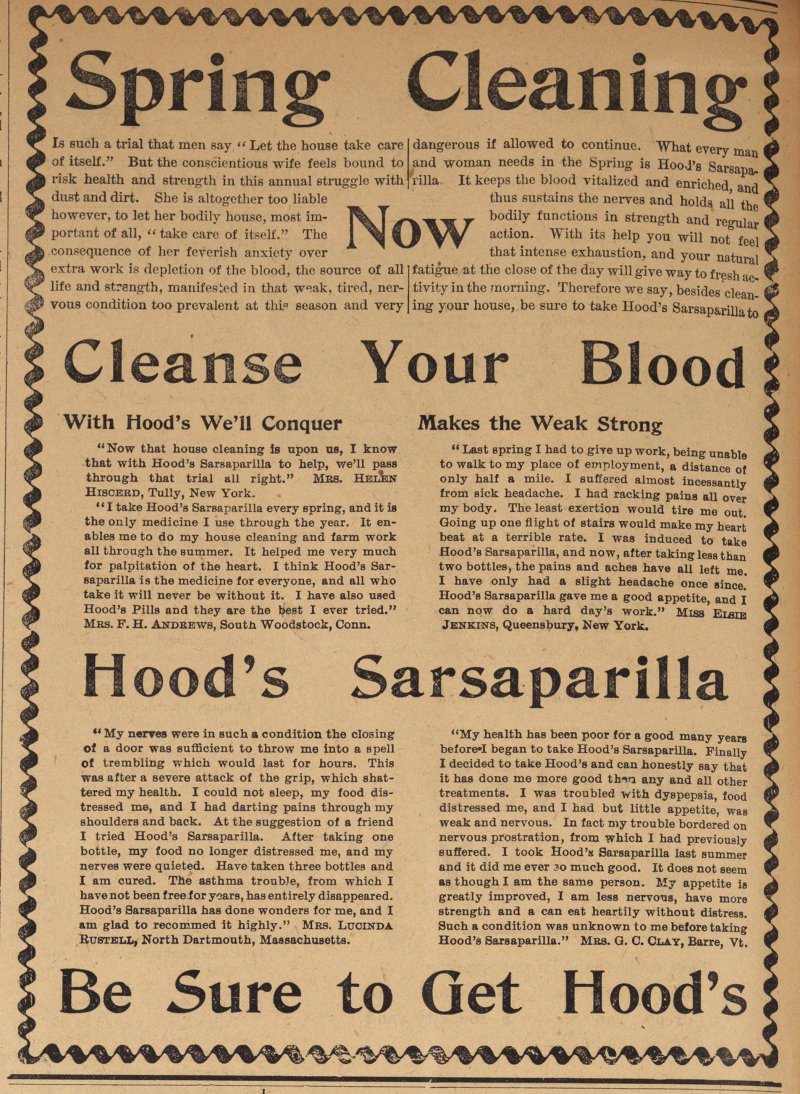 T Is such a trial that men say " Let the house take care dangerous il allowed to continue. What every ma v of itself." But the conscientious wife feels bound to and woinan needs in the Spring is Hood's Sarsana. A risk health and strength in this annual 6truggle with ïilla It keeps the blood vitalized and enriched a 1 5 L dust and dirt. She is altogether too liable thus sustains the nerves and holds all th K W however, to let her bodily house, most TT X-mr T boclily fonctions in strength and resul W portant of all, " take care of itself." The 1 il yy action. With its help you will not fee ét L consequence of her feverish anxiety over that intense exhaustion, and your natur 1 V extra work is deplction of the blood, the source of all fatigue at the close of the day will give way to f resh ac x lifc and strength, manifesied in that weak, tired, nertivity in the rnorning. ïherefore we say, besides clea 0 áp vou8 condition too prevalent at thL season and very ing your house, be sure to take ïlood's Sarsaparilla to i Cleanse Your Blood i $ With Hood's We'll Conquer Makes the Weak Strong ? (W "Now that house cleaning 1b upon ns, I know " Last spring I had to give up work, being unable á& that with Hood's Sarsaparilla to help, we'll pass to walk to my place of employment, a distance of x through that trial all right." MES. tth-tW only half a mile. I suffered almost incessantly & h Hiscbbd, Tully, New York. from sick headache. I had racking pains all over "I take Hood's Sarsaparilla every spring, and it is my body. The least eiertion would tire me out W P the only medicine I use through the year. It enGoing up one flight oí stairs would make my heart ables me to do my house cleaning and iarm work beat at a terrible rate. I was induced to take . "Sjr all through the summer. It helped me very much Hood's Sarsaparilla, and now, after taking lessthan 9 P lor palpitation of the heart. I think Hood's Sartwo bottles, the pains and aches have all left me A T saparilla Í9 the medicine for everyone, and all who I have only had a slight headache once since' ▼ & take it will never be without it. I have also used Hood's Sarsaparilla gave me a good appetite and I w k Hood's Pilla and they are the best I ever tried." can now do a hard day's work." Miss EiaiE Mes. F. H. Akdebws, Soutn Woodstock, Conn. Jbnkins, Queensbuxy, New York. & ! Hood's Sarsaparilla Á " My nerres were in such a condition the closing "My health has been poor for a good many years A of a door was sufficient to throw me into a spell beforeI began to take Hood's Sarsaparilla. Finally 9 w of trembling which would last for hours. This I decided to take Hood's and can honestly say that D was after a severe attack of the grip, which shatit has done me more good thvi any and all other tered my health. I could not sleep, my food distreatments. I was troubled with dyspepsia, food A tressed me, and I had darting pains through my distressed me, and I had but little appetite, was ] C shoulders and back. At the suggestion of a friend weak and nervous. In fact my trouble border'ed on P I tried Hood'a Sarsaparilla. After taking one nervous prostration, from which I had previously Á L bottle, my food no longer distressed me, and my suffered. I took Hood'a Sarsaparilla last summer nerves were quieted. Have taken three bottles and and it did me ever 30 much good. It does not seem M I am cured. THe asthma troubJe, from which I as though I am the same person. My appetite ig jv have not been f ree for yoars, has entirely disappeared. greatly improved, I am less nervous, have more 0 Hood's Sarsaparilla has done wonders for me, and I strength and a can eat heartily without distress. 0 am glad to recommed it highly." Mes. Lucinda. Sucha condition was unknown to me before taking RustbIjI., North Dartmonth, Massachusetts. Hood's Sarsaparilla." Mes. G. C. Clay, Barre, Vt. & l Be 5ure to Qet Hood's l