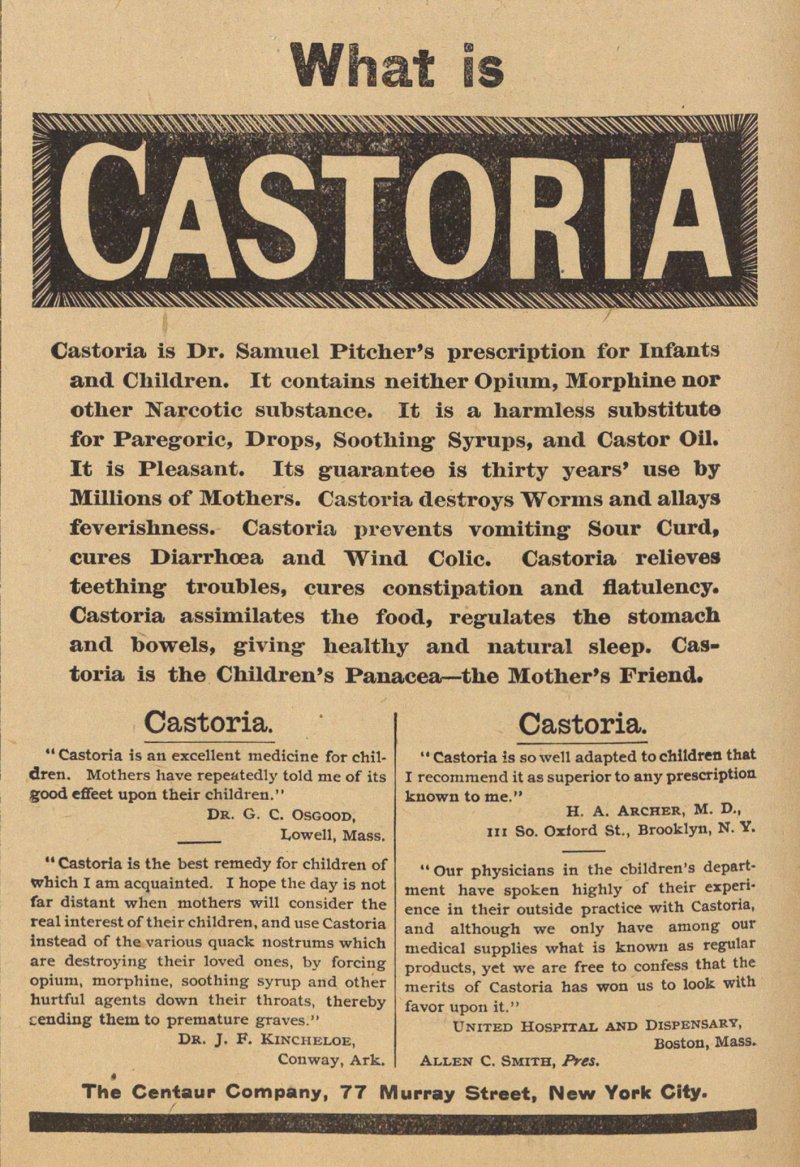 Castoria is Dr. Samuel Pitcher's prescription for Infanta and Chilclren. It contains neither Opium, Morphine nor otlier Narcotic substance. It is a harmless substituto for Paregoric, Drops, Syrups, and Castor Oil. It is Pleasant. lts gnaraniee is thirty years' use by Mili ons of Mothers. Castoria destroys Wcnns and allays feverishness. Castoria prevenís vomiting Sour Curd, cures Diarrhoea and Wind Colic. Castoria relieves teething troubles, cures constipation and flatulency. Castoria assimilates the food, reg-ulates the stomach and bowels, giving healthy and natural sleep. Castoria is the Children's Panacea- the Mother's Friend. Castoria. Castoria. "Castoria is an excellent medicine for chil"Castoria is sowell adapted to children that dren. Mothers have repeatedly told me of its I recommend it as superior to any prescriptioa good effeet upon their children." known to me." Dr. G. C. Osgood, Archer, M. D., Lowell, Mass. i So. Oxford St., Brooklyn, N. Y. " Castoria is the best remedy for children of .. Our physicians in the cbildren's departwhich I am acquainted. I hope the day is not ment have spoken highiy of their erperifar distant when mothers will consider the ence n their outside practice with Castoria, real interest of their children, and use Castoria and aithough we only have among our instead of the various quack nostrums which medical supplies what is known as regular are destroying their loved ones, by forcing products, yet we are free to confess that the opium, morphine, soothing syrup and other merits of Castoria has won us to look with hurtful agents down their throats, thereby favor upon it .. cending them to premature graves." United Hospital and Dispensary, Dr. J. F. Kincheloe, Boston, Mass. Conway, Ark. Allen C. Smith, Pres. t The Centaur Company, 77 Murray Street, New York City.