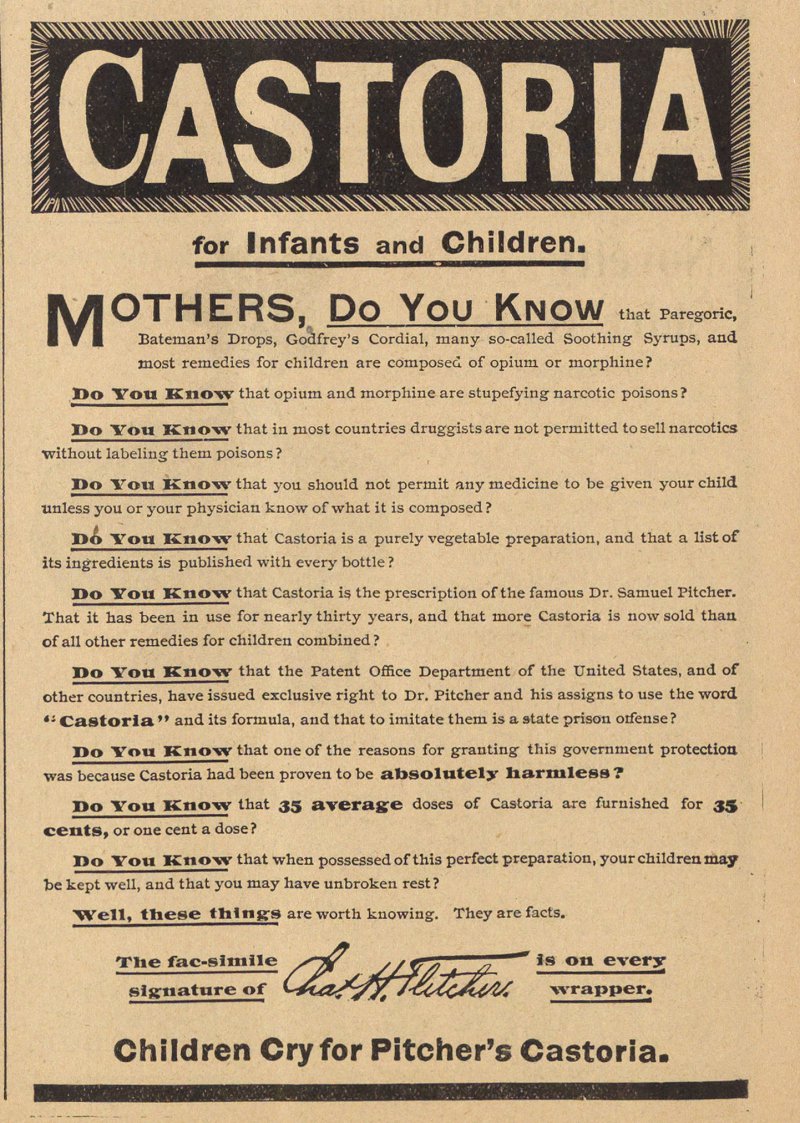 for Infants and Children. MOTHERS, Po You Know L&+ Bateman's Drops, Godfrey's Cordial, many so-called Soothing Syrups, and most remedies for children are composed of opium or morphine? Po You Know that opium and morphine are stupefying narcotic poisons ? Do You Know that in most countries druggistsare not permitted to sell narcotics without labeling thein poisons ? Po You Know that you should not perniit any medicine to be given your child linless you or your physiciau know of what it is composed ? PO You Knotv that Castoria is a purely vegetable preparation, and that a list of its ingredients is published with every bottle ? Po You Know that Castoria is the prescription of the famous Dr. Samuel Pitcher. That it has been in use for nearly thirty years, and that more Castoria is now sold than of all other remedies for children combined ? Po You Know that the Patent Office Department of the United States, and of other countries, have issued exclusive right to Dr. Pitcher and his assigns to use the word ' Castoria" and its formula, and that to imítate theni is a átate prison otfense? Po You Know that one of the reasons for this government protectie was because Castoria had been proven to be absolutely harmless 7 Po You Know that 35 average doses of Castoria are furnished for 35 cents, or one cent a dose? Po You Know that when possessedof this perfect preparation, yourchildrenmay be kept well, and that you may have unbroken rest? Vell, these Ihings are worth knowing. They are facts. The fac-simlle yT fTT . 7 " is "" every; sijrnature of &&j% J'é!sCCL4l wrapper. Children Cry for Pitcher's Castoria.