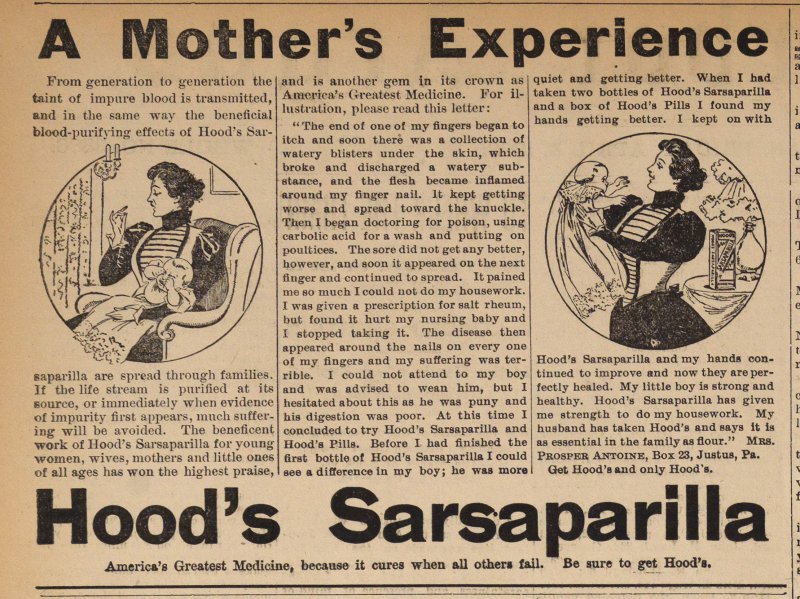 A Mother's Experience From generation to generation the taint of impure blood is trans mitted, and in the same way tlie beneficial blood-purifying effects of Hood's saparilla are spread through families. If the life stream is purified at its source, or immediately when evidence of impurity first appears, ïnueh suffering will be avoided. The beneflcent work of Hood's Sai-saparilla for young woinen, wives, mothers and little ones of all aares has won the htehest praise, and is another gem in its crown as America's Greatest Medicine. For illustvation, pleasc rcad this letter: " The end of one of my fingers began to itch and soon therè was a coüection of watery blisters under the skin, which broke and discharged a watery substance, and the flesh became inflamed around my finger nail. lt kept getting worse and spread tovvard the knuckle. Then I began doctoring for poison, using carbolic acid for a wash and putting on poultices. The sore did not get any better, however, and soon it appeared on the next finger and continued to spread. It pained me so much I could uot do my housework. I was given a prescription for salt rheum, but found it hurt my nursing baby and I stopped taking it. The disease then appeared around the nails on every one of my fingers and my suffering was terrible. I could not attend to my boy and was advised to wean him, but I hesitated about this as he was puny and nis digestión was poor. At this time I concluded to try Hood's Sarsaparilla and Hood's Pilis. Before I had finished the first bottle of Hood's Sarsaparilla I could see a difference in mv boy; he was more quiet and getting better. When I had baken two bottles of Hood'a Sarsaparilla and a box of Hood's Pilla I found my hands getting better. I kept on with Hood's Sarsaparilla and my hands continued to improve and now they are perfectly healed. My little boy is strong and healthy. Hood's Sarsaparilla has given me atrength to do my housework. My husband has taken Hood's and says it is as essential in the iamily as flour." Mbs. Prospkb Antoine, Box 23, Justus, Pa. Get Hood's and only Hood's. America'8 Greatest Medicine, because it cures when all other lail. Be sure to get Hood'a.