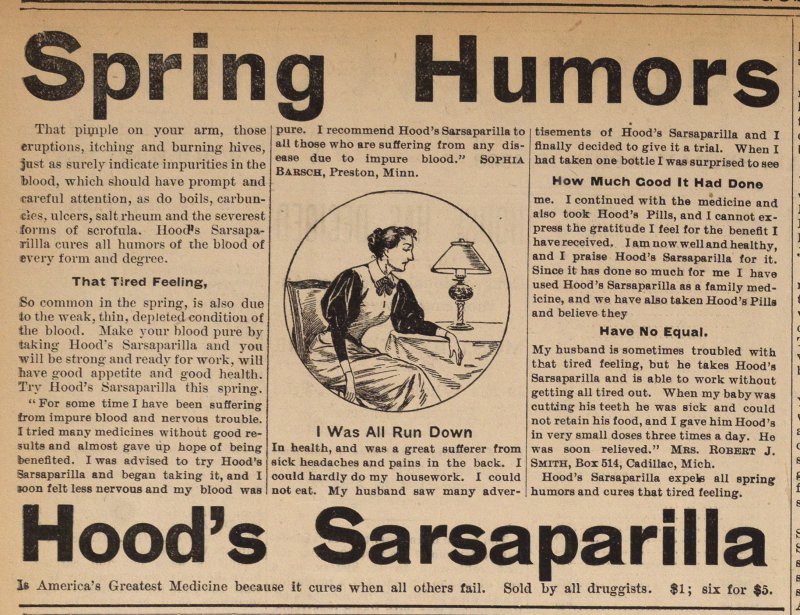 Spring Humors That pimple on your arm, those eruptions, itching and burning hivcs, jnst as surely indícate impurities in the blood, wliich should have prompt and rareful attention, as do boils, carbunclos, ulcera, salt rheum and the scverest forms of scrofula. IlootPs Sarsaparillla cures all humors of the blood of every form and degree. That Tired Feeling, So conunon in the spring, is also due to the weak, thin, depleted condition of tlie blood. [ake your blood pure by taking Hood's Sarsaparilla and you will be strong and ready for work. wiB have pood appetite and good health. ïry Hood's Sarsaparilla this spring. " For some time I have been suffering iroin impure blood and nervous trouble. I tried many medicines without good results and almost gave up hope of being benefited. I was advised to try Hood's Sarsaparilla and began taking it, and I loon feit less nervous and mv blood was pure. I recommend Hood's Sarsaparilla to all those who are suffering from any disease dae to impure blood." Sophia Baksch, Preston, Minn. I Was Al! Run Down In health, and was a great sufferer from sick headaches and pains in the back. I could hardly do my housework. X could not eat. My husband saw many tisements of Hood's Sarsaparilla and I flnally decided to give it a trial. When I had taken one bottle I was surprised to see How Much Cood It Had Done me. I continued with the medicine and also took Hood's Pilis, and I cannot express the gratitude I leel for the benefit I have received. I am now well and healthy, and I praise Hood's Sarsaparilla for it. Since it has done so much for me I have used Hood's Sarsaparilla as a family medicine, and we have also taken Hood's Pilis and believe they Have No Equal. My husband is sometimos troubled with that tired feeling, but he takes Hood's Sarsaparilla and is able to work without getting all tired out. When my baby was cutting nis teeth he was sick and could not retain his food, and I gave him Hood 'a in very small doses three times a day. He was soon relieved." Mrs. Eobert J. Smith, Box 514, Cadillac, Mich. Hood's Sarsaparilla expele all spring li n Tn orft nr)H putas t.hot. t.íroH foclin 1 America's Greatest Medicine becanse it cures when all others fail. Sold by all druggists. $1; six Lor $5.