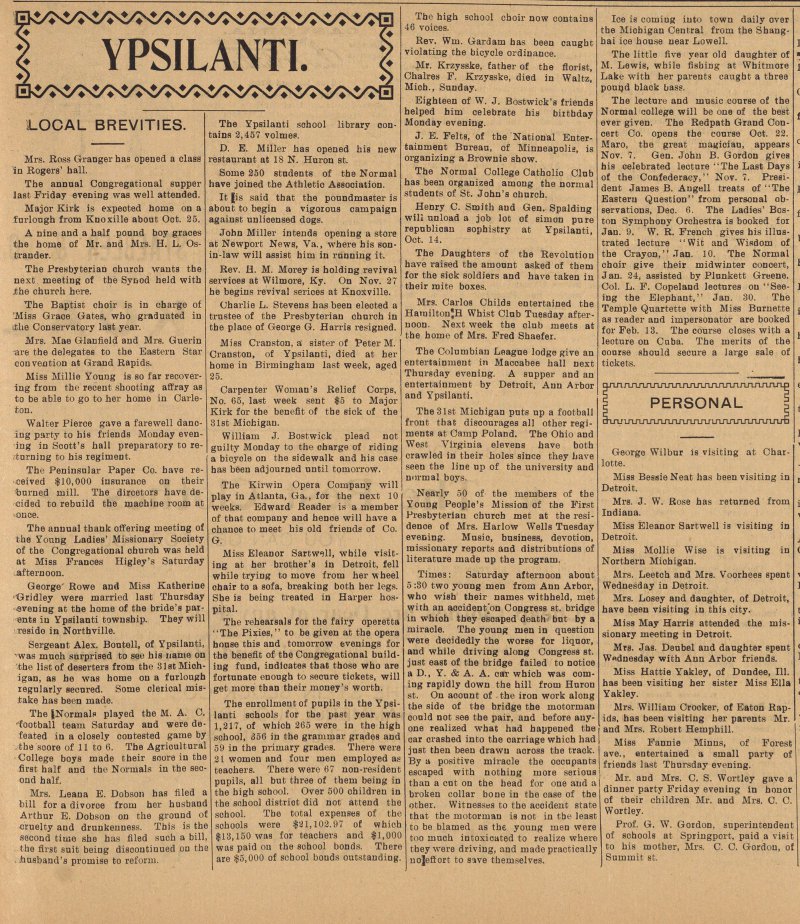 Mrs. Ross Granger has opened a class in Rogers' hall.

Major Kirk is expected home on a furlough from Knoxille about Oct. 25.

A nine and a half pound boy graces the home of Mr. and Mrs. H. L, Ostrander.

The Presbyterian church wants the next meeting of the Synod held with the church here.

The Baptist choir is in charge of Miss Grace Gates, who graduated in the Conservatory last year.

Mrs. Mae Glanfield and Mrs. Guerin are the delegates to the Eastern Star convention at Grand Rapids.

Miss Millie Young is so far recovering from the recent shooting affray as to be able to go to her home in Carleton.

The Peninsular Paper Co. have received $10,000 insurance on their burned mili. The directors have decided to rebuild the machine room at once.

The annual thank offering meeting of the Young Ladies' Missionary Society of the Congregational church was held at Miss Frances Higley's Saturday afternoon.

George Rowe and Miss Katherine Gridley were married last Thursday evening at the home of the bride's parents in Ypsilanti township. They will reside in Northville.

Sergeant Alex. Boutell, of Ypsilanti, was much surprised to see his name on the list of deserters from the 31st Michigan, as he was home on a furlough regularly secured. Some clerical mistake has been made.

The Normals played the M. A. C. football team Saturday and were defeated in a closely contested game by the score of 11 to 6. The Agricultural College boys made their score in the first half and the Normals in the second half.

Mrs. Leana E. Dobson bas filed a bill for a divoroe from her husband Arthur E. Dobson on the ground of cruelty and drunkenness. This is the second time she has filed such a bill, the first suit being discontiued on the husband's promise to reform.

Some 250 students of the Normal have joined the Athletic Association.

It is said that the poundmaster is about to begin a vigorous campaign against unlicensed dogs.

John Miller intends opening a store at Newport News, Va., where his son-in-law will assist him in running it.

Charlie L. Stevens bas been elected a trustee of the Presbyterian church in the place of George G. Harria resigned.

Miss Cranston, a sister of Peter M. Cranston, of Ypsilanti, died at her home in Birmingham last week, aged 25.

Carpenter Woman's Relief Corps, No. 65, last week sent $5 to Major Kirk for the benefit of the sick of the 31st Michigan.

William J. Bostwick plead not guilty Monday to the charge of riding a bicycle on the sidewalk and his case has been adjourned until tomorrow.

The Kirwin Opera Company will play in Atlanta, Ga., for the next 10 weeks. Edward Reader is a member of that company and hence will have a chance to meet his old friends of Co. G.

Miss Eleanor Sartwell, while visiting at her brother's in Detroit, fell while trying to move from her wheel chair to a sofa, breaking both her legs. She is being treated in Harper hospital.

The rehearsals for the fairy operetta "The Pixies, " to be given at the opera house this and tomorrow evenings for the benefit of the Congregational building fund, indicates that those who are fortunate enough to secure tickets, will get more than their money's worth.

The enrollment of pupils in the Ypsilanti schools for the past year was 1,217, of which 265 were in the high school, 356 in the grammar grades and 59 in the primary grades. There were 21 women and four men employed as teachers. There were 67 non-resident pupils, all but three of them being in the high scbool. Over 500 children in the school district did not attend the school. The total expenses of the schools were $21,102.97 of which $13,150 was for teachers and $1,000 was paid on the school bonds. There are $5,000 of school bonds outstanding.

Rev. Win. Gardam has been caught violating the bicycle ordinance.

J. E. Felts, of the National Entertainment Boreau, of Minneapolis, is organizing a Brownie show.

The Normal College Catholic Club has been organized among the normal students of St. John's church.

The Daughters of the Revolution have raised the amount asked of them for the sick soldiers and have taken in their mite boxes.

The 31st Michigan puts up a football front that discourages all other regiments at Camp Poland. The Ohio and West Virginia elevens have both crawled in their holes since they have seen the line np of the university and normal boys.

Nearly 50 of the members of the Young People's Mission of the First Presbyterian church met at the residence of Mrs. Harlow Wells Tuesday evening. Music, business, devotion, missionary reports and distributions of literature made op the program.

Times: Saturday afternoon about 5:30 two young men from Ann Arbor, who wish their names withheld, met with an accident on Congress st. bridge in which they escaped death but by a miracle. The young men in question were decidedly the worse for liquor, and while driving along Congress st. just east of the bridge failed to notice a D. Y. & A. A. car which was coming rapidly down the hill from Huron st. On accont of the iron work along the side of the bridge the motorman could not see the pair, and before anyone realized what had happened the car crashed into the carriage which had just then been drawn across the track. By a positive miracle the occupants escaped with nothing more serious than a cut on the head for one and a broken collar bone in the case of the other. Witnesses to the accident state that the motorman is not in the least to be blamed as the young men were too much intoxicated to realize where they were driving, and made practically no effort to save themselves.

Ice is corning into town daily over the Michigan Central from the Shanghai ice hou.se near Lowell.

The little five year old daughter of M. Lewis, while fishing at Whitmore Lake with her parents caught a three pound black bass.

The lecture and music course of the Normal college will be one of the best ever given. The Redpath Grand Concert Co. opens the course Oct. 22. Maro, the great magician, appears Nov. 7. Gen. John B. Gordon gives his celebrated lecture "The Last Days of the Confederacy, " Nov. 7. President James B. Angell treats of '"The Eastern Question" from personal observations, Dec. 6. The Ladies' Boston Symphony Orchestra is booked for Jan. 9. W. R. French gives his illustrated lecture "Wit and Wisdom of the Crayon," Jan. 10. The Normal choir give their midwinter concert, Jan. 24, assisted by Plunkett Greene. Col. L. F. Copeland lectures on "Seeing the Elephant," Jan. 30. The Temple Quartette with Miss Burnette as reader and impersonator are booked for Feb. 13. The course closes with a lecture on Cuba. The merits of the course should secure a large sale of tickets.