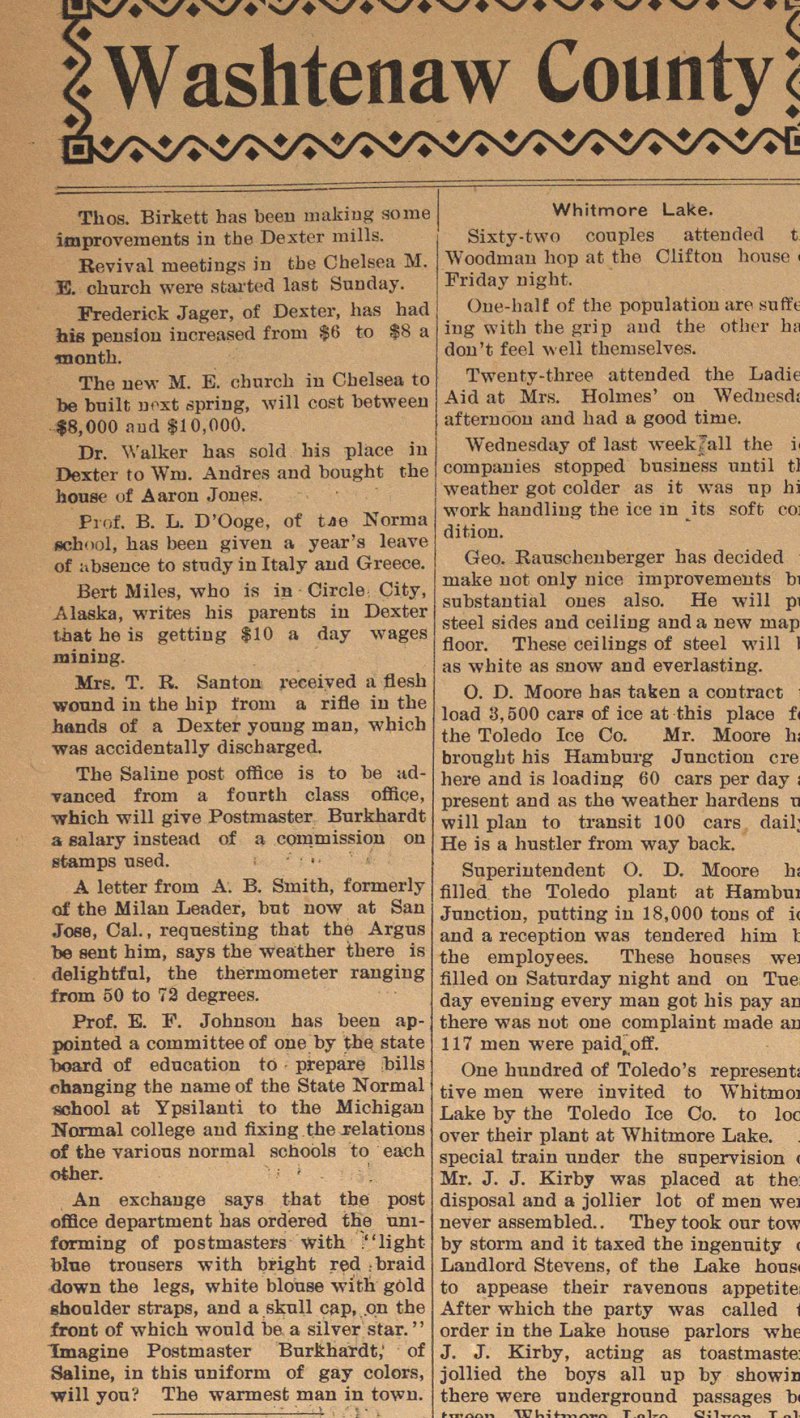 Thos. Birkett has been niaking sorae improvements in the Dexter milla. Revival meetings in the Chelseu M. B. church were staited last Sunday. í"rederick Jager, of Dexter, has had his pension increased from $6 to $8 a snonth. The new M. E. church in Chelsea to be built next spring, will cost betweeu $8,000 aud $10,000. Dr. Walker has sold his place in Dexter to Wm. Andrés and bought the house of Aaron Jones. Prof. B. L. D'Ooge, of tüe Norma school, has been given a year's leave of .bseuce to stndy in Italy and Greece. Bert Miles, who is in Cirole City, Alaska, writes his parents in Dexter táat he is getting $10 a day wages miniug. Mrs. T. R. Santón veceiyed a flesh wound in the hip trom a rifle in the hands of a Dexter yonng man, which was accidentally discharged. The Saline post office is to be advanced from a fonrth class office, ■which will give Postmaster Burkhardt a ealary instead of a commission on stamps used. ■ A letter from A. B. Smith, formerly of the Milan Leader, bnt now at San Joee, Cal. , requesting that the Argns be sent him, says the weather there is delightful, the thermometer ranging from 50 to 72 degrees. Prof. E. F. Johnson has been appointed a committee of one by the state board of education to prepare bilis ohanging the name of the State Normal school at Ypsilanti to the Michigan Normal college and fixing the .relations of the varióos normal schools to each other. ; ' An exchange says that the post office departnient has ordered the nnifonning of postmasters With ;"light blue tronsers with bright red :braid down the legs, white blohse with gold ehoalder straps, and a skull cap, ..on the front of which wonld be a silver star. " Imagine Postmaster Bnrkhaïdt,' of Saline, in this uniform of gay colors, ■will yon? The warmest man in town.