The above cut is a very good likeness of... 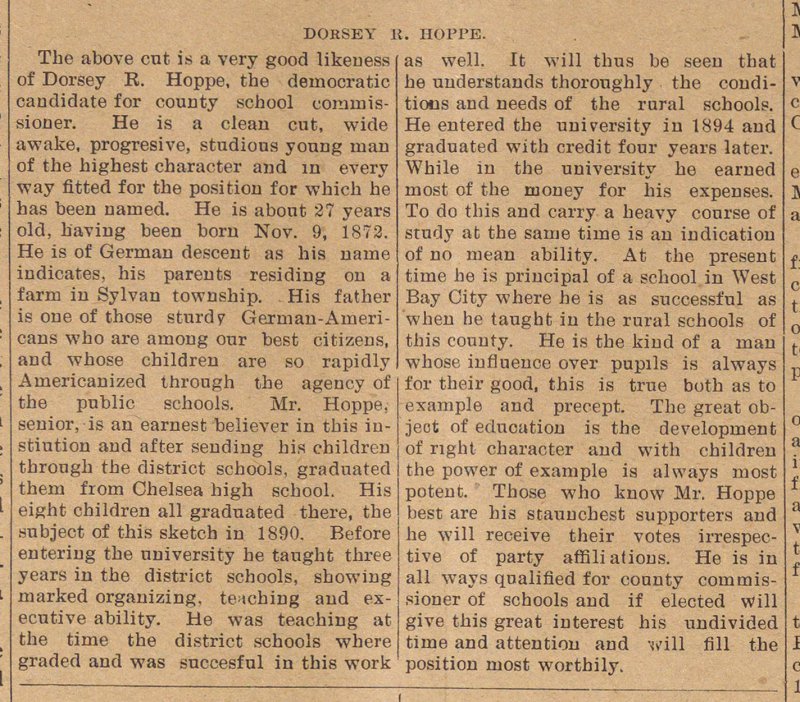 lhe above cut is a very good likeness of Dorsey R. Hoppe, the democratie candidate for county school commissioner. He is a clean cut, wide awake, progresive, studious youag man of the highest character and in every way fitted for the position for which he has been named. He is abont 27 years old, having been born Nov. 9, 1872. He is of Germán descent as his name indicates. his parents residing on a farm in Sylvan township. . His father is one of those stnrdy German-Americans who are among our best citizeus, and whose children are so rapidly Arnericanized throngh the agency of the public schools. Mr. Hoppe, senior, is an earnest believer in tbis instiution and after sending his children throngh the district schools, graduated thera from Chelsea high school. His eight children all graduated there, the subject of this sketch in 1890. Before entering the university he tanght three years in the district schools, showing inarked organizing. teaching and executive ability. He was teaching at the time the district schools where graded and was succesful in this work as well. It will thus be seeu that he imderstands thoronghly the couditions and needs of the rural schools. He entered tbe university in 1894 and graduated with credit four years later. While iu the university he earned most of the money for his expenses. To do this and carry a heavy conrse of study at the same time is au indication of no mean ability. At the present time he is principal of a school in West Bay City where he is as successful as when he taught iu the rural schools of this couuty. He is the kiud of a man whose inflaeuce over pupils is always for their good, this is true both as to example and preeept. The great objeot of edncatiou is the development of right character and with children the power of example is always most potent. Those who know Mr. Hoppe best are his staunchest supporters and he will receive their votes irrespective of party affiliations. He is in all ways qualified for connty comtnissioner of schools and if elected will give this great interest his undivided time and attentiou and will fill the position most worthily.