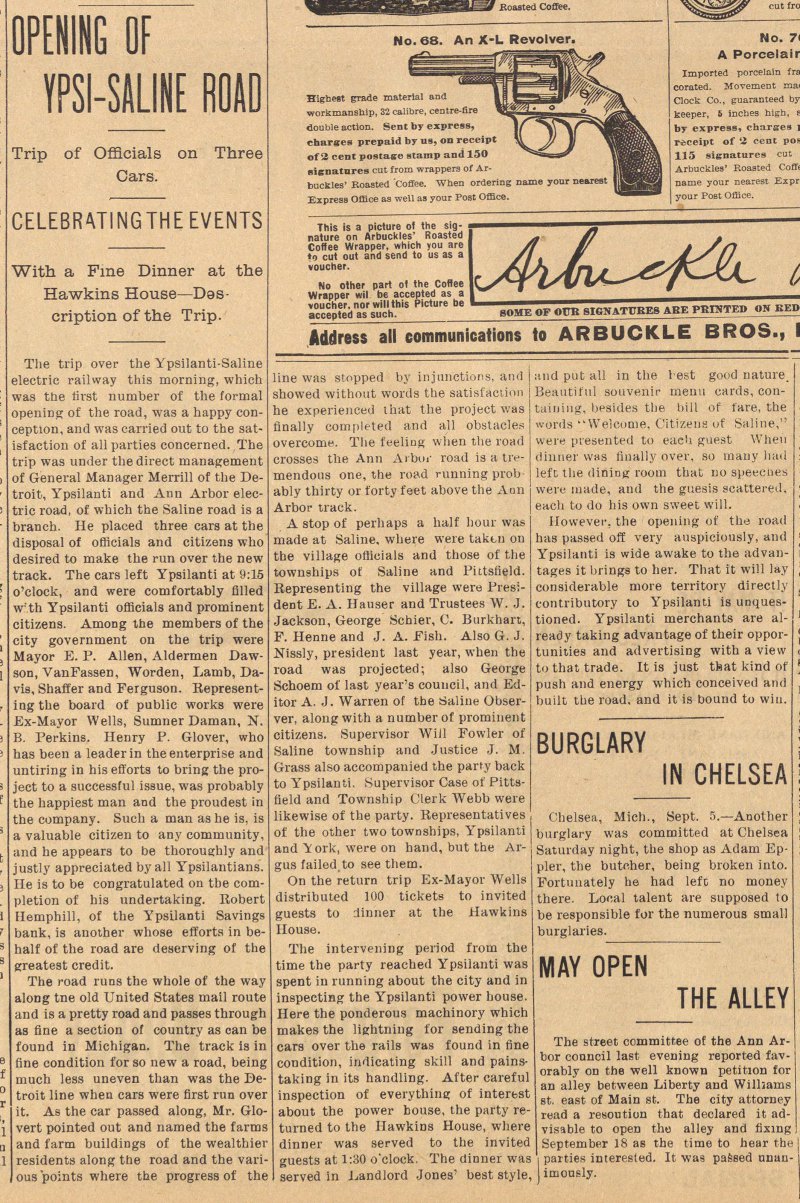 The trip over the Ypsilanti-Saline electric railway this morning, which was the iivst number of the formal opening of the road, was a happy conception, and was carried out to the satisfaetion of allparties concerned. The trip was under the direct management of General Manager Merrill of the Detroit, Ypsilanti and Ann Arbor eleetric road, of which the Saline road is a branch. He placed three cars at the disposal of officials and citizens who desired to make the run over the new track. The cars left Ypsilanti at 9:15 o'clock, and were comfortably fllled w'th Ypsilanti officials and prominent citizens. Among the members of the city government on the trip were Mayor E. P. Allen, Aldermen Dawson, VanFassen, Worden, Lamb, Davis, Shaffer and Ferguson. Representing the board of public works were Ex-Mayor Wells, Sumner Daman, N. B. Perkins. Henry P. Glover, who has been a leader in the enterprise and untiring in nis eft'orts to bring the project to a successful issue, was probably the happiest man and the proudest n the company. Such a man as he is, is a valuable citizen to any community, and he appears to be thoroughly and justly appreciated by all Ypsilantians. Ile is to be congratulated on tbe completion of his undertaking. Robert Hemphill, of the Ypsilanti Savings bank, is another whose efforts in behalf of the road are deserving of the greatest credit. The road runs the whole of the way along tne old United States mail route and is a pretty road and passes through as fine a section of country as can be found in Michigan. The track is in fine condition for so new a road, being much less uneven than was the Detroit line when cars were first run over it. As the car passed along, Mr. Glovert pointed out and named the farms and farm buildings of the wealthier residents along the road and the various points where the progress of the line was stopped by injunctions, and showed without words tbe satisfáction he experienced that the project was ! finally completed and all obstacles overeóme. The feeling wlien the road crosses the Ann Albor road is a Uvmendous one, the road running prob ably thirty or forty feet above the Aan Arbor track. A stop of perhaps a half Iiour was made at Saline, where were taktn on the village officials and those of the townships of Saline and Pittsiield. Eepresenting the village were President E. A. Hauser and Trustees W. J. Jackson, George Schier, G. Burkhart, F. Henne and J. A. Fluh. Also G. J. Nissly, president last year, when the road was projected; also George Schoem of last year's council, and Editor A. J. Warren of the Saline Observer, alongwith a numberof prominent citizens. Supervisor Wiil Fovvler of Saline township and Justice J. M. Grass also accompanied the party back to Ypsilanti. Supervisor Case of Pittsfield and Township Clerk Webb were likewise of the party. Representatives of the other two townships, Ypsilanti and York, were on hand, but the Argus failedto see them. On the return trip Ex-Mayor Wells distributed 100 tickets to invited guests to dinner at the Hawkins House. The intervening period f rom the time the party reached Ypsilanti was spent in running about the city and in inspecting the Ypsilanti power house. Here the ponderous machinory which makes the lightning for sending the cara over the rails was found in fine condition, indicating skill and painstaking in its handling. After careful inspection of everything of interest about the power house, the party re! turned to the HawkiDS House, where 1 dinner was served to the invited guests at 1:30 o"clock. The dinner was : served in Landlord Jones' best style, ;uid put all in the lest goud nature. Beautiful souvenir menu eards, containing, besides the bill of t'are, the words "Welcome, Citizens of Saline," were presanted to eacli guest When dinnei whs finaily over, so inany liad left the dining room that no speecnes were made, and the guesis scattered, each to do his own sweet will, However, the opening ot' the road has passed off very auspiciously, and Ypsilanti is wide awake to the advantages it brings to her. That it will lay considerable more territory directly contributory to Ypsilanti is unquestioned. Ypsilanti merchante are already taking advantage of their opportunities and advertising with a view to that trade. It is just tfeat kind of push and energy which conceived and built the road, and it is bound to win.