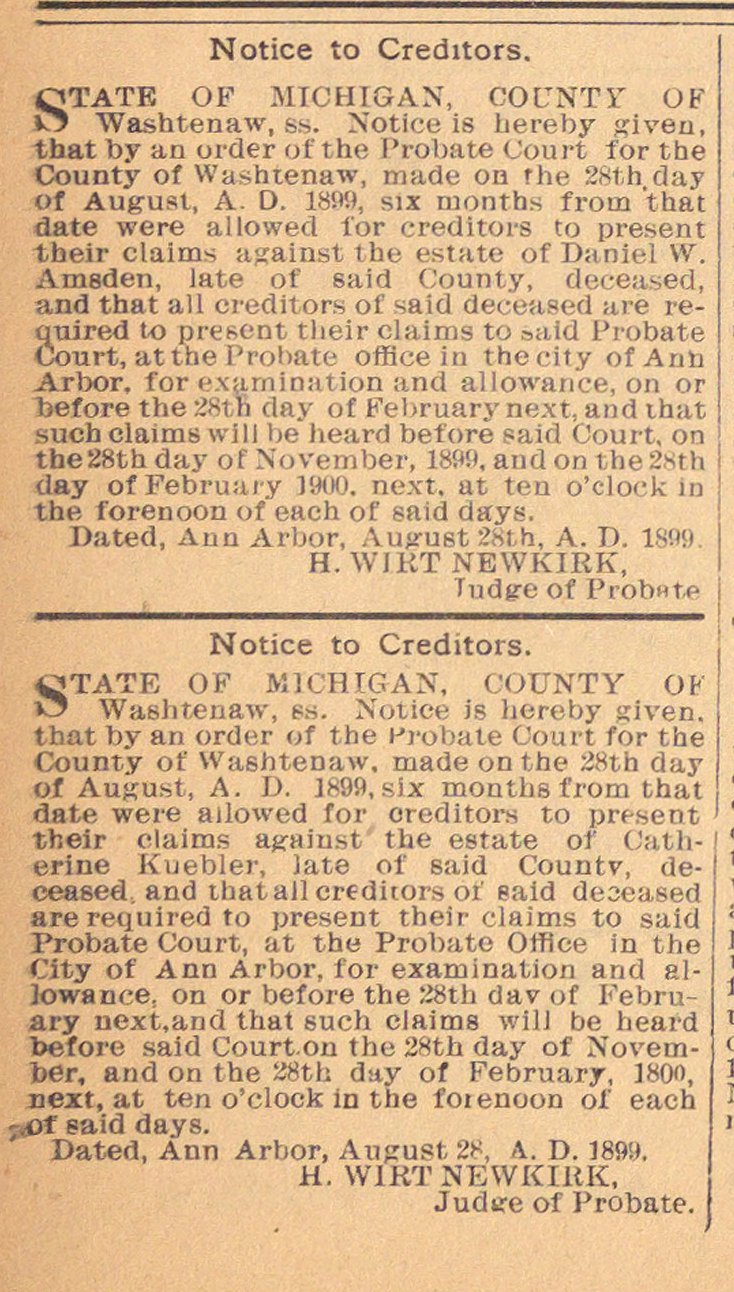 Notice to Creditors. STATE OF MICHIGAN, COCNT5T OF Washtenaw, ss. Notice is liereby giveu, tbat by an order of the Probate Court for tbe County of Wa-;htenaw, made oa rhe 28th day of August, A. D. 1899, six montbs from that date were allowed i'or creditors to present their claims against the estáte of Daniel W. Amsden, late of said County, deceased, and that all creditors of said deceased aré i equired lo present their claims to ald Probate Court, at the Probate office in thecity of Anti Arbor, for e.xamination and allowance, on or before the :;i h day of February next, and that sucb claims will be heard bef ore said Court, on the28th day of November, 1899, and on the 28th day of February 1900, next, ut ten o'clock id the forenoon of each of said clays. Oated, Aun Arbor, Augni8t28th, A. D. 1899 H.WIKTNBWKIRK, Tndife of Probwtp Notice to Creditors. STATE OF MICHIGAN, COÜNTY OF Washtenaw, s.s. Notice is hereby siven, that by an order of the Probate Court for the County of Washtenaw, made on the 28th day of AuKur-.t, A. D. ]899,six months from that date were allowed tor oreditors to present their claims agHiust the estáte of' Catherine Kuebler, late of said Countv, deceased. and ihat all creditors oi' eaid deoeased areretjuired to present their claims to said Probate Court, at the Probate Office in the City of Ann Arbor, for examination and alJowanee, on or before the !28th dav of February next, and that such claims will be heard before said Court.on the 2%h day of November, and on the Ï8th day of February, ]800, uext, at ten o'clock in the foienoon of each .Of said days. Dated, Ann Arbor, August 28, A. D. 189. H. W1KTNEWKIKK, Judtre of Probate.