Most Imposing Ever Seen Here 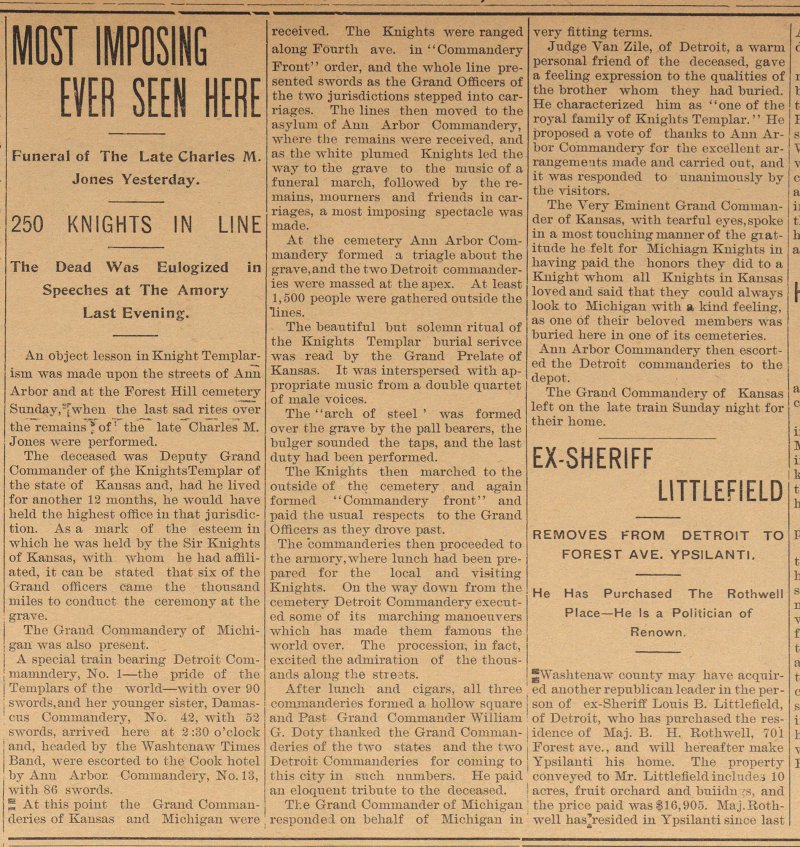 An object lesson iii Knight Templarism was made upon the streets of Aun Arbor and at the Forest Hill cemeteiy S-undajvjVhen the last sad rites over the remains of ! the late Charles M. Jones were performed. The deceased was Deputy Grand Commander of the KnightsTeinplar of the state of Kansas and, had he lived for another 12 months, he would have held the highest office in that jnrisdiction. As a mark of the esteem in which he was held by the Sir Knights of Kansas, with whom he had affiliated, it can be stated that six of the Grand officers came the thonsand miles to conduct the ceremony at the grave. The Grand Commandery of Michigan was also present. A special train bearing Detroit Commamndery, No. 1 - the pride of the Templars of the world - with over 90 swords, and her younger sister, Damascus Commandery, No. 42, with 52 swords, arrived here at 2 :30 o'clock and, headed by the Washtonaw Times Band, were escorted to the Cook hotel by Ann Arbor. Commandery, No. 13, with 8fi swords. At this point the Grand Commanderies of Kansas and Michigan were ' received. Tlie Knights were ranged along Fourth ave. in " Coniniandery Front" order, and the whole line presented swords as the Grand Officers of the two jurisdietions stepped into carriages. The Unes then moved to the asylum of Ann Arbor Conimandery, where the remains were received, and as the white plnmed Knights led the way to the grave to the musie of a funeral niarch, followed by the remains, mourners and friends in carriages, a most imposing spectacle was made. At the cemetery Ann Arbor Conimandory formed a triagle about the grave, and the two Detroit commanderies were massed at the apex. At least 1,500 people were gathered outside the lines. The beautiful but solemn ritual of the Knights Templar btirial serivce was read by the Grand Prelate of Kansas. It was interspersed with appropriate music from a doublé quartet of male voioes. The "arch of steel ' was formed over the grave by the pall bearers, the bulger sounded the taps, and the last duty had been performed. The Knights then marohed to the outside of the cemetery and again formed "Oommandery front" and paid the usual respects to the Grand Officers as they drove past. The commanderies then proceeded to the armory, where lunch had been prepared for the local and vis-iting Knights. On the way down from the cemetery Detroit Commandery executed some of its marching manoeuvers which has made them famous the world over. The procession, in fact, excited the admiration of the thousands along the strests. After liinch and cigars, all three ' commanderies formed a hollow square j and Past Grand Oommander William ' G. Doty thanked the Grand j deries of the two states and the two j Detroit Commanderies for coming to this city in such numbers. He paid an eloquent tribute to the deceased. The Grand Commander of Michigan ' responded on behalf of Michigan in very fitting tenns. Judge Van Zile, of Detroit, a warm personal friend of the deceased, gave a feeling expression to the qualities of the brother whom they had biiried. He characterized him as "one of the royal f amily of Knights Templar. " Ho j proposed a vote of thanks to Ann Arbor Commandery for the excellent arrangements made and carried out, and it was responded to tmanimously by the visitors. The Very Eminent Grand Cominander of Kansas, with tearful eyes,spoke in a most touching nianner of the giatitnde he feit for Michiagn Knights in having paid the honors they did to a Knight whom all Knights in Kansas loved and said that they could always look to Michigan with a kind feeling, as one of their beloved members was buried here in one of its cemeteries. Ann Arbor Commandery then escorted the Detroit commanderies to the depot. The Grand Commandery of Kansas left on the late train Sunday night for their home.