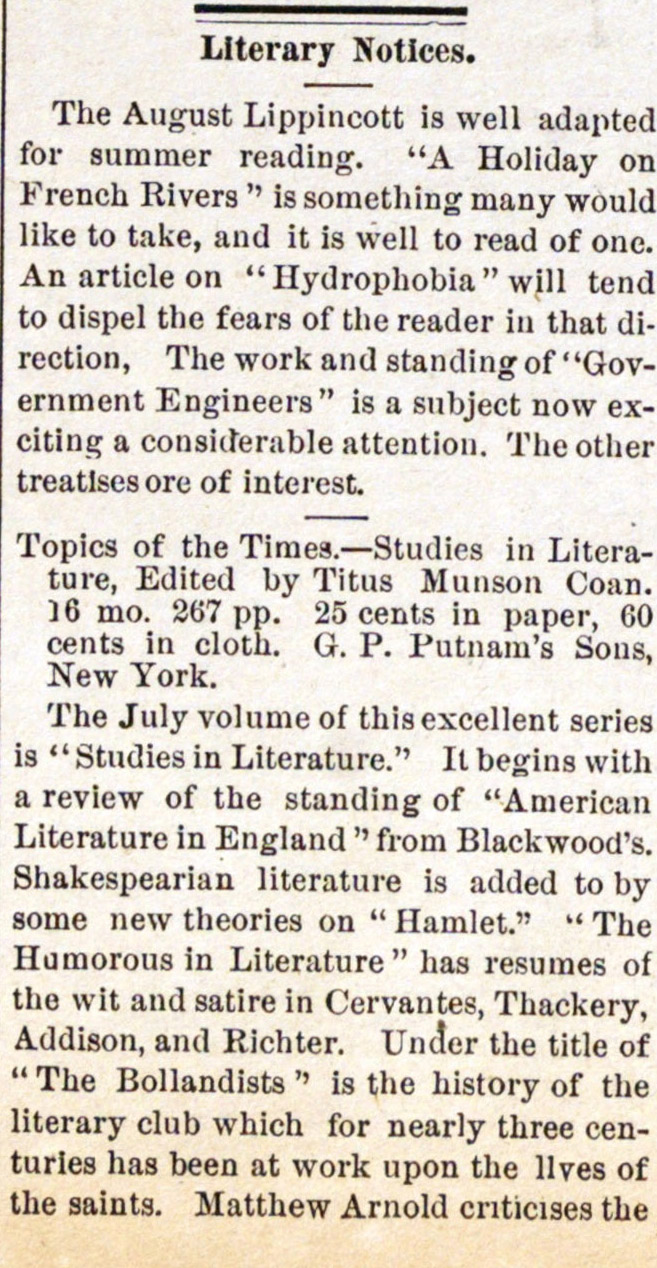 Literary Notices. The August Lippincott is well adapted for summer reading. "A Holiday on French Rivers '' is somc thing many would like to take, and it is well to read of one. An article on " Hydrophobia " will tend to dispel tlie fears of the reader in that direction, The work and standing of "Government Engineers" is a subject now exciting a considerable atteution. The other treatisesore of interest. Topics of the Time.- Studies in Literature, Edited by Titus Munson Coan. 16 mo. 267 pp. 25 cents in paper, 60 cents in cloth. G. P. Putnam's Sons, New York. The July volume of this excellent series s "Studies in Literature.'' It begins with a review of the standing of "American jiterature in England " from Blackwood's. Shakespearian literature is added to by soine new theories on " Hamlet." " The rlumorous in Literature" has resumes of ho wit and satire in Cervantes, Thackery, Addison, and Richter. Under the title of ' The Bollandists '' is the history of the iterary club which for nearly three cenuries lias been at work upon the llves of he saints. Matthew Arnold cnticises the , new revisión in 'Tsaiah of Jeruzalem " ; and the volume isconcluded with a chapter on the "Unknown Public." [ Reading of Books: lts Pleasures, Profits, and Perils, bv Charles F. Tliwing, 170 pp. cloth, $1,25. Lee & Shepard,"Boston. Of the 125,000 volumes published every year very few are worth reading and a still smaller number are worth thebuying. Our reading to be profitable must have an alm as well as a system, so in the reading of many books it is well occasionally to pause and gather the ideas of some scholar about books in general : what are the best to be read and what is the best way to read them. Such a useful volume is the one before us, li lied with practical ideas on literature in its relation to books. The advantages of reading biography, hiatory, travel, fiction, historical iiction, poetry, religious books, books of literature, language, philosophy, science and the fine arts; all these are set forth, and the whole is concluded with a chapter on "Forniinii a Library," and an Appendix of books of marlt. The North American Review for August has a very spirited discussion of the subject of " Moral Instruction in the Public Schools," by the Rev. R. Heber Newton. Henry D. Lloyd exposes the tricks and frauds of speculation in grain. "Woman in Politics," byex-Surgeon-General Win. A. Hammond, is a caustic discussion of certain facts of nervous organizution which in his opinión render the female sex unfitted for participaron in public affaire. Hon. Francis A. Walker reviews " Henry George's Social Fallacies." criticizing in particular his doctrines regai-ding landtenureand rent. Theevilsresultliigfrom "OudeMethodsof Legislation," both national and State, are pointed out by Simon Sterne, who advocates the adoption of certain rules of legislative procedure. Chas. F. Wingate writes of " The Unsanitary Homes of the Rich," and there is a joint discussion of " Science and Prayer," by President Galusha Anderson and Thaddeus B. Wakemau. Published at 30 Lafayette Place, New York, and for sale by booksellers generally.