Married In A Great Hurry 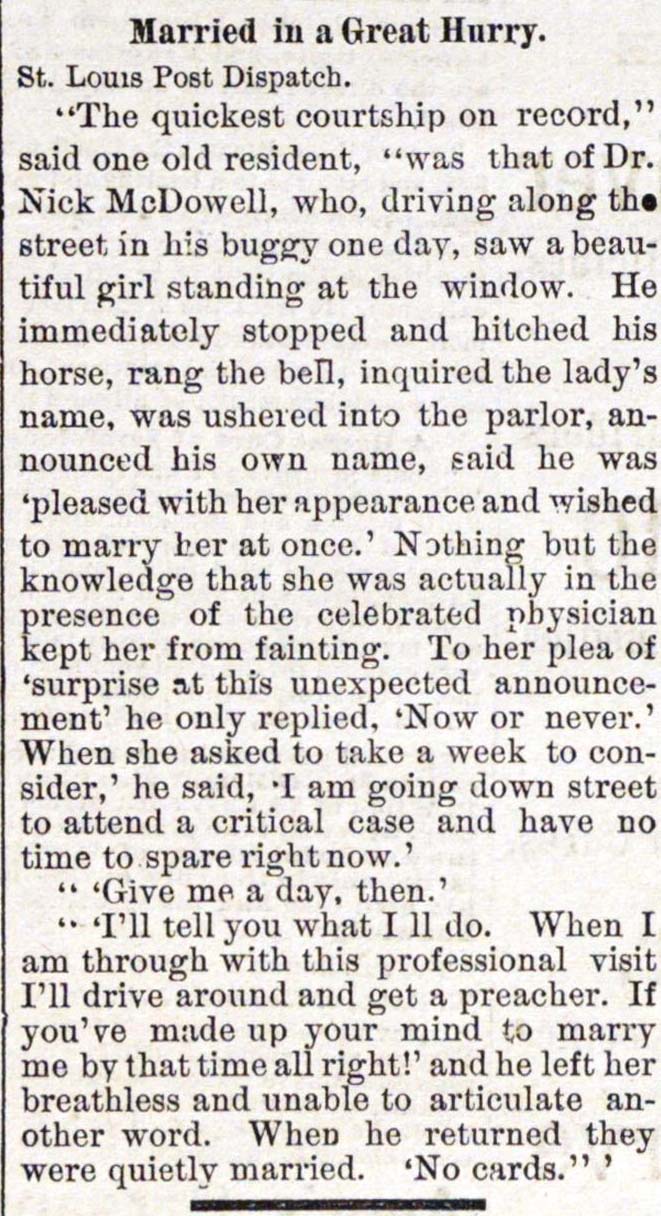 8t. Louis Po6t Dispatch. "The quickest courtship on record," said one old resident, "was that of Dr. Nick Moüowell, who, driving along th street n his buggy one day, saw abcautiful girl standing at the window. He immediately stopped and hitched his horse, rang the beu, inquired the lady's name, was usheied into the parlor, announced his own name, said he was 'pleased with her fippearance and wished to marry her at once.' Nothing but the knowledge that she was actually in the presence of the celebrated pbysician kept her from fainting. To her plea of 'surprise at this unexpected announcement' he only replied, 'Now or never.' When she asked to take a week to oonsider,' he said, -I am goiug down street to attend a critical case and have no time to spare right now.' " 'Give me a day, then.' ' Til teil you what I 11 do. When I am through with this professional visit I'll drive around and get a preacher. If you've made up j'our mind to marry me by that time all right!' and he left her breathless and unable to articulate another word. WheD ho returned they were quietlv married. 'No carda." ' The deail weights which many of ns are iorccd to carry through life, the things for which we are obliged to toil and study and think, and which yield us no return, are enough to exhaust the vitality of the best of us, and to leave us but little time or energy for enjoyment or the bestowal of happiness upon others. Inductivo rcasoning - Mr. Williana Doodle: "Yes, Miss Frost, 1 alway wear gloves at night; they make ono's hands so soft." Miss Frost: "Ah! And