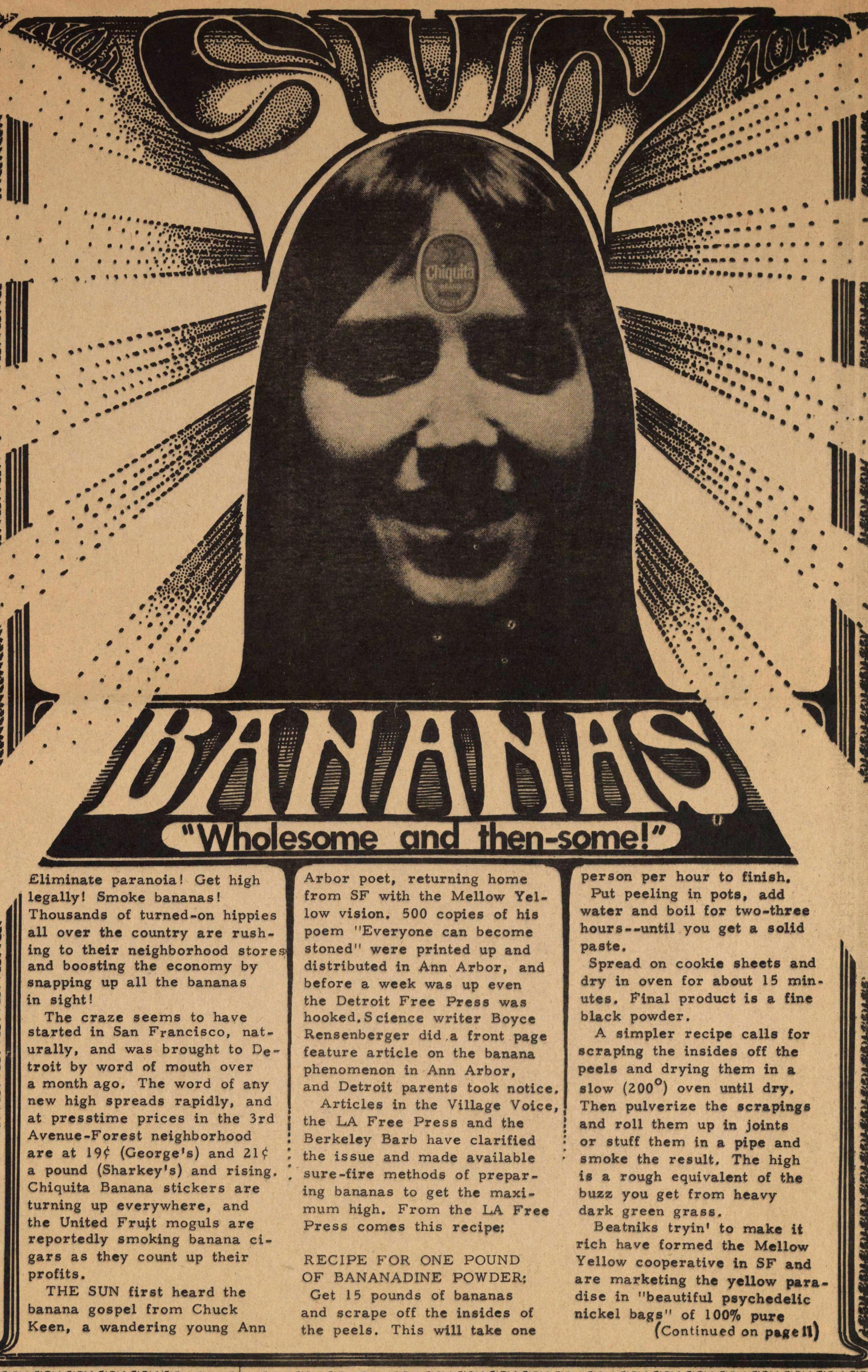 Thousands of turned-on hippies all over the country are rushing to their neighborhood stores and boosting the economy by snapping up all the bananas in sight!

The craze seems to have started in San Francisco, naturally, and was brought to Detroit by word of mouth over a month ago. The word of any new high spreads rapidly, and at presstime prices in the 3rd Avenue-Forest neighborhood are at 19c (George's) and 21c a pound (Sharkey's) and rising. Chiquita Banana stickers are turning up everywhere, and the United Fruit moguls are reportedly smoking banana cigars as they count up their profits.

THE SUN first heard the banana gospel from Chuck Keen, a wandering young Ann Arbor poet, returning home from SF with the Mellow Yellow vision. 500 copies of his poem "Everyone can become stoned" were printed up and distributed in Ann Arbor, and before a week was up even the Detroit Free Press was hooked. Science writer Boyce Rensenberger did a front page feature article on the banana phenomenon in Ann Arbor, and Detroit parents took notice.

Articles in the Village Voice, the LA Free Press and the Berkeley Barb have clarified the issue and made available sure-fire methods of preparing bananas to get the maximum high. From the LA Free Press comes this recipe:

RECIPE FOR ONE POUND OF BANANADINE POWDER;

Get 15 pounds of bananas and scrape off the insides of the peels. This will take one person per hour to finish.

Put peeling in pots, add water and boil for two-three hours--until you get a solid paste.

Spread on cookie sheets and dry in oven for about 15 minutes. Final product is a fine black powder.

A simpler recipe calls for scraping the insides off the peels and drying them in a slow (200) oven until dry.

Then pulverize the scrapings and roll them up in joints or stuff them in a pipe and smoke the result. The high is a rough equivalent of the buzz you get from heavy dark green grass.