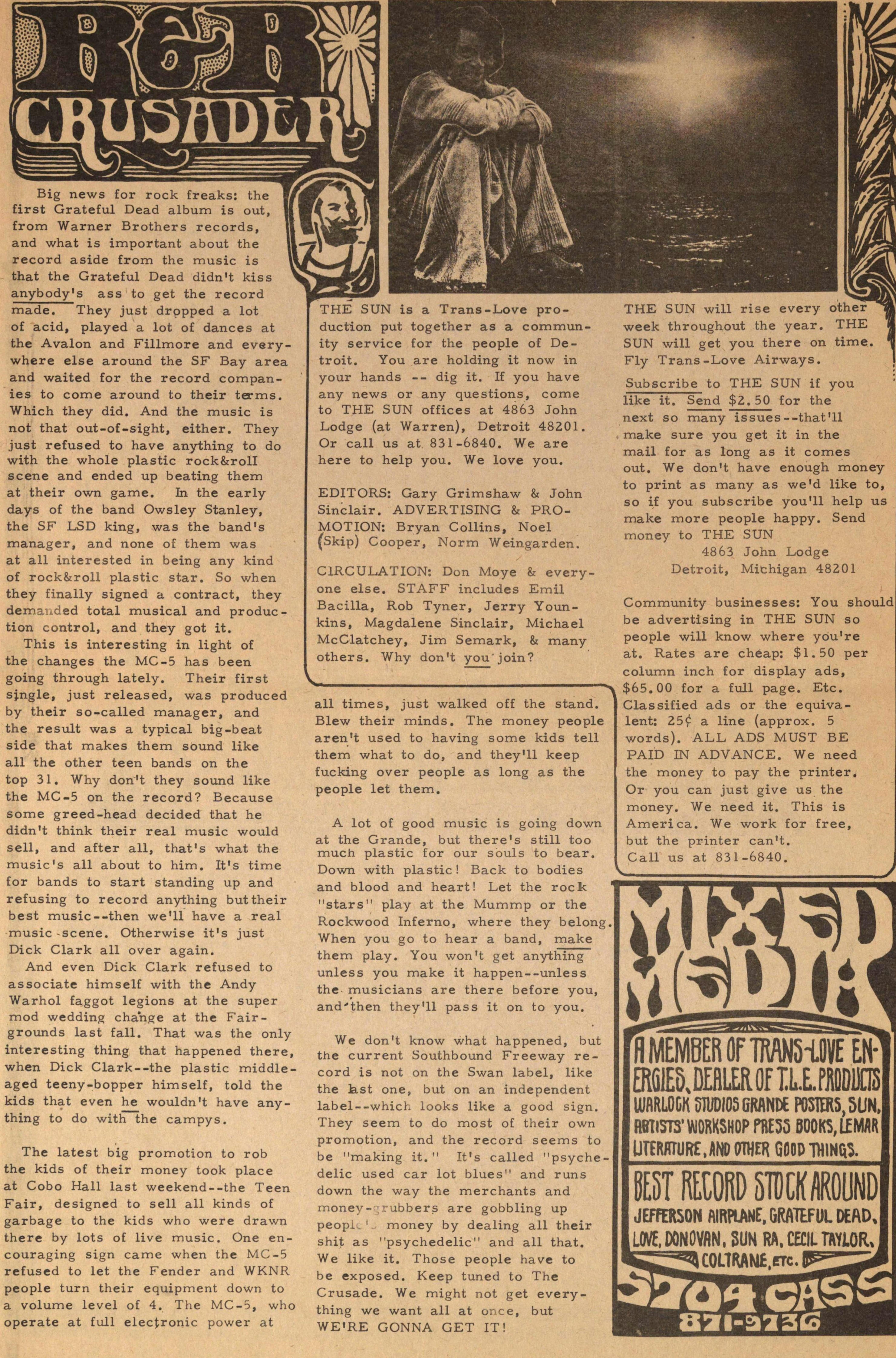 Big news for rock freaks: the first Grateful Dead album is out, from Warner Brothers records, and what is important about the record aside from the music is that the Grateful Dead didn't kiss anybody's ass to get the record made. They just dropped a lot of acid, played a lot of dances at the Avalon and Fillmore and everywhere else around the SF Bay area and waited for the record companies to come around to their terms. Which they did. And the music is not that out-of-sight, either. They just refused to have anything to do with the whole plastic rock&roll scene and ended up beating them at their own game. In the early days of the band Owsley Stanley, the SF LSD king, was the band's manager, and none of them was at all interested in being any kind of rock&roll plastic star. So when they finally signed a contract, they demanded total musical and production control, and they got it. This is interesting in light of the changes the MC -5 has been going through lately. Their first single, just released, was produced by their so-called manager, and the result was a typical big-beat side that makes them sound like all the other teen bands on the top 31. Why don't they sound like the MC-5 on the record? Because some greed-head decided that he didn't think their real music would sell, and after all, that's what the music's all about to him. It's time for bands to start standing up and refusing to record anything but their best music--then we'll have a real music scene. Otherwise it's just Dick Clark all over again.

And even Dick Clark refused to associate himself with the Andy Warhol faggot legions at the super mod wedding change at the Fairgrounds last fall. That was the only interesting thing that happened there, when Dick Clark--the plastic middle-aged teeny-bopper himself, told the kids that even he wouldn't have anything to do with the campys.

The latest big promotion to rob the kids of their money took place at Cobo Hall last weekend--the Teen Fair, designed to sell all kinds of garbage to the kids who were drawn there by lots of live music. One encouraging sign came when the MC-5 refused to let the Fender and WKNR people turn their equipment down to a volume level of 4. The MC-5, who operate at full electronic power at all times, just walked off the stand. Blew their minds. The money people aren't used to having some kids tell them what to do, and they'll keep fucking over people as long as the people let them.

A lot of good music is going down at the Grande, but there's still too much plastic for our souls to bear. Down with plastic! Back to bodies and blood and heart! Let the rock "stars" play at the Mummp or the Rockwood Inferno, where they belong. When you go to hear a band, make them play. You won 't get anything unless you make it happen--unless the musicians are there before you, and then they'll pass it on to you.

We don't know what happened, but the current Southbound Freeway record is not on the Swan label, like the last one, but on an independent label-which looks like a good sign. They seem to do most of their own promotion, and the record seems to be "making it." It's called "psychedelic used car lot blues" and runs down the way the merchants and money-grubbers are gobbling up people's money by dealing all their shit as "psychedelic" and all that. We like it. Those people have to be exposed. Keep tuned to The Crusade. We might not get everything we want all at once, but WE'RE GONNA GET IT!

THE SUN is a Trans-Love production put together as a community service for the people of Detroit. You are holding it now in your hands -- dig it. If you have any news or any questions, come to THE SUN offices at 4863 John Lodge (at Warren), Detroit 48201. Or call us at 831-6840. We are here to help you. We love you.

THE SUN will rise every other week throughout the year. THE SUN will get you there on time. Fly Trans-Love Airways.

Subscribe to THE SUN if you like it. Send $2.50 for the next so many issues --that'll make sure you get it in the mail for as long as it comes out. We don't have enough money to print as many as we'd like to, so if you subscribe you'll help us make more people happy. Send money to THE SUN

Community businesses: You should be advertising in THE SUN so people will know where you're at. Rates are cheap: $1.50 per column inch for display ads, $65.00 for a full page. Etc. Classified ads or the equivalent: 25c a line (approx. 5 words). ALL ADS MUST BE PAID IN ADVANCE. We need the money to pay the printer. Or you can just give us the money. We need it. This is America. We work for free, but the printer can't. Call us at 831-6840.