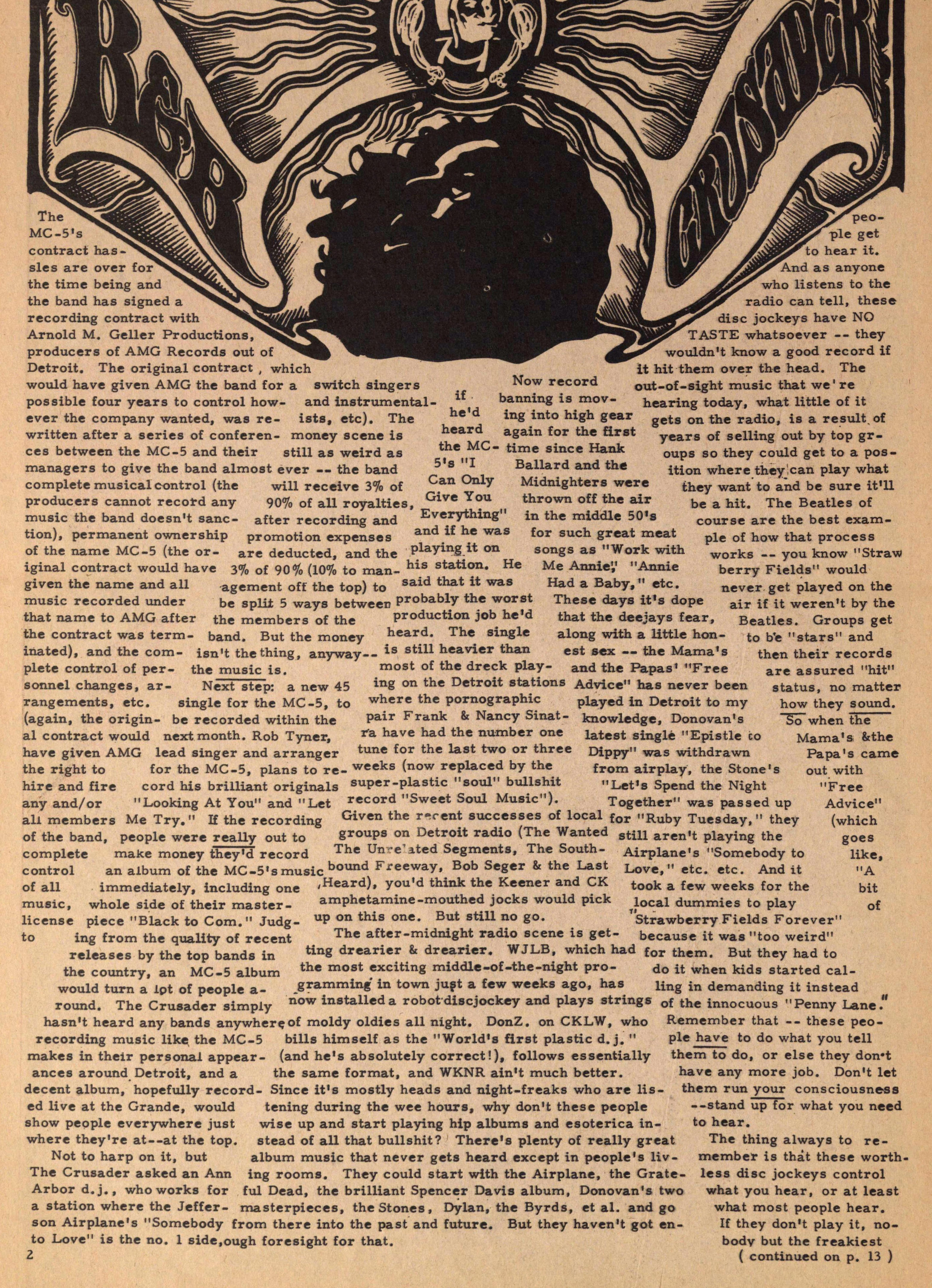 Th MC-5's contract has-sles are over for the time being and the band has signed a recording contract with Arnold M. Geller Productions, producers of AMG Records out of Detroit. The original contract, which would have given AMG the band for a possible four years to control however the company wanted, was rewritten after a series of conferences between the MC-5 and their managers to give the band almost complete musical control (the producers cannot record any music the band doesn't sanction), permanent ownership of the name MC-5 (the original contract would have given the name and all music recorded under that name to AMG after the contract was terminated), and the complete control of personnel changes, rangements, etc. (again, the original contract would have given AMG the right to hire and fire any and/or all members of the band, complete control of all music, license to switch singers and instrumentalists, etc). The money scene is still as weird as ever -- the band will receive 3% of 90% of all royalties, after recording and promotion expenses are deducted, and the 3% of 90% (10% to management off the top) to be split 5 ways between the members of the band. But the money isn't the thing, anyway - the music is.

Next step: a new 45 single for the MC -5, to be recorded within the next month. Rob Tyner, lead singer and arranger for the MC -5, plans to record his brilliant originals "Looking At You" and "Let Me Try." If the recording people were really out to make money they'd record an album of the MC-5's music immediately, including one whole side of their masterpiece "Black to Com." Judging from the quality of recent releases by the top bands in the country, an MC-5 album would turn a lot of people around. The Crusader simply hasn't heard any bands anywhere recording music like the MC-5 makes in their personal appearances around Detroit, and a decent album, hopefully recorded live at the Grande, would show people everywhere just where they're at - at the top. Not to harp on it, but The Crusader asked an Ann Arbor d.j., who works for a station where the Jefferson Airplane's "Somebody to Love" is the no. 1 side, if he'd heard the MC-5's "I Can Only Give You Everything" and if he was playing it on his station. He said that it was probably the worst production job he'd heard. The single is still heavier than most of the dreck playing on the Detroit stations where the pornographic pair Frank & Nancy Sinatra have had the number one tune tor the last two or three weeks (now replaced by the super-plastic "soul" bullshit record "Sweet Soul Music". Given the recent successes of local groups on Detroit radio (The Wanted The Unrelated Segments, The Southbound Freeway, Bob Seger & the Last Heard), you'd think the Keener and CK amphetamine-mouthed jocks would pick up on this one. But still no go.

The after-midnight radio scene is getting drearier & drearier. WJLB, which had the most exciting middle-of-the-night programming in town just a few weeks ago, has now installed robot disc jockey and plays strings of moldy oldies all night. DonZ. on CKLW, who bills himself as the "World's first plastic d. j." (and he's absolutely correct!), follows essentially the same format, and WKNR ain't much better. Since it's mostly heads and night-freaks who are listening during the wee hours, why don't these people wise up and start playing hip albums and esoterica instead of all that bullshit? There's plenty of really great album music that never gets heard except in people's living rooms. They could start with the Airplane, the Grateful Dead, the brilliant Spencer Davis album, Donovan's two masterpieces, the Stones, Dylan, the Byrds, et al. and go from there into the past and future. But they haven 't got enough foresight for that.

Now record banning is moving into high gear again for the first time since Hank Ballard and the Midnighters were thrown off the air in the middle 50's for such great meat songs as "Work with Me Annie", "Annie Had a Baby," etc. These days it's dope that the deejays fear, along with a little honest sex - the Mama's and the Papas' "Free Advice" has never been played in Detroit to my knowledge, Dono van 's latest single "Epistle to Dippy" was withdrawn from airplay, the Stone's "Let's Spend the Night Together" was passed up for "Ruby Tuesday, " they still aren 't playing the Airplane's "Somebody to Love, " etc. etc. And it took a few weeks for the local dummies to play "Strawberry Fields Forever" because it was "too weird" for them. But they had to do it when kids started calling in demanding it instead of the innocuous "Penny Lane." Remember that - these people have to do what you tell them to do, or else they don't have any more job. Don't let them run your consciousness - stand up for what you need to hear.

The thing always to remember is that these worthless disc jockeys control what you hear, or at least what most people hear. If they don't play it, nobody but the freakiest people get to hear it. And as anyone who listens to the radio can tell, these disc jockeys have NO TASTE whatsoever - they wouldn't know a good record if it hit them over the head. The out-of-sight music that we 're hearing today, what little of it gets on the radio, is a result of years of selling out by top groups so they could get to a position where they can play what they want to and be sure it'll be a hit. The Beatles of course are the best example of how that process works -- you know "Straw berry Fields" would never get played on the air if it weren't by the Beatles. Groups get to be "stars" and then their records are assured "hit" status, no matter how they sound. So when the Mama's & the Papa's came out with "Free Advice" (which goes like, "A bit of free advice / I'll tell it to you nice / If you got some habits / Some people won't allow / Be cool / Be clean / If you know what I mean," etc.) the DJs, scared away by the obvious head references in the song, had to make the other side, a vague parody of the Shirelles' old hit "Dedicated to the One I Love," a hit because it was the new record by the Mamas and the Papas and one side of their new record had to be a hit. You dig? I'll try to get more into "the mechanics of social exploitation, " as Semark calls it, in the next few CRUSADER columns.

One last word on DJs for this time: The 1st time The Crusader heard the amazing new Spencer Davis single "I'm a Man," which is one of the most together arrangements yet heard, some stupid Keener cutie comes on after the record' s over with, "Well, howd'ya like that for goof-off music?" And then slipped on the 5 Americans, a little more "serious" stuff to keep all the kids' minds sealed shut. But they won't last much longer - wait and see. We might not get everything all at once, BUT WE'RE GONNA GET IT!