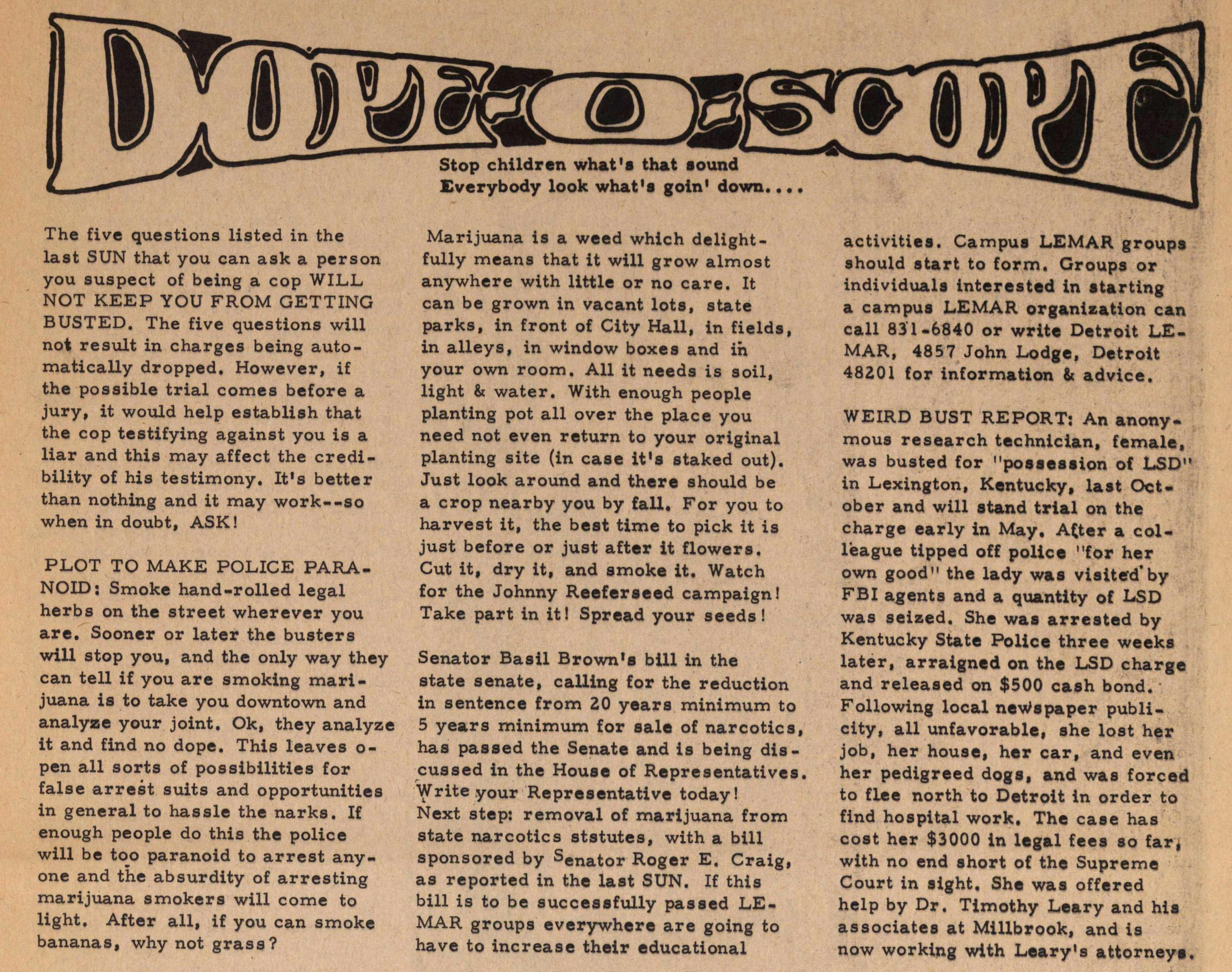 Stop children what's that sound Everybody look what's goin' down. . . . The five questions listed in the last SUN that you can ask a person you suspect of being a cop WILL NOT KEEP YOU FROM GETTING BUSTED. The five questions will not result in charges being automatically dropped. However, if the possible trial comes before a jury, it would help establish that the cop testifying against you is a liar and this may affect the credibility of his testimony. It's better than nothing and it may work--so when in doubt, ASK!

PLOT TO MAKE POLICE PARANOID: Smoke hand-rolled legal herbs on the street wherever you are. Sooner or later the busters will stop you, and the only way they can tell if you are smoking marijuana is to take you downtown and analyze your joint. Ok, they analyze it and find no dope. This leaves open all sorts of possibilities for false arrest suits and opportunities in general to hassle the narks. If enough people do this the police will be too paranoid to arrest anyone and the absurdity of arresting marijuana smokers will come to light. After all, if you can smoke bananas, why not grass?

Marijuana is a weed which delightfully means that it will grow almost anywhere with little or no care. It can be grown in vacant lots, state parks, in front of City Hall, in fields, in alleys, in window boxes and in your own room. All it needs is soil, light & water. With enough people planting pot all over the place you need not even return to your original planting site (in case it's staked out). Just look around and there should be a crop nearby you by fall. For you to harvest it, the best time to pick it is just before or just after it flowers. Cut it, dry it, and smoke it. Watch for the Johnny Reeferseed campaign! Take part in it! Spread your seeds! Senator Basil Brown's bill in the state senate, calling for the reduction in sentence from 20 years maximum to 5 years minimum for sale of narcotics, has passed the Senate and is being discussed in the House of Representatives. Write your Representative today! Next step: removal of marijuana from state narcotics statutes, with a bill sponsored by Senator Roger E. Craig, as reported in the laat SUN. If this bill is to be successfully passed LEMAR groups everywhere are going to have to increase their educational activities.

WEIRD BUST REPORT: An anonymous research technician, female, was busted for "possession of LSD" in Lexington, Kentucky, last October and will stand trial on the charge early in May. After a colleague tipped off police "for her own good" the lady was visited by FBI agents and a quantity of LSD was seized. She was arrested by Kentucky State Police three weeks later, arraigned on the LSD charge and released on $500 cash bond. Following local newspaper publicity, all unfavorable, she lost her job, her house, her car, and even her pedigreed dogs, and was forced to flee north to Detroit in order to find hospital work. The case has cost her $3000 in legal fees so far, with no end short of the Supreme Court in sight. She was offered help by Dr. Timothy Leary and his associates at Millbrook, and is now working with Leary's attorneys.