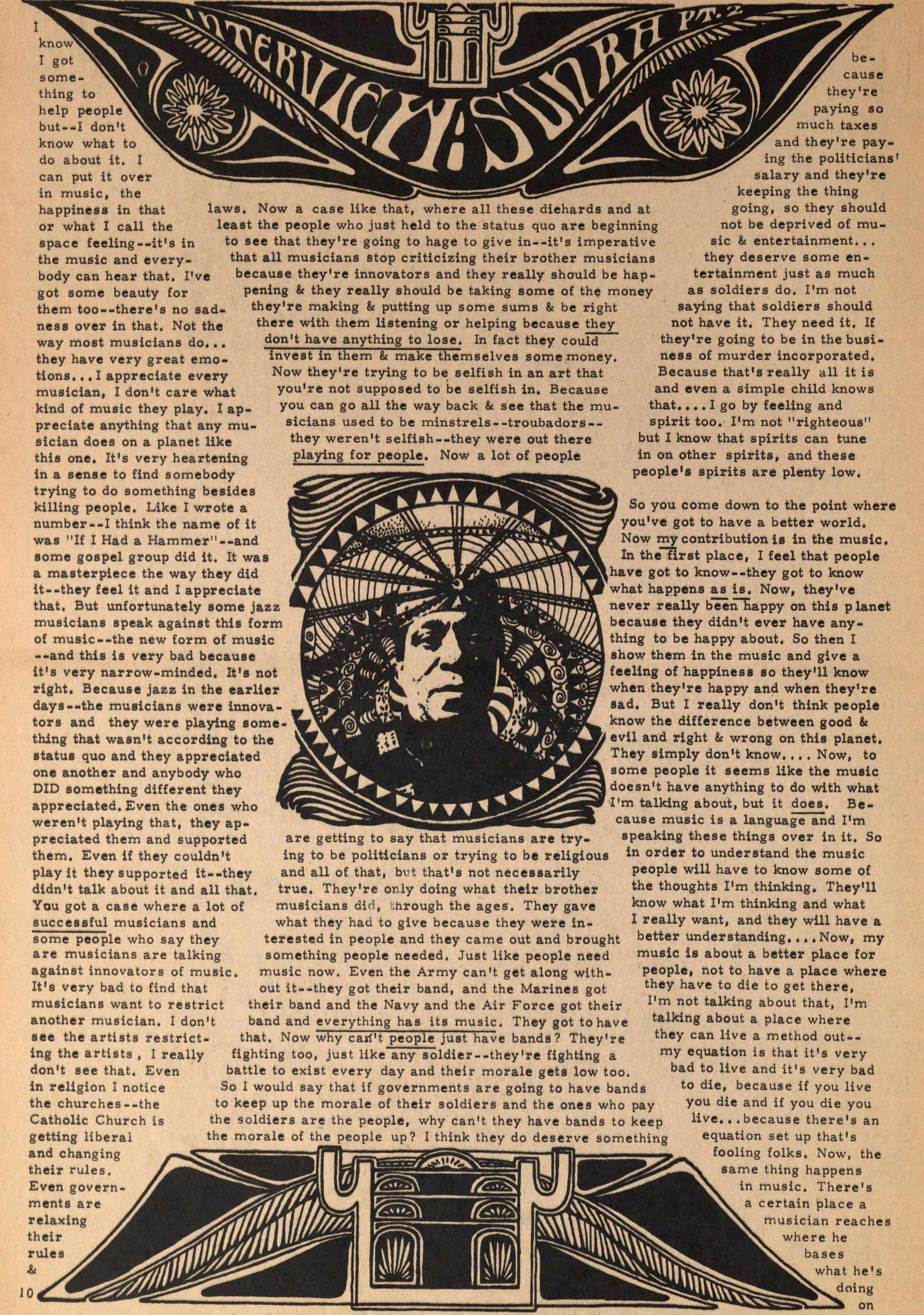 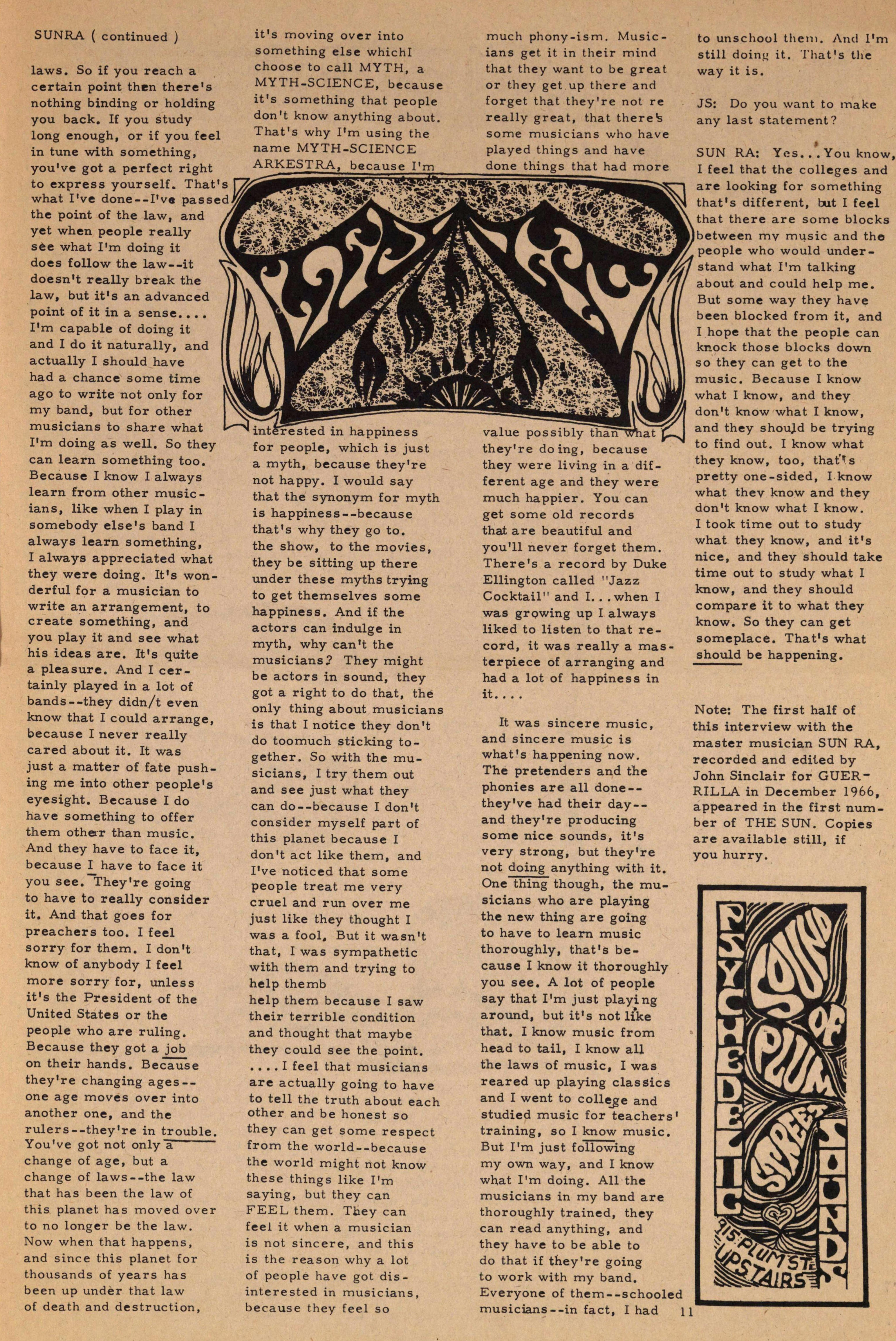 I got something to help people but--I don't know what to do about it. I can put it over in music, the happiness in that or what I call the space feeling--it's in the music and everybody can hear that. I've got some beauty for them too--there's no sadness over in that. Not the way most musicians do. . . they have very great emotions. . . I appreciate every musician, I don't care what kind of music they play. I appreciate anything that any musician does on a planet like this one. It's very heartening in a sense to find somebody trying to do something besides killing people. Like I wrote a number--I think the name of it was "If I Had a Hammer" --and some gospel group did it. It was a masterpiece the way they did it--they feel it and I appreciate that. But unfortunately some jazz musicians speak against this form of music--the new form of music --and this is very bad because it's very narrow-minded. It's not right. Because jazz in the earlier days--the musicians were innovators and they were playing thing that wasn't according to the status quo and they appreciated one another and anybody who DID something different they appreciated. Even the ones who weren't playing that, they appreciated them and supported them. Even if they couldn't play it they supported it--they didn't talk about it and all that. You got a case where a lot of successful musicians and some people who say they are musicians are talking against innovators of music. It's very bad to find that musicians want to restrict another musician. I don't see the artists restricting the artists . I really don't see that. Even in religion I notice the churches--the Catholic Church is getting liberal and changing their rules. Even governments are relaxing their rules & laws. Now a case like that, where all these diehards and at least the people who just held to the status quo are beginning to see that they're going to have to give in--it's imperative that all musicians stop criticizing their brother musicians because they're innovators and they really should be happening & they really should be taking some of the money they're making & putting up some sums & be right there with them listening or helping because they don't have anything to lose. In fact they could invest in them & make themselves some money. Now they're trying to be selfish in an art that you're not supposed to be selfish in. Because you can go all the way back & see that the musicians used to be minstrels--troubadors--they weren't selfish--they were out there playing for people. Now a lot of people are getting to say that musicians are trying to be politicians or trying to be religious and all of that, but that's not necessarily true. They're only doing what their brother musicians did, through the ages. They gave what they had to give because they were interested in people and they came out and brought something people needed. Just like people need music now. Even the Army can't get along without it--they got their band, and the Marines got their band and the Navy and the Air Force got their band and everything has its music. They got to have that. Now why can't people just have bands? They're fighting too, just like any soldier--they're fighting a battle to exist every day and their morale gets low too. So I would say that if governments are going to have bands to keep up the morale of their soldiers and the ones who pay the soldiers are the people, why can't they have bands to keep the morale of the people up? I think they do deserve something because they're paying so much taxes and they're paying the politicians' salary and they're keeping the thing going, so they should not be deprived of music & entertainment. . . they deserve some entertainment just as much as soldiers do. I'm not saying that soldiers should not have it. They need it. If they're going to be in the business of murder incorporated. Because that's really all it is and even a simple child knows that.... I go by feeling and spirit too. I'm not "righteous" but I know that spirits can tune in on other spirits, and these people's spirits are plenty low.

So you come down to the point where you've got to have a better world. Now my contribution is in the music. In the first place, I feel that people have got to know - they got to know what happens as is. Now, they've never really been happy on this planet because they didn't ever have anything to be happy about. So then I show them in the music and give a feeling of happiness so they'll know when they're happy and when they're sad. But I really don't think people know the difference between good & evil and right & wrong on this planet. They simply don't know. . . . Now, to some people it seems like the music doesn't have anything to do with what I'm talking about, but it does. Because music is a language and I'm speaking these things over in it. So in order to understand the music people will have to know some of the thoughts I'm thinking. They'll know what I'm thinking and what I really want, and they will have a better understanding. . . . Now, my music is about a better place for people, not to have a place where they have to die to get there, I'm not talking about that, I'm talking about a place where they can live a method out--my equation is that it's very bad to live and it's very bad to die, because if you live you die and if you die you live. . . because there's an equation set up that's fooling folks. Now, the same thing happens in music. There's a certain place a musician reaches where he bases what he's doing on

laws. So if you reach a certain point then there's nothing binding or holding you back. If you study long enough, or if you feel in tune with something, you've got a perfect right to express yourself. That's what I've done--I've passed the point of the law, and yet when people really see what I'm doing it does follow the law--it doesn't really break the law, but it's an advanced point of it in a sense. . . . I'm capable of doing it and I do it naturally, and actually I should have had a chance some time ago to write not only for my band, but for other musicians to share what I'm doing as well. So they can learn something too. Because I know I always learn from other musicians, like when I play in somebody else's band I always learn something, I always appreciated what they were doing. It's wonderful for a musician to write an arrangement, to create something, and you play it and see what his ideas are. It's quite a pleasure. And I certainly played in a lot of bands --they didn't even know that I could arrange, because I never really cared about it. It was just a matter of fate pushing me into other people's eyesight. Because I do have something to offer them other than music. And they have to face it, because I have to face it you see. They're going to have to really consider it. And that goes for preachers too. I feel sorry for them. I don 't know of anybody I feel more sorry for, unless it's the President of the United States or the people who are ruling. Because they got a job on their hands. Because they're changing ages-one age moves over into another one, and the rulers --they're in trouble. You've got not only a change of age, but a change of laws--the law that has been the law of this planet has moved over to no longer be the law. Now when that happens, and since this planet for thousands of years has been up under that law of death and destruction, it 's moving over into something else which l choose to cali MYTH, a MYTH-SCIENCE, because it's something that people don't know anything about. That's why I'm using the name MYTH-SCIENCE ARKESTRA, because I'm interested in happiness for people, which is just a myth, because they're not happy. I would say that the synonym for myth is happiness--because that's why they go to the show, to the movies, they be sitting up there under these myths trying to get themselves some happiness. And if the actors can indulge in myth, why can't the musicians? They might be actors in sound, they got a right to do that, the only thing about musicians is that I notice they don't do too much sticking together. So with the musicians, I try them out and see just what they can do--because I don't consider myself part of this planet because I don't act like them, and I've noticed that some people treat me very cruel and run over me just like they thought I was a fool, But it wasn't that, I was sympathetic with them and trying to help themb

help them because I saw their terrible condition and thought that maybe they could see the point..... I feel that musicians are actually going to have to tell the truth about each other and be honest so they can get some respect from the world--because the world might not know these things like I'm saying, but they can FEEL them. They can feel it when a musician is not sincere, and this is the reason why a lot of people have got disinterested in musicians, because they feel so much phony-ism. Musicians get it in their mind that they want to be great or they get up there and forget that they're not re really great, that there some musicians who have played things and have done things that had more value possibly than what they're doing, because they were living in a different age and they were much happier. You can get some old records that are beautiful and you'll never forget them. There's a record by Duke Ellington called "Jazz Cocktail" and I. . .when I was growing up I always liked to listen to that record, it was really a masterpiece of arranging and had a lot of happiness in it It was sincere music, and sincere music is what's happening now. The pretenders and the phonies are all done-they've had their day-and they're producing some nice sounds, it's very strong, but they're not doing anything with it. One thing though, the musicians who are playing the new thing are going to have to learn music thoroughly, that 's because I know it thoroughly you see. A lot of people say that I'm just playing around, but it's not like that. I know music from head to tail, I know all the laws of music, I was reared up playing classics and I went to college and studied music for teachers' training, so I know music. But I'm just following my own way, and I know what I'm doing. All the musicians in my band are thoroughly trained, they can read anything, and they have to be able to do that if they're going to work with my band. Everyone of them--schooled musicians--in fact, I had to unschool them. And I'm still doing it. That's the way it is.

JS: Do you want to make any last statement?

Note: The first half of this interview with the master musician SUN RA, recorded and edited by John Sinclair for GUERRILLA in December 1966, appeared in the first number of THE SUN. Copies are available still, if you hurry.