Jim Semark The Tooth Of Truth 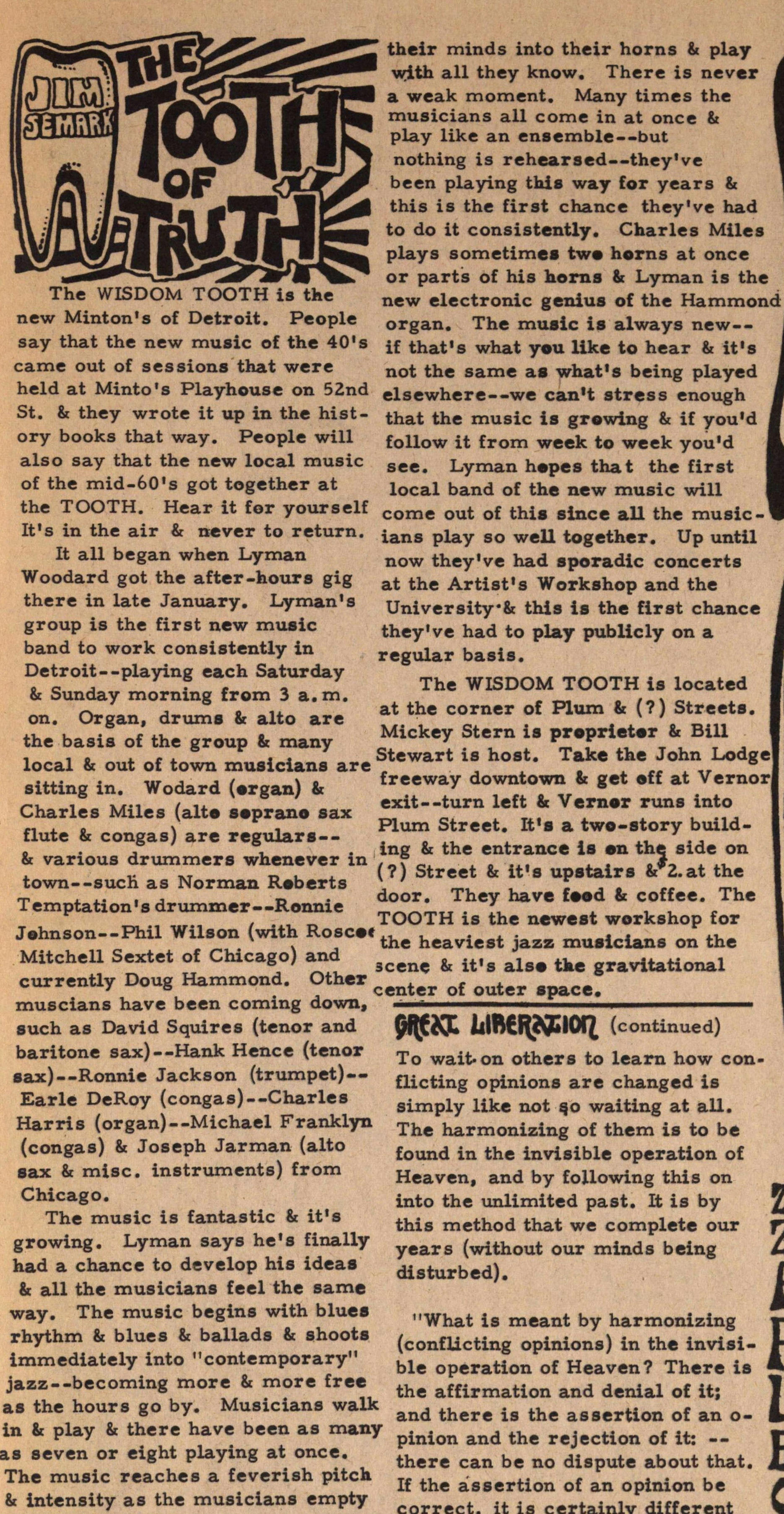 THE TOOTH OF TRUTH

The WISDOM TOOTH is the new Minton's of Detroit. People say that the new music of the 40's came out of sessions that were held at Minto's Playhouse on 52nd St. & they wrote it up in the history books that way. People will also say that the new local music of the mid-60's got together at the TOOTH. Hear it for yourself. It's in the air & never to return.

It all began when Lyman Woodard got the after-hours gig there in late January. Lyman 's group is the first new music band to work consistently in Detroit--playing each Saturday & Sunday morning from 3 a.m. on. Organ, drums & alto are the basis of the group & many local & out of town musicians are sitting in. Wodard (organ) & Charles Miles (alto soprano sax flute & congas) are regulars- - & various drummers whenever in town--such as Norman Roberts Temptation's drummer--Rennie Johnson--Phil Wilson (with Roscoe Mitchell Sextet of Chicago) and currently Doug Hammond. Other musicians have been coming down, such as David Squires (tenor and baritone sax)--Hank Henee (tenor sax)--Ronnie Jackson (trumpet)--Earle DeRoy (congas)--Charles Harris (organ)--Michael Franklyn (congas) & Joseph Jarman (alto sax & misc. instruments) from Chicago.

The music is fantastic & it's growing. Lyman says he's finally had a chance to develop his ideas & all the musicians feel the same way. The music begins with blues rhythm & blues & ballads & shoots immediately into "contemporary" jazz--becoming more & more free as the hours go by. Musicians walk in & play & there have been as many as seven or eight playing at once. The music reaches a feverish pitch & intensity as the musicians empty their minds into their horns & play with all they know. There is never a weak moment. Many times the musicians all come in at once & play like an ensemble--but nothing is rehearsed--they've been playing this way for years & this is the first chance they've had to do it consistently. Charles Miles plays sometime two horns at once or parts of his horns & Lyman is the new electronic genius of the Hammond organ. The music is always new--if that's what you like to hear & it's not the same as what 's being played elsewhere--we can't stress enough that the music is growing & if you'd follow it from week to week you'd see. Lyman hopes that the first local band of the new music will come out of this since all the musicians play so well together. Up until now they've had sporadic concerts at the Artist's Workshop and the University & this is the first chance they've had to play publicly on a regular basis.

The WISDOM TOOTH is located at the corner of Plum & (?) Streets. Mickey Stern is proprieter & Bill Stewart is host. Take the John Lodge freeway downtown & get off at Vernor exit--turn left & Vernor runs into Plum Street. It's a two-story building & the entrance is on the side on (?) Street & it's upstairs & $2 at the door. They have food & coffee. The TOOTH is the newest workshop for the heaviest jazz musicians on the scene & it's also the gravitational center of outer space.

To wait on others to learn how conflicting opinions are changed is simply like not so waiting at all.  The harmonizing of them is to be found in the invisible operation of Heaven, and by following this on into the unlimited past.  It is by this method that we complete our years (without our minds being disturbed).