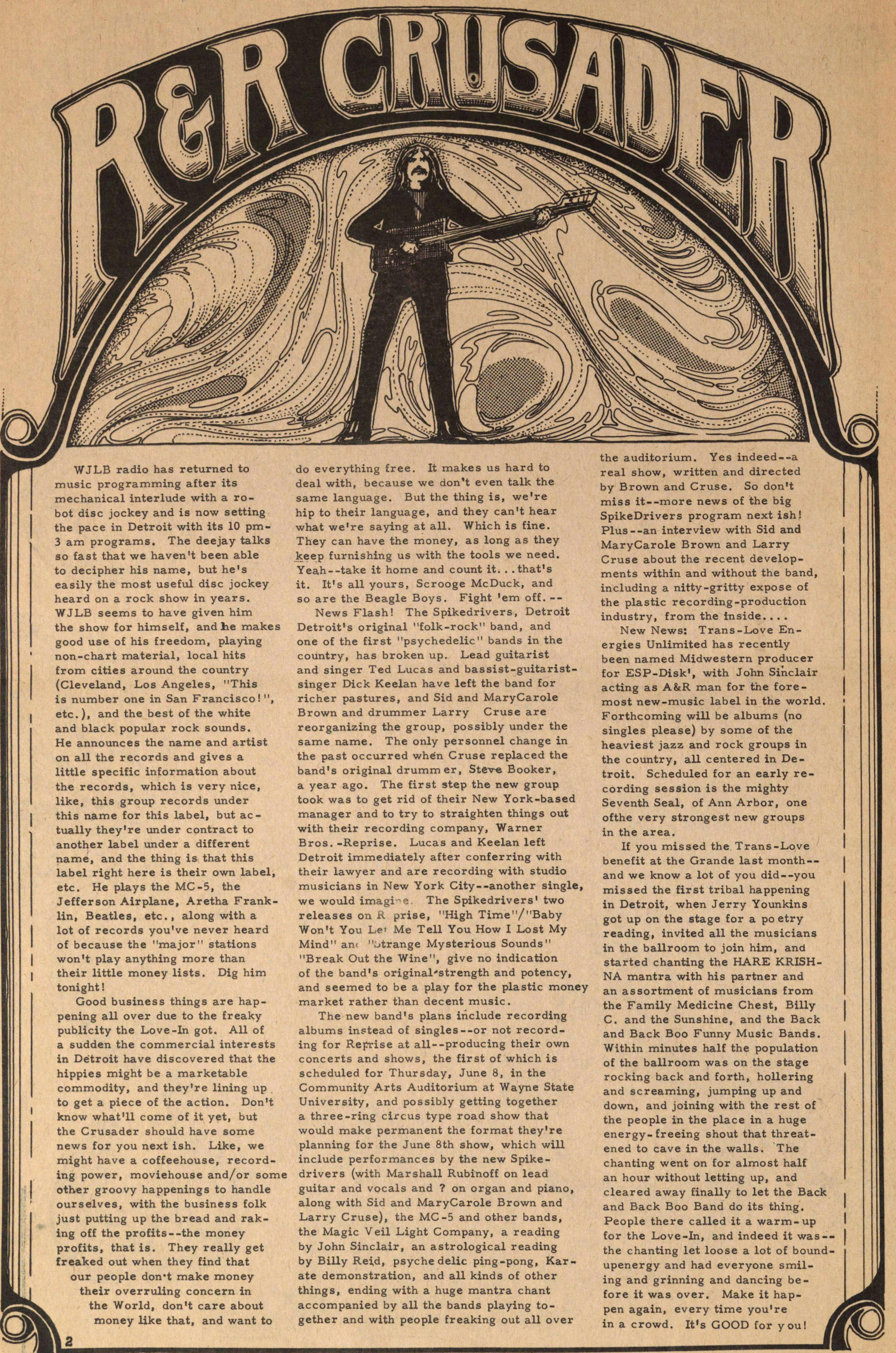 WJLB radio has returned to music programming after its mechanical interlude with a robot disc jockey and is now setting the pace in Detroit with its 10 pm - 3 am programs. The deejay talks so fast that we haven't been able to decipher his name, but he's easily the most useful disc jockey heard on a rock show in years. WJLB seems to have given him the show for himself, and he makes good use of his freedom, playing non-chart material, local hits from cities around the country (Cleveland, Los Angeles, "This is number one in San Francisco!", etc.), and the best of the white and black popular rock sounds. He announces the name and artist on all the records and gives a little specific information about the records, which is very nice, like, this group records under this name for this label, but actually they're under contract to another label under a different name, and the thing is that this label right here is their own label, etc. He plays the MC-5, the Jefferson Airplane, Aretha Franklin, Beatles, etc., along with a lot of records you've never heard of because the "major" stations won't play anything more than their little money lists. Dig him tonight!

Good business things are happening all over due to the freaky publicity the Love-In got. All of a sudden the commercial interests in Detroit have discovered that the hippies might be a marketable commodity, and they're lining up to get a piece of the action. Don't know what'll come of it yet, but the Crusader should have some news for you next ish. Like, we might have a coffeehouse, recording power, moviehouse and/or some other groovy happenings to handle ourselves, with the business folk just putting up the bread and raking off the profits -- the money profits, that is. They really get freaked out when they find that our people don't make money their overruling concern in the World, don't care about money like that, and want to do everything free. It makes us hard to deal with, because we don't even talk the same language. But the thing is, we're hip to their language, and they can't hear what we're saying at all. Which is fine. They can have the money, as long as they keep furnishing us with the tools we need. Yeah -- take it home and count it. . . that's it. It's all yours, Scrooge McDuck, and so are the Beagle Boys. Fight 'em off. --

News Flash! The Spikedrivers, Detroit Detroit's original "folk-rock" band, and one of the first "psychedelic" bands in the country, has broken up. Lead guitarist and singer Ted Lucas and bassist-guitarist-singer Dick Keelan have left the band for richer pastures, and Sid and MaryCarole Brown and drummer Larry Cruse are reorganizing the group, possibly under the same name. The only personnel change in the past occurred when Cruse replaced the band's original drummer, Steve Booker, a year ago. The first step the new group took was to get rid of their New York-based manager and to try to straighten things out with their recording company, Warner Bros. -Reprise. Lucas and Keelan left Detroit immediately after conferring with their lawyer and are recording with studio musicians in New York City --another single, we would imagine. The Spikedrivers two releases on Reprise, "High Time"/"Baby Won't You Let Me Tell You How I Lost My Mind" and "Strange Mysterious Sounds" "Break Out the Wine", give no indication of the band's original strength and potency, and seemed to be a play for the plastic money market rather than decent music.

The new band's plans include recording albums instead of singles -- or not recording for Reprise at all -- producing their own concerts and shows, the first of which is scheduled for Thursday, June 8, in the Community Arts Auditorium at Wayne State University, and possibly getting together a three-ring circus type road show that would make permanent the format they're planning for the June 8th show, which will include performances by the new Spikedrivers (with Marshall Rubinoff on lead guitar and vocals and ? on organ and piano, along with Sid and MaryCarole Brown and Larry Cruse), the MC-5 and other bands, the Magic Veil Light Company, a reading by John Sinclair, an astrological reading by Billy Reid, psychedelic ping-pong, Karate demonstration, and all kinds of other things, ending with a huge mantra chant accompanied by all the bands playing together and with people freaking out all over the auditorium. Yes indeed -- a real show, written and directed by Brown and Cruse. So don't miss it -- more news of the big SpikeDrivers program next ish! Plus -- an interview with Sid and MaryCarole Brown and Larry Cruse about the recent developments within and without the band, including a nitty-gritty exposé of the plastic recording-production industry, from the inside. . . .

New News: Trans-Love Energies Unlimited has recently been named Midwestern producer for ESP-Disk', with John Sinclair acting as A&R man for the foremost new-music label in the world. Forthcoming will be albums (no singles please) by some of the heaviest jazz and rock groups in the country, all centered in Detroit. Scheduled for an early recording session is the mighty Seventh Seal, of Ann Arbor, one of the very strongest new groups in the area.

If you missed the Trans-Love benefit at the Grande last month -- and we know a lot of you did -- you missed the first tribal happening in Detroit, when Jerry Younkins got up on the stage for a poetry reading, invited all the musicians in the ballroom to join him, and started chanting the HARE KRISHNA mantra with his partner and an assortment of musicians from the Family Medicine Chest, Billy C. and the Sunshine, and the Back and Back Boo Funny Music Bands. Within minutes half the population of the ballroom was on the stage rocking back and forth, hollering and screaming, jumping up and down, and joining with the rest of the people in the place in a huge freeing shout that threatened to cave in the walls. The chanting went on for almost half an hour without letting up, and cleared away finally to let the Back and Back Boo Band do its thing. People there called it a warm-up for the Love-In, and indeed it was -- the chanting let loose a lot of bound-up energy and had everyone smiling and grinning and dancing before it was over. Make it happen again, every time you're in a crowd. It's GOOD for you!