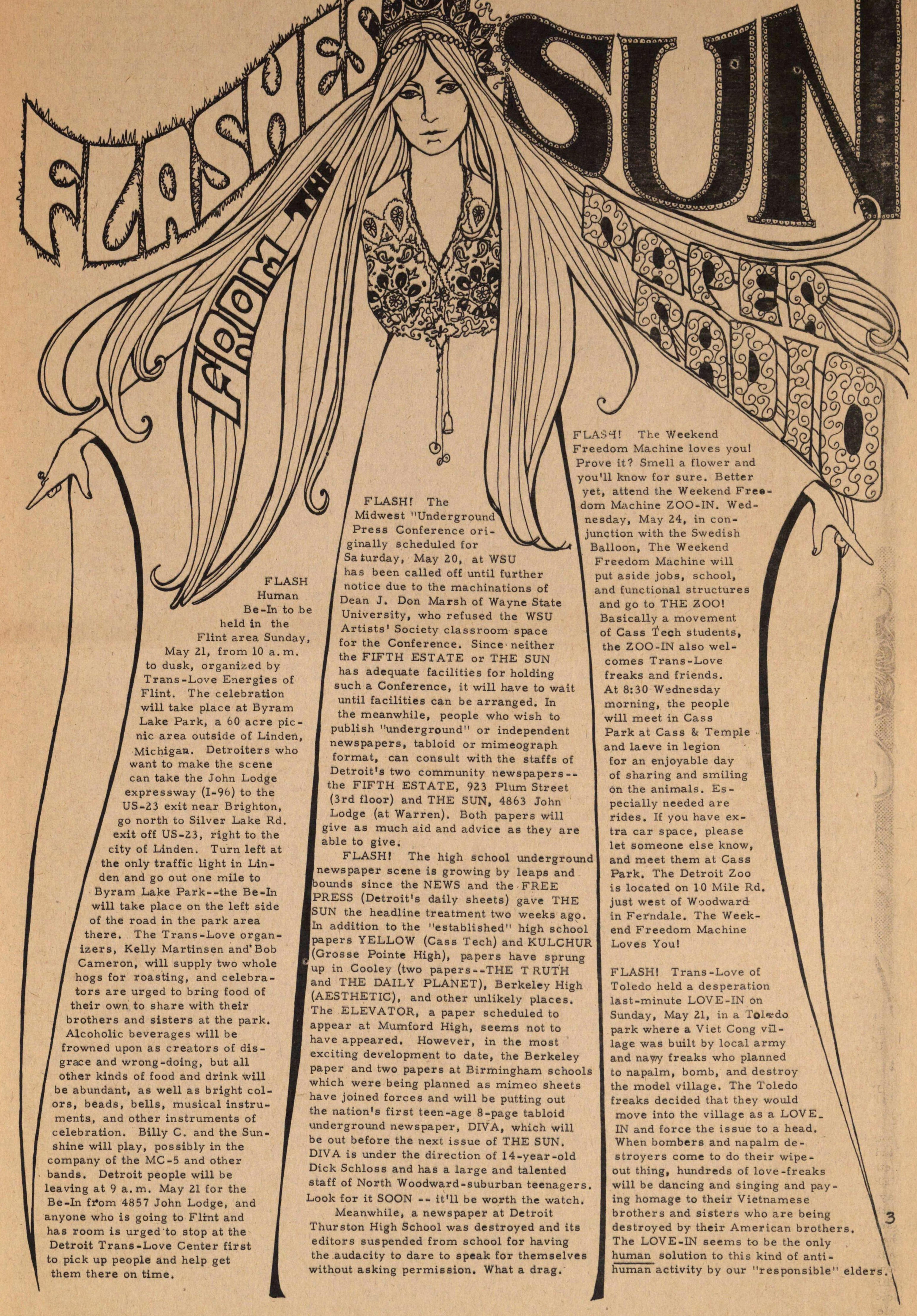 FROM THE PAPER RADIO

FLASH Human Be-In to be held in the Flint area Sunday, May 21, from 10 a.m. to dusk, organized by Trans-Love Energies of Flint. The celebration will take place at Byram Lake Park, a 60 acre picnic area outside of Linden, Michigan. Detroiters who want to make the scene can take the John Lodge expressway (I-96) to the US-23 exit near Brighton, go north to Silver Lake Rd. exit off US-23, right to the city of Linden. Turn left at the only traffic light in Linden and go out one mile to Byram Lake Park -- the Be-In will take place on the left side of the road in the park area there. The Trans-Love organizers, Kelly Martinsen and Bob Cameron, will supply two whole hogs for roasting, and celebrators are urged to bring food of their own to share with their brothers and sisters at the park. Alcoholic beverages will be frowned upon as creators of disgrace and wrong-doing, but all other kinds of food and drink will be abundant, as well as bright colors, beads, bells, musical instruments, and other instruments of celebration. Billy C. and the Sunshine will play, possibly in the company of the MC-5 and other bands. Detroit people will be leaving at 9 a.m. May 21 for the Be-In from 4857 John Lodge, and anyone who is going to Flint and has room is urged to stop at the Detroit Trans-Love Center first to pick up people and help get them there on time.

FLASH! The Midwest "Underground Press Conference originally scheduled for Saturday, May 20, at WSU has been called off until further notice due to the machinations of Dean J. Don Marsh of Wayne State University, who refused the WSU Artists' Society classroom space for the Conference. Since neither the FIFTH ESTATE or THE SUN has adequate facilities for holding such a Conference, it will have to wait until facilities can be arranged. In the meanwhile, people who wish to publish "underground" or independent newspapers, tabloid or mimeograph format, can consult with the staffs of Detroit's two community newspapers -- the FIFTH ESTATE, 923 Plum Street (3rd floor) and THE SUN, 4863 John Lodge (at Warren). Both papers will give as much aid and advice as they are able to give.

FLASH! The high school underground newspaper scene is growing by leaps and bounds since the NEWS and the FREE PRESS (Detroit's daily sheets) gave THE SUN the headline treatment two weeks ago. In addition to the "established" high school papers YELLOW (Cass Tech) and KULCHUR (Gross Pointe High), papers have sprung up in Cooley (two papers -- THE TRUTH and THE DAILY PLANET), Berkeley High (AESTHETIC), and othe unlikely places. The ELEVATOR,  paper scheduled to appear at Mumford High, seems not to have appeared. However, in the most exciting development to date, the Berkeley paper and two papers at Birmingham schools which were being planned as mimeo sheets have joined forces and will be putting out the nation's first teen-age 8-page tabloid underground newspaper, DIVA, which will be out before the next issue of THE SUN. DIVA is under the direction of 14-year-old Dick Schloss and has a large and talented staff of North Woodward-suburban teenagers. Look for it SOON -- it'll be worth the watch.

Meanwhile, a newspaper at Detroit Thurston High School was destroyed and its editors suspended from school for having the audacity to dare to speak for themselves without asking permission. What a drag.

FLASH! Trans-Love of Toledo held a desperation last-minute LOVE-IN on Sunday, May 21, in a Toledo park where a Viet Cong village was built by local army and navy freaks who planned to napalm, bomb, and destroy the model village. The Toledo freaks decided that they would move into the village as a LOVE-IN and force the issue to a head. When bombers and napalm destroyers come to do their wipe-out thing, hundreds of love-freaks will be dancing and singing and paying homage to their Vietnamese brothers and sisters who are being destroyed by their American brothers. The LOVE-IN seems to be the only human solution to this kind of anti-human activity by our "responsible" elders.