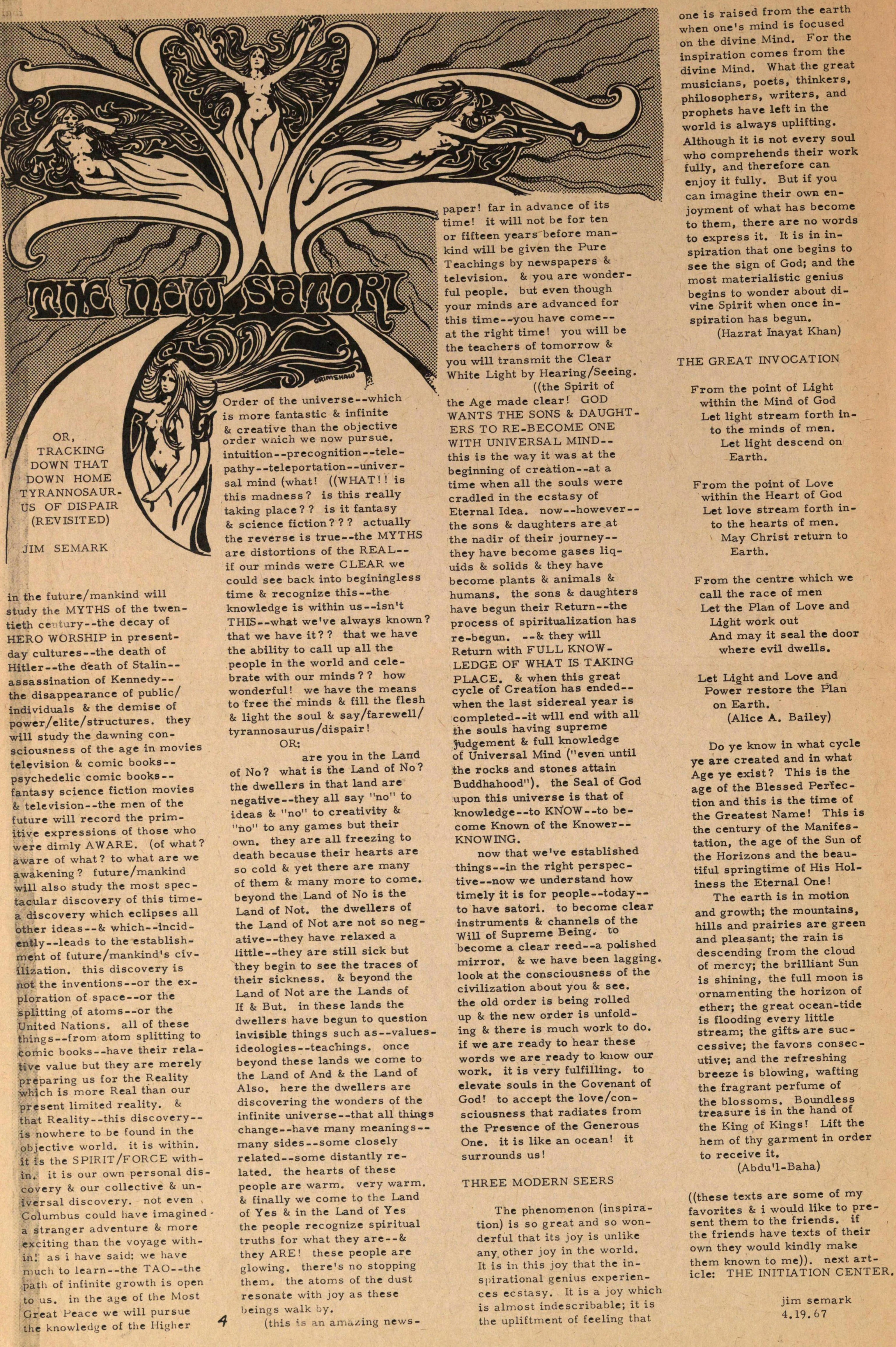 OR, TRACKING DOWN THAT DOWN HOME TYRANNOSAURUS OF DISPAIR (REVISITED)

in the future/mankind will study the MYTHS of the the twentieth century -- the decay of HERO WORSHIP in present-day cultures -- the death of Hitler -- the death of Stalin -- assassination of Kennedy -- the disappearance of public/individuals & the demise of power/elite/structures. they will study the dawning consciousness of the age in movies television & comic books -- psychedelic comic books -- fantasy science fiction movies & television -- the men of the future will record the primitive expressions of those who were dimly AWARE. (of what? aware of whate? to what are we awakening? future/mankind will also study the most spectacular discovery of this time - a discovery which eclipses all other ideas -- & which -- incidentally -- leads to the establishment of future/mankind's civilization. this discovery is not the inventions -- or the splitting of atoms -- or the United Nations. all of these things -- from atom splitting to comic books -- have their relative value but they are merely preparing us for the Reality which is more Real than our present limited reality. & that Reality -- this discovery -- is nowhere to be found in the objective world. it is within. it is the SPIRIT/FORCE within. it is our own personal discovery & our collective & universal discovery. not even Columbus could have imagined a stranger adventure & more exciting than the voyage within. as i have said: we have much to learn -- the TAO -- the path of infinite growth is open to us. in the age of the Most Great Peace we will pursue the knowledge of the Higher Order of the universe -- which is more fantastic & infinite & creative than the objective order which we now pursue. intuition -- precognition -- telepathy -- teleportation -- universal mind (what! (WHAT!! is this madness? is this really taking place?? is it fantasy & science fiction??? actually the reverse is true -- the MYTHS are distortions of the REAL -- if our minds were CLEAR we could see back into beginingless time & recognize this -- the knowledge is within us -- isn't THIS -- what we've always known? that we have it?? that we have the ability to call up all the people in the world and celebrate with our minds?? how wonderful! we have the means to free the minds & fill the flesh & light the soul & say/farewell/tyrannosaurus/dispair!

are you in the Land of No? what is the Land of No? the dwellers in that land are negative -- they all say "no" to ideas & "no" to creativity & "no" to any games but their own. they are all freezing to death because their hearts are so cold & yet there are many of them & many more to come. beyond the Land of No is the Land of Not. the dwellers of the Land of Not are not so negative -- they have relaxed a little -- they are still sick but they begin to see the traces of their sickness. & beyond the Land of Not are the Lands of If & But. in these lands the dwellers have begun to question invisible things such as -- values- ideologies -- teachings. once beyond these lands we come to the Land of And & the land of Also. here the dwellers are discovering the wonders of the infinite universe -- that all things change -- have many meanings -- many sides -- some closely related -- some distantly related. the hearts of these people are warm. very warm. & finally we come to the Land of Yes & in the Land of Yes the people recognize spiritual truths for what they are -- & they ARE! these people are glowing. there's no stopping them. the atoms of the dust resonate with joy as these beings walk by.

(this is an amazing newspaper! far in advance of its time! it will not be for ten or fifteen years before mankind will be given the Pure Teachings by newspapers & television. & you are wonderful people. but even though your minds are advanced for this time -- you have come -- at the right time! you will be the teachers of tomorrow & you will transmit the Clear White Light by Hearing/Seeing.

((the Spirit of the Age made clear! GOD WANTS THE SONS & DAUGHTERS TO RE-BECOME ONE WITH UNIVERSAL MIND -- this is the way it was at the beginning of creation -- at a time when all the souls were cradled in the exstasy of Eternal Idea. now -- however -- the sons & daughters are at the nadir of their journey -- they have become gases liquids & solids & they have become plants & animals & humans. the sons & daughters have begun their Return -- they process of spiritualization has re-begun. --& they will Return with FULL KNOWLEDGE OF WHAT IS TAKING PLACE. & when this great cycle of Creation has ended -- when the last sidereal year is completed -- it will end with all the souls having supreme judgement and full knowledge of Universal Mind ("even until the rocks and stones attain Buddhahood"). the Seal of God upon this universe is that of knowledge -- the KNOW -- to become Known of the Knower -- KNOWING.

now that we've established things -- in the right perspective -- now we understand how timely it is for people -- today -- to have satori. to become clear instruments & channels of the Will of Supreme Being. to become a clear reed -- a polished mirror. & we have been lagging. look at the consciousness of the civilization about you & see. the old order is being rolled up & the new order is unfolding & there is much work to do. if we are ready to hear these words we are ready to know our work. it is very fulfilling. to elevate souls in the Covenant of God! to accept the love/consciousness that radiates from the Presence of the Generous One. it is like an ocean! it surrounds us!

The phenomenon (inspiration) is so great and so wonderful that its joy is unlike any other joy in the world. It is in this joy that the inspirational genius experiences ecstasy. It is a joy which is almost indescribable; it is the upliftment of feeling that one is raised from the earth when one's mind is focused on the divine Mind. For the inspiration comes from the divine Mind. What the great musicians, poets, thinkers, philosophers, writers, and prophets have left in the world is always uplifting. Although it is not every soul who comprehends their work fully, and therefore can enjoy it full. But if you can imagine their own enjoyment of what has become to them, there are no words to express it. It is in inspiration that one begins to see the sign of God; and the most materialistic genius begins to wonder about divine Spirit when once inspiration has begun. (Hazrat Inayat Khan)

From the point of Light

within the Mind of God

Let light stream forth in-

to the minds of men.

From the point of Love

within the Heart of God

Let love stream forth in-

to the hearts of men.

May Christ return to

From the centre which we

call the race of men

Let the Plan of Love and

And may it seal the door

Let Light and Love and

Do ye know in what cycle ye are created and in what Age ye exist? This is the age of the Blessed Perfection and this is the time of the Greatest Name! This is the century of the Manifestation, the age of the Sun of the Horizons and the beautiful springtime of His Holiness the Eternal One!

The earth is in motion and growth; the mountains, hills and prairies are green and pleasant; the rain is descending from the cloud of mercy; the brilliant Sun is shining, the full moon is ornamenting the horizon of ether; the great ocean-tide is flooding every little stream; the gifts are successive; the favors consecutive; and the refreshing breeze is blowing, wafting the fragrant perfume of the blossoms. boundless treasure is in the hand of the King of Kings! Lift the hem of thy garment in order to receive it. (Abdu'l-Baha)

((these texts are some of my favorites & i would like to present them to the friends. if the friends have texts of their own they would kindly make them known to me)). next article: THE INITIATION CENTER.