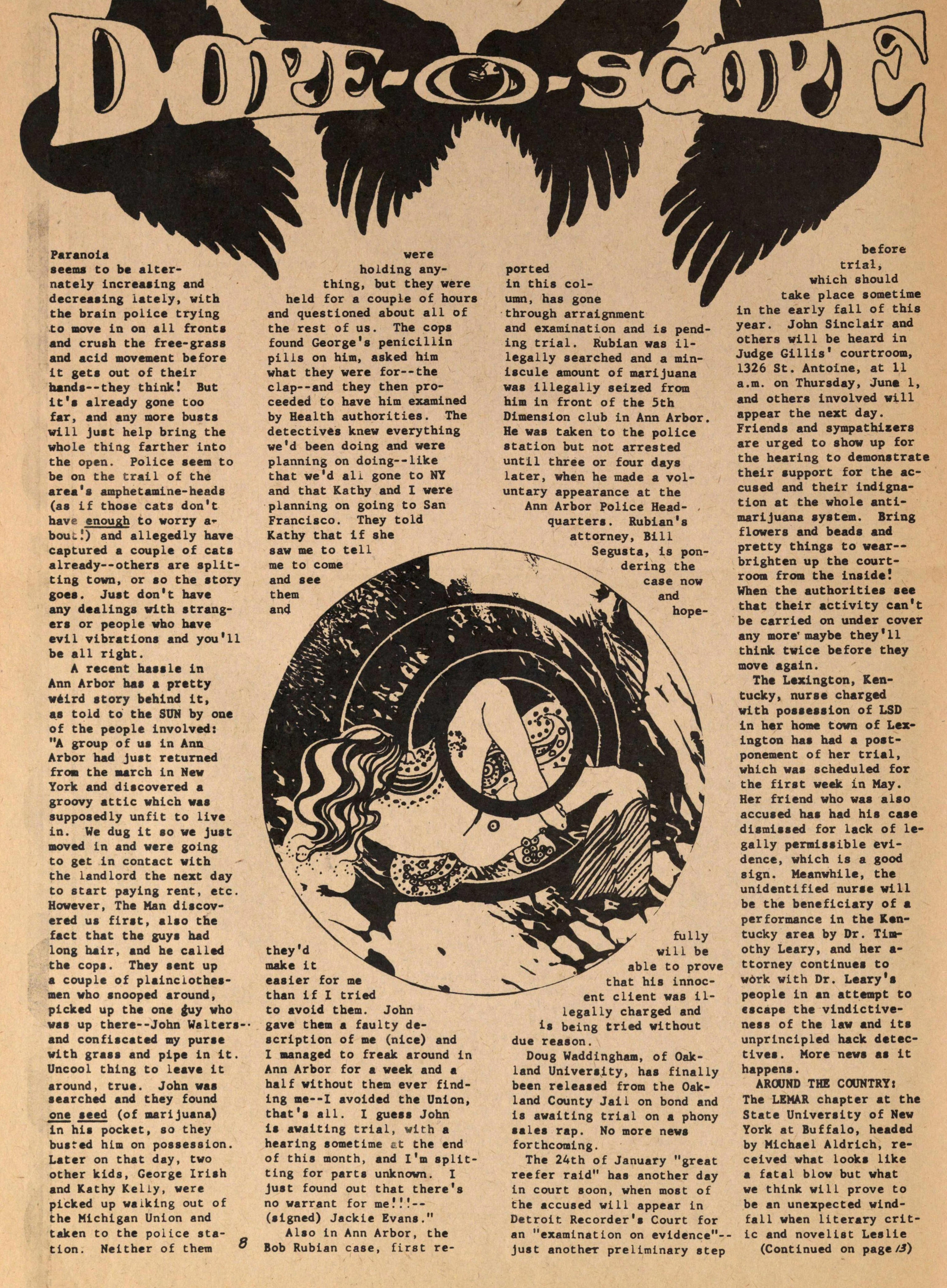 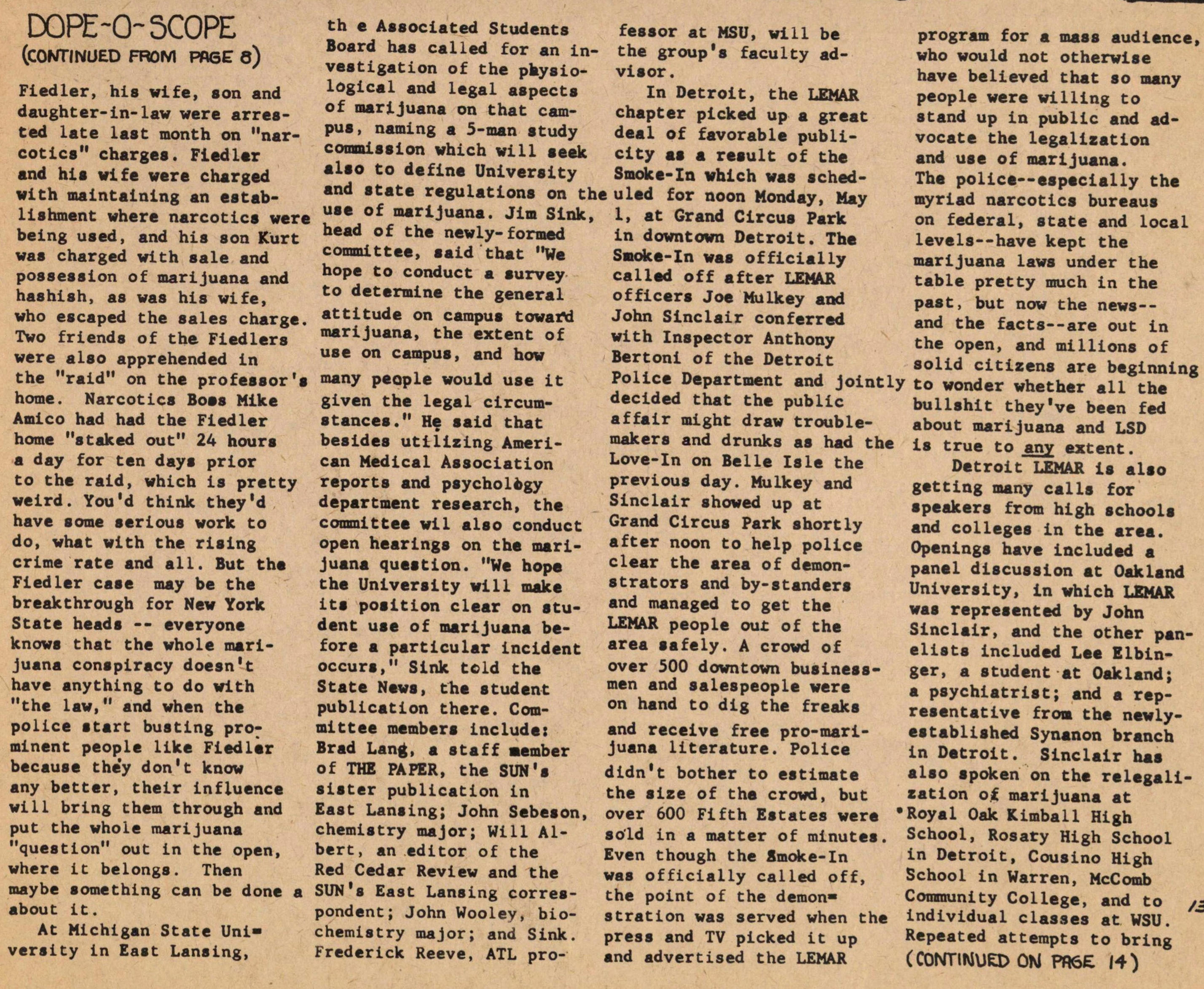 Paranoia seems to be alternately increasing and decreasing lately, with the brain police trying to move in on all front and crush the free-grass and acid movement before it gets out of their hands--they think! But it's already gone too far, and any more busts will just help bring the whole thing farther into the open. Police seem to be on the trail of the area's amphetamine-heads (as if those cats don't have enough to worry about!) and allegedly have captured a couple of cats already - others are splitting town, or so the story goes. Just don 't have any dealings with strangers or people who have evil vibrations and you'll be all right.

A recent hassIe in Ann Arbor has a pretty weird story behind it, as told to the SUN by one of the people involved: "A group of us in Ann Arbor had just returned from the March in Nev York and discovered a groovy attic which was supposedly unfit to live in. We dug it so we just moved in and were going to get in contact with the landlord the next day to start paying rent, etc. However, The Man discovered us first, also the fact that the guys had long hair, and he called the cops. They sent up a couple of plainciothes-men who snooped around, picked up the one guy who was up there--John Walters-and confiscated my purse with grass and pipe in it. Uncool thing to leave it around, true. John was searched and they found one seed (of marijuana) in his pocket, so they busted him on possesslon. Later on that day, two other kids, George Irish and Kathy Kelly, were picked up walking out of the Michigan Union and taken to the police station. Neither of them were holding anything, but they were held for a couple of hours and questioned about all of the rest of us. The cops found George's penicillin pills on him, asked him what they were for--the clap--and they then proceeded to have him examined by Health authorities. The detectives knew everything we'd been doing and were planning on doing--like that we'd all gone to NY and that Kathy and I were planning on going to San Francisco. They told Kathy that if she saw me to tell me to come and see them and they'd make it easier tor me than if I tried to avoid them.  John gave them a faulty description of me (nice) and I managed to freak around in Ann Arbor for a week and a half without them ever finding me--I avoided the Union, that's all. I guess John is awaiting trial, with a hearing sometime at the end of this month, and I'm splitting for parts unknown. I just found out that there's no warrant for me!!-(signed) Jackie Evans."

Also in Ann Arbor, the Bob Rubian case, first reported in this column, has gone through arraignment and examination and is pending trial. Rubian was illegally searched and a miniscule amount of marijuana was illegally seized from him in front of the 5th Dimension club in Ann Arbor. He was taken to the police station but not arrested until three or four days later, when he made a voluntary appearance at the Ann Arbor Police Headquarters. Rubian's attorney, Bill Segusta, is pondering the case now and hopefully will be able to prove that his innocent client was illegally charged and is being tried without due reason.

Doug Waddingham, of Oakland University, has finally been released from the Oakland County Jail on bond and is awaiting trial on a phony sales rap. No more news forthcoming.

The 24th of January "great reefer raid" has another day in court soon, when most of the accused will appear in Detroit Recorder 's Court for an "examination on evidence"-just another preliminary step before trial which should take place sometime in the early fall of this year. John Sinclair and others will be heard in Judge Gillis' courtroom, 1326 St. Antoine, at 11 a.m. on Thursday, June 1, and others involved will appear the next day.

Friends and sympathizers are urged to show up for the hearing to demonstrate their support for the accused and their indignation at the whole anti-marijuana system. Bring flowers and beads and pretty things to wear--brighten up the courtroom from the inside! When the authorities see that their activity can't be carried on under cover any more maybe they'll think twice before they move again.

The Lexington, Kentucky, nurse charged with possession of LSD in her home town of Lexington has had a postponement of her trial, which was scheduled for the first week in May. Her friend who was also accused has had his case dismissed for lack of legally permissible evidence, which is a good sign. Meanwhile, the unidentifled nurse will be the beneficiary of a performance in the Kentucky area by Dr. Timothy Leary, and her attorney continues to work with Dr. Leary's people in an attempt to escape the vindictiveness of the law and its unprincipled hack detectives. More news as it happens.

The LEMAR chapter at the State University of New York at Buffalo, headed by Michael Aldrich, received what look like a fatal blow but what we think will prove to be an unexpected windfall when literary critic and novelist Leslie (Continued on page 13)

Fiedler, his wife, son and daughter-in-law were arrested late last month on "narcotics" charges. Fiedler and his wife were charged with maintaining an establishment where narcotics were being used, and his son Kurt was charged with sale and possession of marijuana and hashish, as was his wife, who escaped the sales charge. Two friends of the Fiedlers were also apprehended in the "raid" on the professor's home. Narcotics Boss Mike Amico had had the Fiedler home "staked out" 24 hours a day for ten days prior to the raid, which is pretty weird. You'd think they'd have some serious work to do, what with the rising crime rate and all. But the Fiedler case may be the break through for New York State heads -- everyone knows that the whole marijuana conspiracy doesn't have anything to do with "the law," and when the police start busting prominent people like Fiedler because they don't know any better, their influence will bring them through and put the whole marijuana "question" out in the open, where it belongs. Then maybe something can be done about it.

At Michigan State University in East Lansing, the Associated Students Board has called for an investigation of the physiological and legal aspects of marijuana on that campus, naming a 5-man study commission which will seek also to define University and state regulations on the use of marijuana. Jim Sink, head of the newly-formed committee, said that "We hope to conduct a survey to determine the general attitude on campus toward marijuana, the extent of use on campus, and how many people would use it given the legal circumstances." He said that besides utilizing American Medical Association reports and psychology department research, the committee will also conduct open hearings on the marijuana question. "We hope the University will make its position clear on student use of marijuana before a particular incident occurs," Slnk told the State News, the student publication there. Committee members include: Brad Lang, a staff member of THE PAPER, the SUN 's sister publication in East Lansing; John Sebeson, chemistry major; Will Albert, an editor of the Red Cedar Review and the SUN 's East Lansing correspondent; John Wooley, biochemistry major; and Sink. Frederick Reeve, ATL professor at MSU, will be the group's faculty advisor.

In Detroit, the LEMAR chapter picked up a great deal of favorable publicity as a result of the Smoke-In which as scheduled for noon Monday, May 1, at Grand Circus Park in downtown Detroit. The Smoke-In was officially called off after LEMAR officers Joe Mulkey and John Sinclair conferred with Inspector Anthony Bertoni of the Detroit Police Department and jointly decided that the public affair might draw trouble-makers and drunks as had the Love-In on Belle IsIe the previous day. Mulkey and Sinclair showed up at Grand Circus Park shortly after noon to help police clear the area of demonstrators and by-standers and managed to get the LEMAR people out of the area safely. A crowd of over 500 downtown businessmen and salespeople were on hand to dig the freaks and receive free pro-marijuana literature. Police didn't bother to estimate the size of the crowd, but over 600 Fifth Estates were sold in a matter of minutes. Even though the Smoke-In was officially called off, the point of the demonstration was served when the press and TV picked it up and advertised the LEMAR program for a mass audience, who would not otherwise have believed that so many people were willing to stand up in public and advocate the legalization and use of marijuana. The police- -especially the myriad narcotics bureaus on federal, state and local levels--have kept the marijuana laws under the table pretty much in the past, but now the news-and the facts - are out in the open, and millions of solid citizens are beginning to wonder whether all the bullshit they've been fed about marijuana and LSD is true to any extent . Detroit LEMAR is also getting many calls for speakers from high schools and colleges in the area. Openings have included a panel discussion at Oakland University, in which LEMAR was represented by John Sinclair, and the other panelists included Lee Elbinger, a student at Oakland; a psychiatrist; and a representative from the newly-established Synanon branch in Detroit. Sinclair has also spoken on the re-legalization of marijuana at Royal Oak Kimball High School, Rosary High School in Detroit, Cousino High School in Warren, McComb Community College, and to individual classes at WSU. Repeated attempts to bring (CONTINUED ON PAGE 14)

Sinclair into Grosse Pointe for a talk at the War Memorial there have met with increasing opposition from school and village officials--two scheduled appearances have been cancelled, the most recent being May 15.

Reprinted below is the statement drafted and endorsed by the members of the National Student Association at their national convention last August. Poet Allen Ginsberg, invited to address the Conference, was instrumental in getting the proposal approved, and offered much evidence in support of the total legalization of marijuana - so much, in fact, that the NSA members had no choice but endorse his views. The resolution is as follows, courtesy of Mike Aldrich and Buffalo LEMAR:

USNSA declares its concern for and interest in the health, safety and welfare of American students who have been involved in the use of psychedelic substances, including marijuana, for personal aesthetic, religious or social reasons. USNSA feels that the public reaction to this involvement (including that of the mass media, members of law enforcement agencies, other government officials, legislators, and public leaders) has been at times unreasonable, uninformed, and prejudicial. USNSA feels that one of the elements primarily responsible for generating this reaction are sections of the news media which have permitted distorted and exaggerated stories to over-ride responsible journalism.

USNSA furthermore feeIs that the activities of the Federal Narcotics Bureau, over a long period of time, have resulted in a well-intentioned misguiding of the American public and in the enactment of legislation on marijuana of the most harsh and unjust sort . Therefore, USNSA recommends swift reconsideration and revision of Federal legislation to rectify the prohibitive nature of the Marijuana Tax Act of 1937. Furthermore, in order to end punishment for violation of existing state and local laws, USNSA recommends repeal of all state legislation which prohibits the consumption and possession of marijuana for personal use. . . .