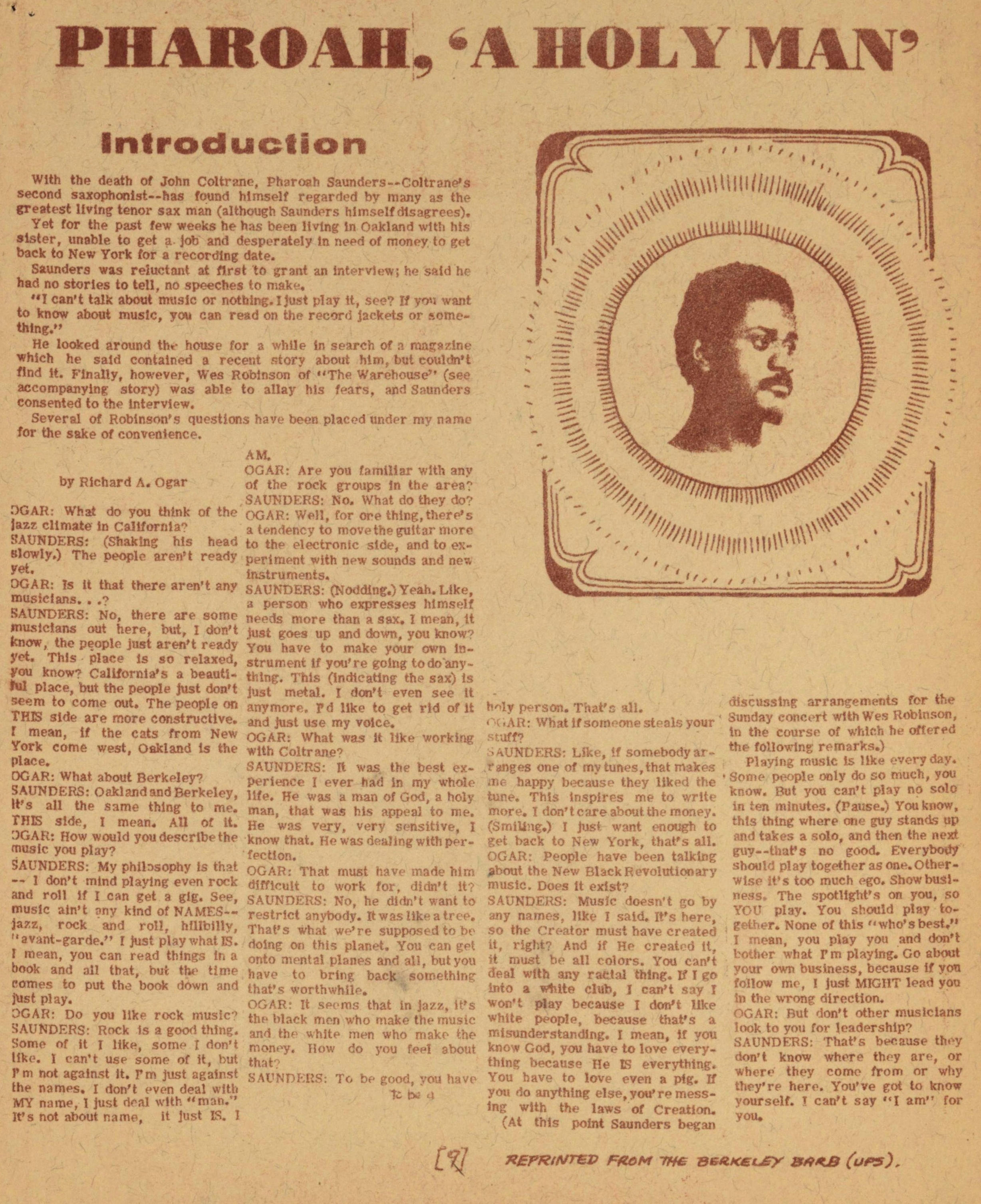 With the death of John Coltrane, Pharoah Saunders- Coltrane's second saxophonist -- has found himself regarded by many as the greatest living tenor sax man (although Saunders himself disagrees).

Yet for the past few weeks he has been living in Oakland with his sister, unable to get a job and desperately in need of money to get back to New York for a recording date.

Saunders was reluctant at first to grant an interview; he said he had no stories to tell, no speeches to make.

"I can't talk about music or nothing. I just play it, see? If you want to know about music, you can read on the record jackets or something."

He looked around the house for a while in search of a magazine which he said contained a recent story about him, but couldn't find it. Finally, however, Wes Robinson of "The Warehouse" (see accompanying story) was able to allay his fears, and Saunders consented to the interview.

Several of Robinson's questions have been placed under my name for the sake of convenience.

by Richard A. Ogar

OGAR: What do you think of the Jazz climate in California?

SAUNDERS: (Shaking his head slowly.) The people aren't ready yet.

SAUNDERS: No, there are some musicians out here, but, I don't know, the people just aren't ready yet. This place Is so relaxed, you know? California's a beautiful place, but the people just don't seem to come out. The people on THIS side are more constructive. I mean, if the cats from New York come west, Oakland is the place.

OGAR: What about Berkeley?

SAUNDERS: Oakland and Berkeley, It's all the same thing to me. THIS side, I mean. All of it.

OGAR: How would you describe the music you play?

SAUNDERS: My philosophy is that -- I don't mind playing even rock and roll if I can get a gig. See, music ain't any kind of NAMES -- jazz, rock and roll, hillbilly, "avant-garde." I just play what IS. I mean, you can read things in a book and all that, but the time comes to put the book down and just play.

SAUNDERS: Rock is a good thing. Some of it I like, some I don't like. I can't use some of it, but I'm not against it. I'm just against the names. I don't even deal with MY name, I just deal with "man." It's not about name, it just IS. I AM.

OGAR: Are you familiar with any of the rock groups In the area?

SAUNDERS: No. What do they do?

OGAR: Well, for one thing, there's a tendency to move the guitar more to the electronic side, and to experiment with new sounds and new Instruments.

SAUNDERS: (Nodding.) Yeah. Like, a person who expresses himself needs more than a sax. I mean, lt just goes up and down, you know? You have to make your own instrument if you're going to do anything. This (indicating the sax) is just metal. I don't even see it anymore. I'd like to get rid of it and just use my voice.

SAUNDERS: lt was the best experience I ever had In my whole life. He was a man of God, a holy man, that was his appeal to me. He was very, very sensitive, I know that. He was dealing with perfection.

OGAR: That must have made him difficult to work for, didn't lt?

SAUNDERS: No, he didn't want to restrict anybody. It was like a tree. That's what we're supposed to be doing on this planet. You can get onto mental planes and all, but you have to bring back something that's worthwhile.

SAUNDERS: To be good, you have to be a hoIy person. That's all.

OGAR: What if someone steals your stuff?

SAUNDERS: Like, if somebody arranges one of my tunes, that makes me happy because they liked the tune. This Inspires me to write more. I don't care about the money. (Smiling.) I just want enough to get back to New York, that's all.

OGAR: People have been talking about the New Black Revolutionary music. Does It exist?

SAUNDERS: Music doesn't go by any names, like I said. It's here, so the Creator must have created it, right? And if He created it, it must be all colors. You can't deal with any racial thing. If I go into a White club, I can't say I won't play because I don't like white people, because that's a misunderstanding. I mean, if you know God, you have to love everything because He IS everything. You have to love even a pig. If you do anything else, you're messIng with the laws of Creation. (At this point Saunders began discussing arrangements for the Sunday concert with Wes Robinson, in the course of which he offered the following remarks.)

Playing music is like everyday. Some people only do so much, you know. But you can't play no solo in ten minutes. (Pause.) You know, this thing where one guy stands up and takes a solo, and then the next guy -- that's no good. Everybody should play together as one. Otherwise it's too much ego. Show business. The spotlight's on you, so  YOU play. You should play together. None of this "who best." I mean, you play you and don't bother what I'm playing. Go about your own business, because if you follow me, I just MIGHT lead you in the wrong direction.

OGAR: But don't other musicians look to you for leadership?

SAUNDERS: That's because they don't know where they are, or where they come from or why they're here. You've got to know yourself. I can't say "I am" for you.

Reprinted from the Berkely Barb (UPS).